Introduction and the ASUS EN9600 Silent

Even with new GPUs from both AMD and NVIDIA the GeForce 9600 GT is very appealing. Price drops and a large variety of cards featuring passive coolers, overclocked cores and custom heatsinks have expanded the 9600GT market to offer someone for just about everyone. If you are looking for a new budget graphics card check out out roundup of options.

To PC gamers the most coveted spot in the hardware world usually lies with the top mid-range graphics card.  No other product is upgraded quite as often as the GPU and since most users don’t live on infinite budgets or feel the desire to spend $600 every few months for gaming hardware, the 9600 GT card from NVIDIA has been a great success since its introduction.

When we originally took a look at the GeForce 9600 GT I was impressed by the GPU’s performance the card’s value even though at the time the AMD Radeon HD 3870 was a very good choice as well.  Since then, both of those cards’ prices have dropped dramatically but the 9600 GT seems to have had the better run.

In this roundup we will be comparing a few of the latest 9600 GT models from ASUS and XFX that differ from reference designs in one way or the other in order recommend a good solution for anyone looking to the 9600 GT for their next graphics card purchase.

Our first 9600 GT sample comes from ASUS and offers a unique feature: silence. As the name implies this card is passively cooled and does not include any fans. 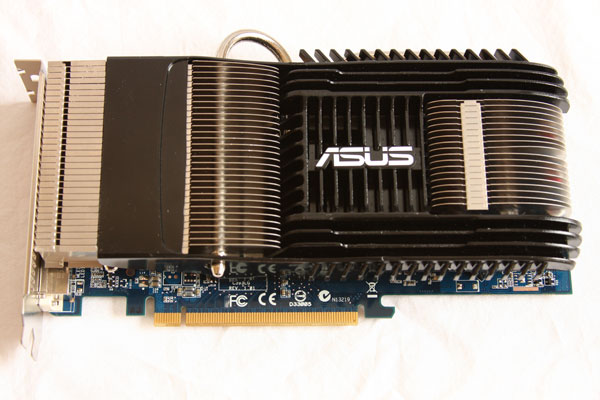 Obviously that doesn’t mean the GPU isn’t creating the same amount of heat so the heatsink that ASUS is using on the card is much larger than that found on other 9600 GT cards. A heatpipe helps to bring the energy out from the GPU to the larger fins along the front of the card while some “cast iron” black molding covers up some more aluminum fins towards the rear. 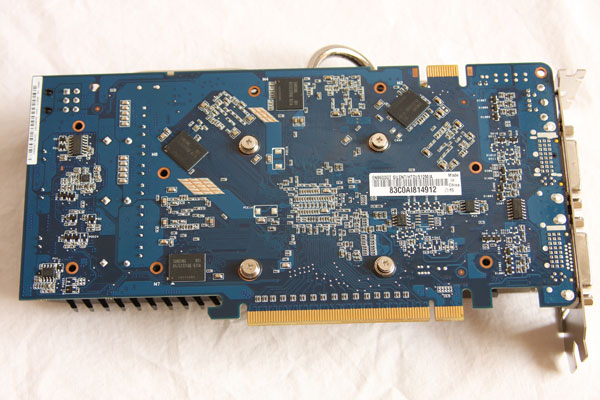 You can see that the heatsink on the ASUS EN9600 GT Silent isn’t much heavier than the standard cooling solution since it still is only using four retention screws. The memory chips on the rear are left uncovered as well but we didn’t have any problems with stability at all. 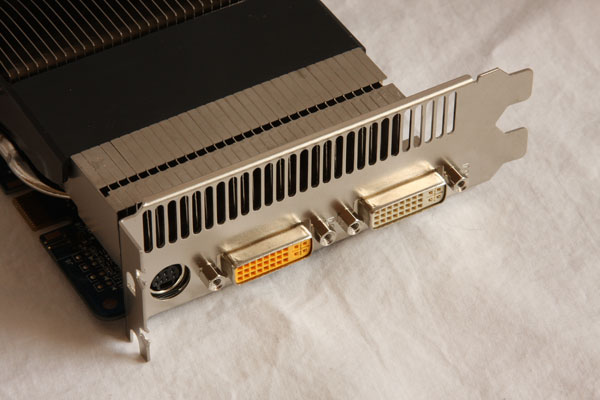 Because of the need for the larger heatsink, the ASUS EN9600 GT Silent card does take up to two case slots with its passive design.  The reference 9600 GT cards only take up one slot – so if this is a major concern for you then check out the other cards in this roundup.

There are two dual-link DVI outputs on the 9600 GT as well as a TV-output that supports HDTV output with an included dongle.  The yellow DVI connection is the one that can be connected to the DVI-to-HDMI adapter for integrated audio and video output. 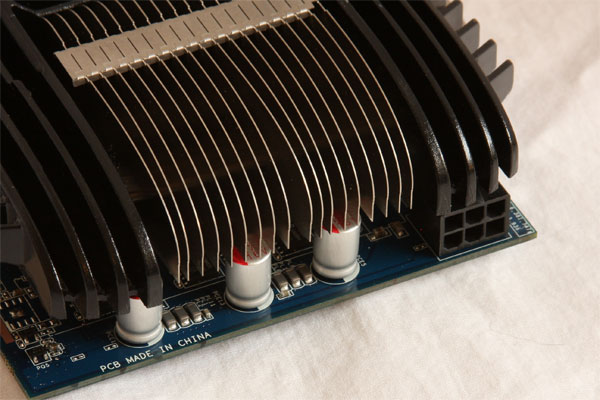 The single 6-pin power connector that the 9600 GT cards require is hidden behind the heatsink pretty well.  The close proximity to the heatsink can cause a bit of a hassle when trying to disconnect the power cable but nothing too dramatic. 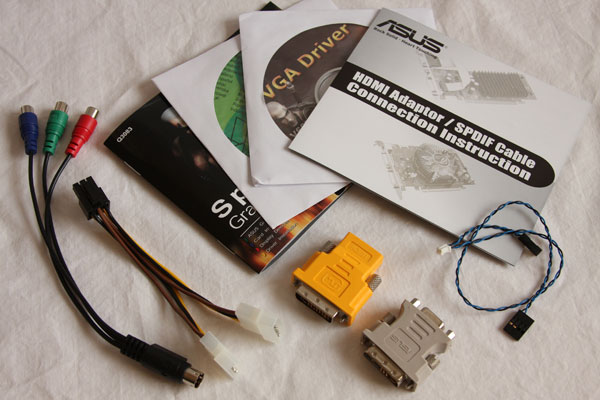 The ASUS EN9600 GT Silent comes with a good mix of extras, though ASUS has apparently stopped included copies of any games with their GPUs. In the box instead you’ll find an HDTV output dongle, a Molex to PCIe power adapter, driver discs, a DVI-to-VGA adapter, the afore-mentioned DVI-to-HDMI dongle and the SPDIF audio cable (the real thin one) that needs to go from your sound system to your video card.  That is required for audio pass through from the HDMI connection.

The ASUS EN9600 GT Silent is the only card in our roundup of three that runs at reference speeds – 650 MHz core clock, 1625 MHz shader clock and 900 MHz memory clock.  Instead of spending time on overclocking this model ASUS decided to focus on the cooling aspect – getting the GPU to run completely passively is pretty impressive even at reference speeds.

Shoving a little extra memory in