I’m Back in the Middle Again…

Getting a Good Vantage

My final call of the day was to Oliver Baltuch, who is President of Futuremark, makers of the 3D Mark series.  Just making sure that was perfectly clear.

I asked Oliver straight up, “Do you think NVIDIA is cheating.”  His answer was clear and concise.  No.  NVIDIA was not breaking any of the rules that Futuremark has set up for its members of the program, and NVIDIA releasing a non-official driver, which exposes this functionality, does not go against the rules.  This is mainly because all members need to submit their drivers to Futuremark to assess their quality and make sure there is no funny business going on before they can be approved.  Once the drivers are approved, then the results from those benchmark runs can be considered official and be submitted to ORB.

The development of 3D Mark is an open one for its members.  Each member of the group has the ability to send its programmers to Finland to go over the source code of the current and past 3D Marks, while in the presence of the Futuremark programmers.  This means that guys from NVIDIA can go over the source code and make sure there are no lines in there that basically say “if AMD GPU then 2X score in Test 2” or some such.  If there are problems with the code, then all members have the ability to bring up the issues and hopefully correct them.  It is a transparent process, and if the guys from AMD or NVIDIA try to pull something, then the folks from places like Dell, HP, IBM and others object.  The oversight is pretty tremendous, and Futuremark appears to be handling this as best they can. 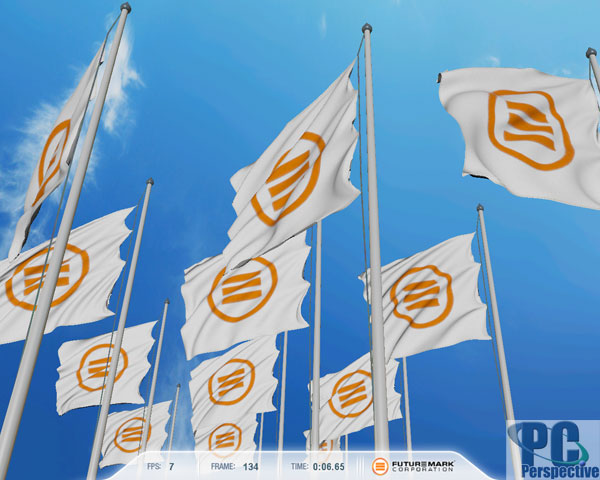 Cloth simulation on the GPU in 3DMark Vantage – not PhysX related


Oliver was of the opinion that GPU accelerated physics is going to be a boon to game development, and something that consumers and users will find unique and appealing.  The immersion factor that goes along with a well done physics system is tremendous.  Half Life 2 had some truly spectacular effects that were physics based, and a lot of the gameplay revolved around puzzles which featured physics as the solution.  That is really only the tip of the iceberg, and the amount of effects that can go into a modern game is pretty stunning, as long as the horsepower is there under the hood to make it playable.  By NVIDIA implementing GPU accelerated physics, they are opening up these worlds to developers and users alike.

“The driver in question (177.39- Ed.) has not been submitted for authorization and is only for demo purposes. NVIDIA has followed the correct rules for driver authorization and the BDP by sending us the 177.35 driver (the same as AMD has sent us the 8.6 driver), both of which are currently undergoing the Authorization process in our Quality Assurance area at this moment. Only drivers that have passed WHQL and our driver Authorization Process have comparable results that will be allowed for use in our ORB database and hall of fame.   Other drivers which have not been submitted will not be commented on. Otherwise, we would have to inspect every Beta and press driver that is released. Outside of this matter, we have been introduced to this technology from NVIDIA and it is truly innovative for future games.”

The long and short of it is NVIDIA has not broken any rules, they did not cheat, and they are using this driver and 3D Mark Vantage as a technology demonstration.

Do I feel that NVIDIA is cheating?  I personally do not.  I think the language that came from the “NVIDIA is Cheating Again” article is pretty much over the top.  When viewed as a technology demonstration, NVIDIA is merely showing us what it is able to do with the technology they bought (Ageia) and the products they are producing.  Yes, it raises the score for 3D Mark Vantage, but not more so than having a dedicated PPU also installed.

From what NVIDIA indicated, they would like to work with AMD on PhysX.  I have received comments from both sides that it was the other’s fault that they were not working together, but hopefully things will have calmed down and some actual work can go on between them.  It really is in both of their interests to work together on this, and perhaps PhysX can become the defacto physics API someday.  I’m not holding my breath on that one.  But by creating multiple standards, then developers have a hard time coding to each standard, and consumers can get confused about who supports what.  I think that AMD and NVIDIA working together on PhysX would be a boon for developers and consumers alike, and then neither company would have to worry nearly as much about what Intel is doing with Larabee and Havok.

All is not rosy with the driver though.  While it works correctly with 3D Mark Vantage, to get it to work with UT3 a PhysX .dll has to be overwritten in the UT3 directory.  I also attempted to test this driver with two other PPU enabled titles.  Ghost Recon Advanced Warfighter and Cell Factor Revolutions do not support the usage of GPU Physics.  For these titles it is either a dedicated PPU or nothing.  These drivers are not a drop in replacement for a dedicated PPU for the majority of titles that support it (admittedly only a handful).  To work correctly the applications need to be rewritten to support GPU physics.  In NVIDIA’s defense though, the PhysX SDK is the exact same as what is currently available except it adds the GPU physics support.

While this was primarily an article dealing with “much ado about nothing” I did discover some nice pieces of information about the future of physics from both sides.  Once things calm down a bit, and developers get more comfortable with enabling higher quality physics in their games, then perhaps we will see a new revolution on the PC gaming side of things.