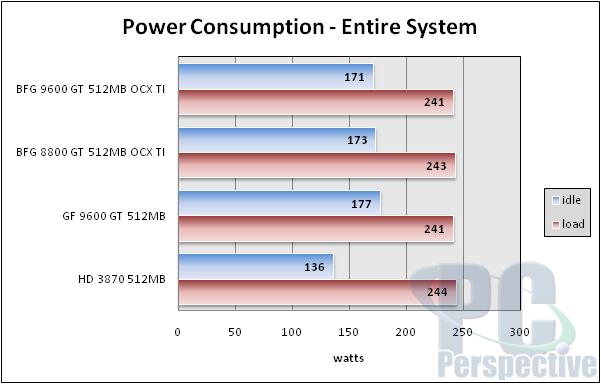 This is pretty interesting – all the graphics cards from NVIDIA are basically using the same amount of power at load and idle.  Obviously all of these GPUs are based on the same architecture though I did expect to see the 9600 GT G94 die to draw less power since it does have a noticeable performance drop compared to the 8800 GT.

The overclocked claims of the BFG OCX TI cards definitely lived up to those claims.  Looking at the 9600 GT OCX TI model on its own, there were noticeable performance gains compared to the standard 9600 GT card pretty much across all of our tests.  These weren’t a couple of percentage points boost either – 12% better average framerates seemed to be the norm; that can definitely impact our gaming experiences during testing.

The performance on the 8800 GT was also impressive – after all the 9-series releases we really forgot what a good performer the 8800 GT card really is!  The overclocked clocks definitely help put a shine on the numbers as well and the BFG OCX card is easily walking over the AMD Radeon HD 3870 512MB cards.

Obviously at their core there is nothing new about the technology behind either of these BFG graphics boards.  What you are getting in this latest, and probably final, release of the 9600 GT and 8800 GT is a nearly perfected cooling design and clock rate balance.  The cooler that BFG chose to use is noticeably more effective than the stock cooler while maintaining moderating sound levels and presenting you with a “cool” green LED light to boot. 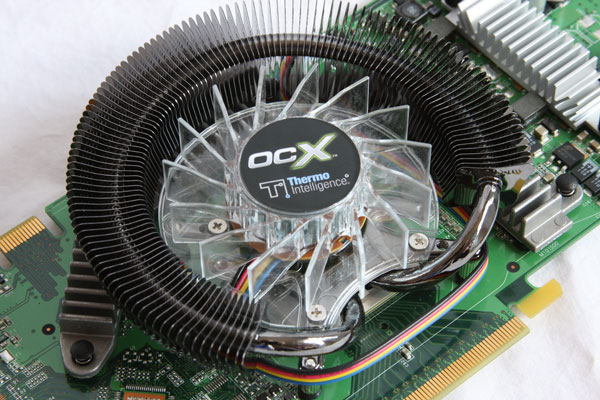 We also can’t gloss over the support that BFG has pledged to the gamer and enthusiast since the company’s founding years ago.  With all BFG graphics cards you get a lifetime 24/7 warranty and support system that includes phone and email support.  Just recently BFG added a trade-up program that lets you return your current BFG graphics card for credit towards an upgraded model within 90 days of your original purchase.  So, if you picked up an 8800 GT OCX TI then later decided that you wanted to splurge for the GTX 280 1GB card you would get full credit for the previously purchased card!  If you are a frequent GPU buyer you’ll definitely want to look into this option.

Looking at the prices of these cards today, you can find the BFG 8800 GT OCX TI card for $159 after mail-in rebate and the 9600 GT OCX TI for $149 after mail-in rebate.  If you compare this to reference card prices you can find some stock 8800 GT cards still selling for about $145 and stock 9600 GT cards for just about $129; so despite the custom coolers and high overclocks, the BFG cards pretty competitvely priced against the competing brands.

We have seen the HD 3870 512MB cards quickly drop to the $135 range and with the release of the new HD 4850 card priced from about $190, the sub-$200 GPU market is indeed getting VERY crowded.  Overall though I think the 8800 GT OCX TI card from BFG offers a great mix of performance and price that is hard to argue with today.

Though they might seem outdated we have to say that both the BFG GeForce 8800 GT and 9600 GT OCX ThermoIntelligence graphics cards have some life left them, just as we proved in our recent 9600 GT roundup article.  It is true that there are a BUNCH of graphics options huddled around the $150-$250 price mark now and that could make your decision a bit more clouded than we’d like but it really comes down to your exact budget and performance desires.  BFG has put both the 8800 GT and 9600 GT OCX TI cards in a very good position with pricing but I would definitely lean towards the 8800 GT OCX model as being the best value in our comparison; that’s a lot of extra performance for just $10.