Readings were taken using a P3 – Kill A Watt digital meter at the power receptacle. The system was placed under full load by looping Crysis demos, running prime95 on each CPU core and performing a system virus scan. 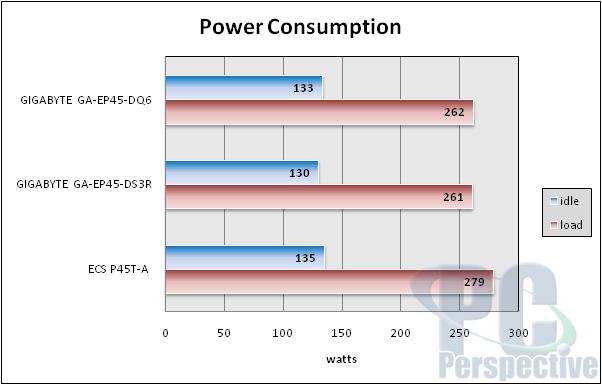 The Power Consumption on the EP45-DQ6 was lower than the ECS P45T-A, and on par with the EP45-DS3R. The LAN ports not in used were turned off by the Green LAN feature and thus power efficiency was adequate. Keep in mind, this is without any of the DES energy saving features enabled, so that the boards would all be on the same playing field. If you choose to take advantage of the DES features, larger power conservation gains are there to be had, albeit with a decrease in performance.

When it comes to overclocking no two people, or two samples for that matter, are alike. Overclocking is like a fine wine, everyone’s taste is going to be different. Overclocking results vary greatly between equipment and users. Some tweakers prefer to run insane voltages to reach extremely high FSB. Some overclockers prefer to run a reasonable voltage to facilitate a safer 24/7 overclock. I fit into the latter category, and always approach my overclock sections with the before mentioned strategy. All settings are tested under an 8 hour torture test with prime 95 running to max out the CPU, and 3Dmark lopping to max out the power draw on the system. However, OC mileage will vary from sample to sample and system to system. Here is my final result: 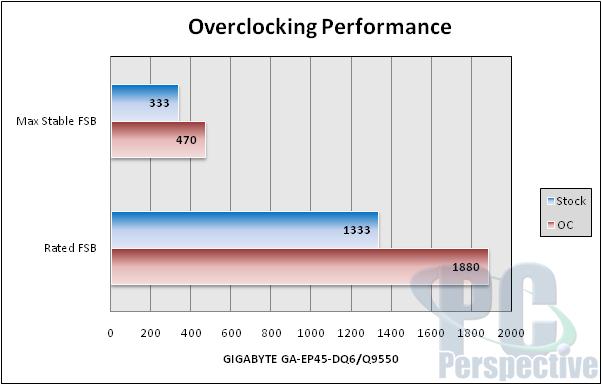 By lowering the CPU ratio to 6X and some slight voltage adjustments, I was able to push to the FSB ceiling up to 470 FSB, from the stock setting of 333 FSB. The second numbers merely reflect the Quad pumped ratings of the FSB. The CPU was not a limiting factor, because with the 6X multiplier in effect, the CPU was actually slightly below its stock core clock at this FSB. The Quad core CPU’s stress the power regulation circuitry slightly more than a comparable dual core, so FSB ceilings tend to be lower with Quad cores in use. This chipset had more room to go, but with a already warm running chipset, I didn’t feel pushing voltages higher would yield a OC with system longevity in mind. Once again Results will vary greatly between samples and users themselves.