After seeing the first two days of NVISION08 we summarize our thoughts about the keynotes and sessions so far. Come read NVIDIA’s view of how the GPU will look in 2013 and see a real-time ray tracer running via CUDA on the GT200.

NVISION08 is NVIDIA’s first conference for visual computing and is turning out to be pretty impressive in scope thus far.  Including keynotes from key industry personnel, technical sessions from the brightest minds inside and outside of NVIDIA, a huge gaming LAN Party, showcase of partner technologies and professional gaming competition.  That’s a lot of stuff!

The firs thing on our schedule was the keynote from NVIDIA CEO Jen-Hsun Huang.  More popular (or notorious) now than ever after the infamous “whoop-ass” quote in relation to Intel, Huang is making sure that he is doing everything he can to make NVIDIA a key component in the future of visual computing. 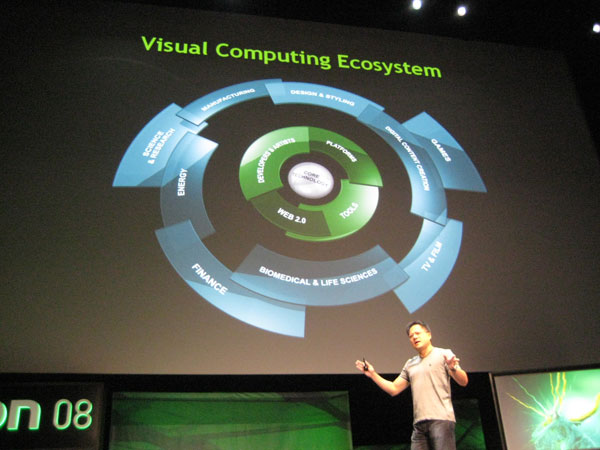 Looking at the visual computing ecosystem there are a lot of facets that NVIDIA will or does have their hand in.  Besides the obvious part that is gaming there are biomedical, finance and energy modeling segments that utilize the power of highly-parallel processing and visual elements. 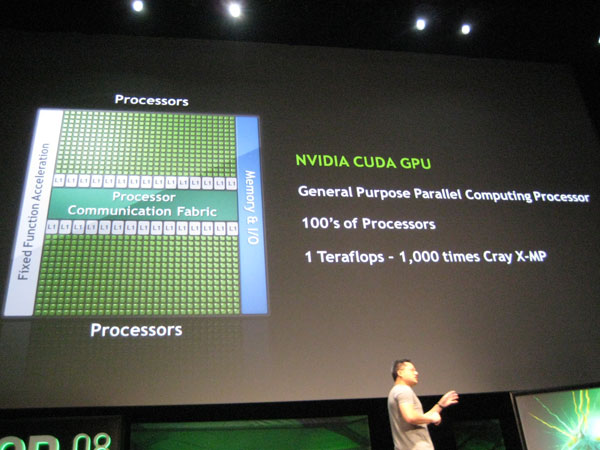 In order to get people in the right mind set for the discussion Huang showed off a new way to visualizing the GT200 GPU.  This diagram shows each of the 240 stream processors individually with standard L1 cache around it and a “processor communication fabric” between them all.  If you have read over our own GT200 review from earlier in the year you’ll know that the GPU isn’t really laid out like this and has blocks/segments and is slightly less granular than this diagram appears.

One of the first things Huang discussed was their work with Folding@Home – with just about 24k GPUs working on the project NVIDIA calculates that 1,400 TeraFlops are available to the Stanford team while the 2.6 million CPUs that work on Folding@Home are only provided 288 TeraFlops. 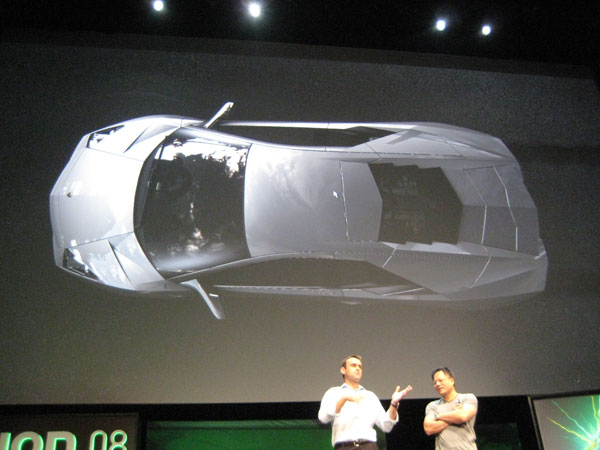 Rather than show a lot of gaming demos, you’ll see that Huang and NVIDIA were focused more on the entire NVIDIA ecosystem – from the professional level to the research level.  Here we have RTT showing off their virtual modeling and design of the Lamborghini Reventon supercar; a model was never built by hand until the design was completely done in 3D.  In fact, all of the 20 buyers of this car ordered them based purely on these 3D designs. 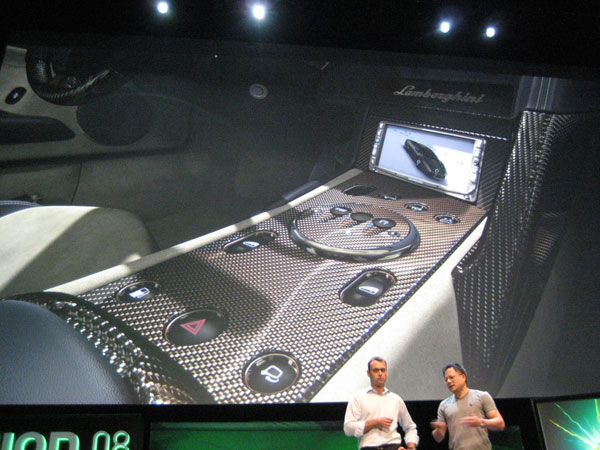 Here is another shot of the interior of the Reventon.  Damn sexy… 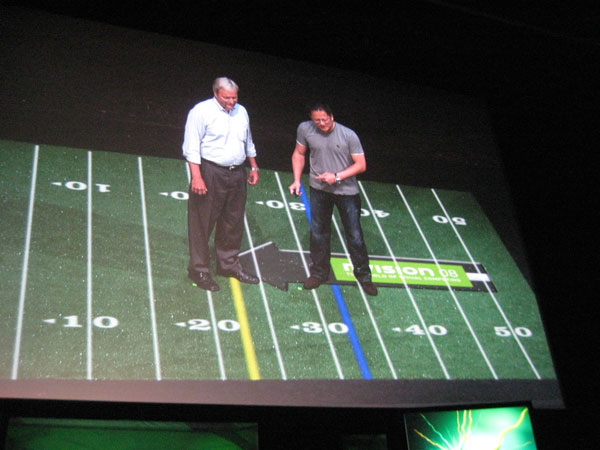 Any football fan will recognize the technology on display here where Huang and the CTO of Sport Vision are standing.  This is yet another application of visual computing. 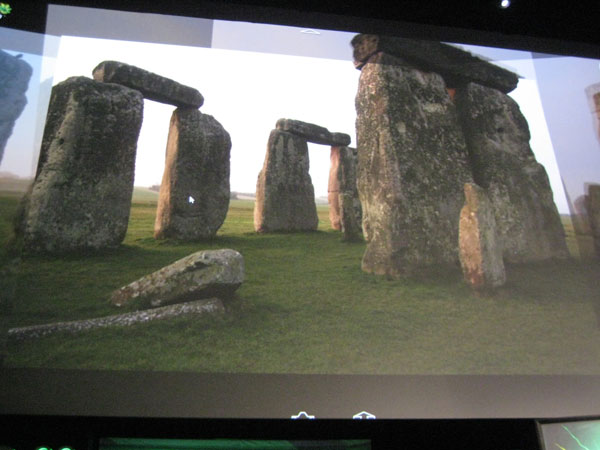 Microsoft’s PhotoSynth has been getting a lot of attention since it’s release to public just last week.  The technology allows users to stitch together photos from the same location so that you can create a 3D interactive environment to move around in and explore.  If you haven’t checked out the technology before on your PC or in a video demo, I highly recommend it. 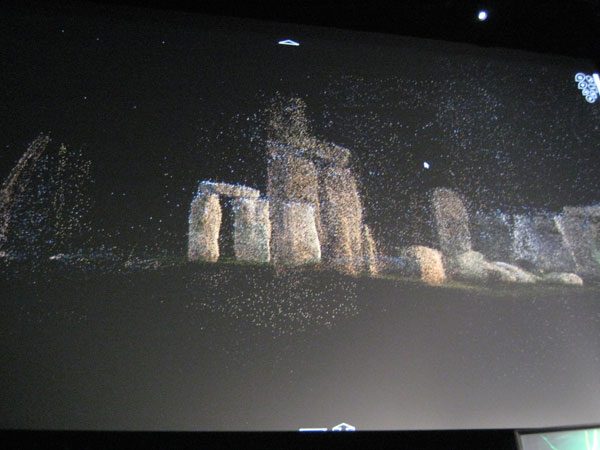 The PhotoSynth application actually creates a “point cloud” in order to match photos with each other.  Each dot you see represents a specific pixel on one picture that it can use to match up with specific point in another photograph.  I kind of relate it to how a fingerprint is diagnosed and matched. 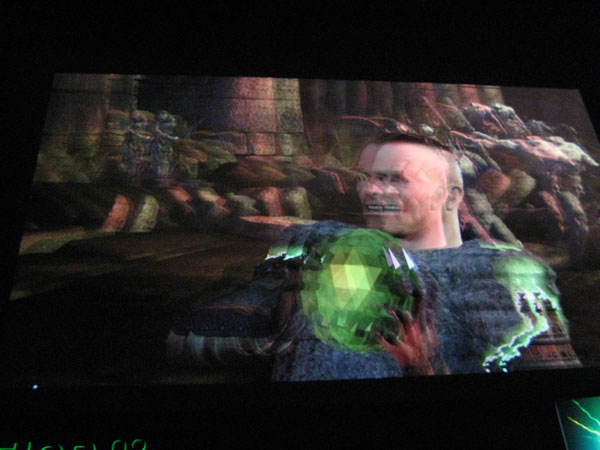 This image doesn’t just show off my poor photography skills in low light – it was a shot of the stereoscopic 3D technology from NVIDIA on their Medusa demo.  This is what you would see WITHOUT the 3D glasses on your head – a double frame image that shows both a left and right image.  The effect, even up close in the first row, was actually pretty good.  We will have more on the whole stereoscopic deal later this week. 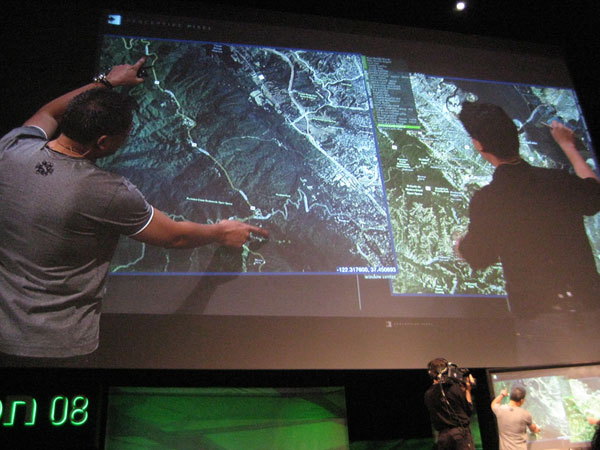 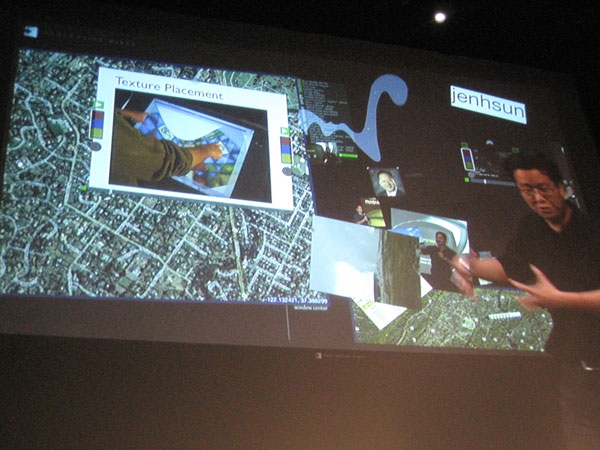 Probably the coolest demo at the keynote was from Jeff Han; he had an incredibly elaborate multi-touch interface system on display that could not only accept as many as 40+ “touches” at one time but could accommodate multiple users with ease.  Watching Jeff and Jen-Hsun both work on the system at the same time was incredibly impressive and definitely made me pine for such a user interface for all of my computing. 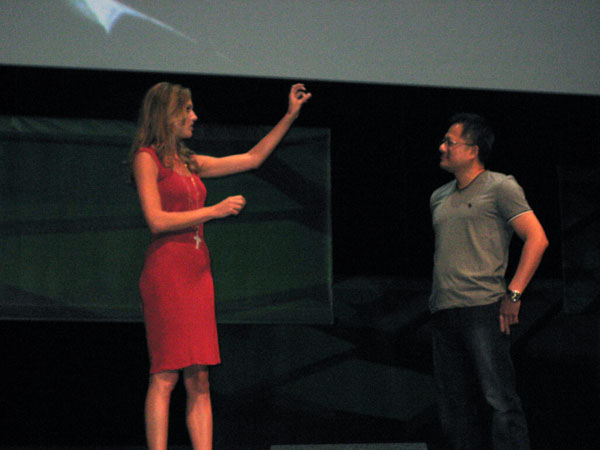 Finally, every geek’s dream, the lovely Tricia Helfer famous for Battlestar Galactica role came on stage to discuss the role that visual computing played in the creation, filming and production of the BSG series.

Next Page – Future of Rendering, Ray tracing on the GPU and TWiT’s UGM