NVIDIA is in trouble; and on many fronts. Their chipset division has had some extreme highs and lows recently and AMD’s graphics cards have quickly caught up with NVIDIA past performance advantages. The new HD 4870 X2 we previewed before is back and giving NVIDIA fits…

No, you aren’t seeing things; this is indeed our second “review” of the AMD Radeon HD 4870 X2 2GB graphics card.  The first iteration was officially coined a “preview” of the card since it didn’t have a final BIOS, final drivers and AMD asked us to limit our testing to just a handful (three) of games.  Since then we have been given more information on the card, how it differs from the HD 3870 X2 technology and were able to spend a bit longer with the product.

Let’s jump right into the action…

For those of you that didn’t read up on the initial preview of the Radeon HD 4870 X2 2GB these slides should provide a good overview of what we are getting into.  The HD 4870 X2 will be the new flagship card from AMD under the ATI Graphics brand and continues in the tradition of the Radeon HD 3870 X2 by combining a pair of current generation GPUs in permanent CrossFire mode on a single PCB.  The GPUs on this card are identical to those found on the single-GPU based HD 4870 512MB cards – if you haven’t read our detailed analysis of this technology you should check out my review of that product for a technical background. 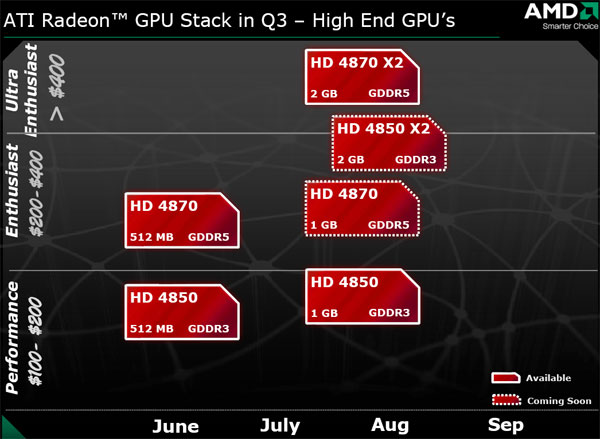 Here you can see the three different graphics parts that AMD is unveiling today.  Not only is the HD 4870 X2 being released but you will also soon see the HD 4850 X2 2GB and HD 4870 1GB cards hitting the streets in the coming weeks.  These new parts extend the AMD Radeon line up the price scale and up the performance scale as well. 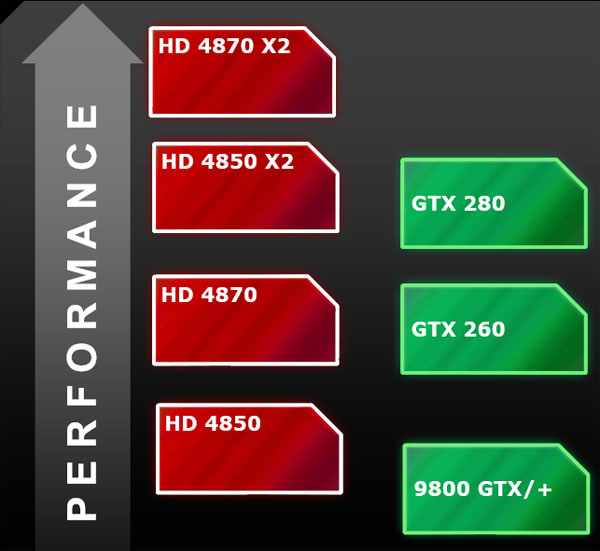 In comparison to the NVIDIA GeForce line up, AMD see their cards competing with the GTX 280 and beyond.  In fact, though we won’t be testing it here because AMD doesn’t have any ready yet, they claim the HD 4850 X2 2GB card will in fact outperform the GeForce GTX 280 leaving the HD 4870 X2 to remain as the top performer with no real competition.  We’ll test that claim today. 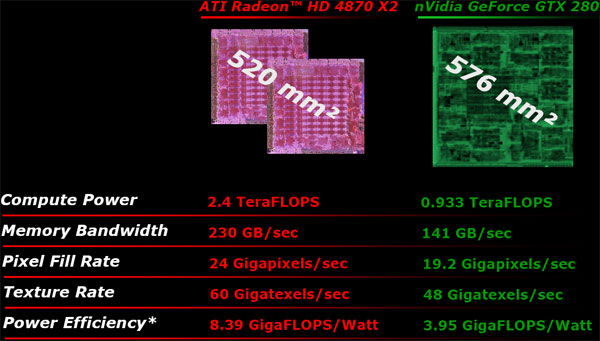 AMD was quick to compare the AMD GPU technology to that of the NVIDIA GT200 design – obviously AMD feels that their smaller GPU design philosophy is the better choice and it is that decision that is allowing them to scale a single GPU up to two with the HD 4870 X2 with success.  Some of these numbers are a bit “fudged” though – the memory bandwidth, pixel and texture rate numbers come from a single GPU doubled and will depend greatly on scaling performance in the CrossFireX software. 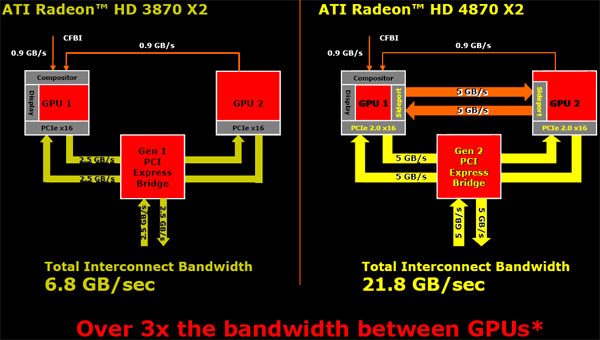 If there was one surprise during our talks with AMD about the new HD 4870 X2 2GB card it was the revelation of a new GPU-to-GPU interconnect; basically a new use for the existing “sideport” data connection used for memory access on integrated graphics chipsets.  In this implementation however the data connection is used for the GPUs to communicate without a need to go to the PCI Express 2.0 bridge chip.

What is most interesting about this technology is that though AMD told us about it, it isn’t enabled yet.  The current plan is to offer a software update for the card that will enable the technology for better performance.  The problem is that AMD is allowing board vendors an option to include the sideport technology or leave it out for a cost savings.  This means that there will be some HD 4870 X2 cards on the market that will be able to use sideport technology and some that will not – distinguishing between the two will be nearly impossible unless the card vendors explicitly indicate their card’s status.  In the end I think that this will just cause a lot of confusion and AMD should either force vendors to implement the sideport technology or leave it out all together. 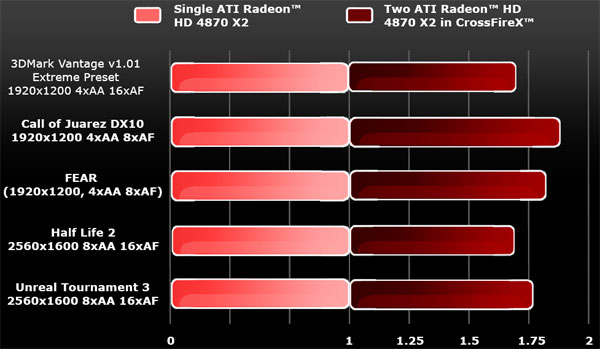 One thing we’ll test in our benchmark section is the world of CrossFire X and how a PAIR of these Radeon HD 4870 X2 2GB cards performs with four GPUs.  AMD showed this slide with good scaling as high as 1.8x in games like Call of Juarez – unfortunately for them we didn’t test that game.  More on that in the performance segment!