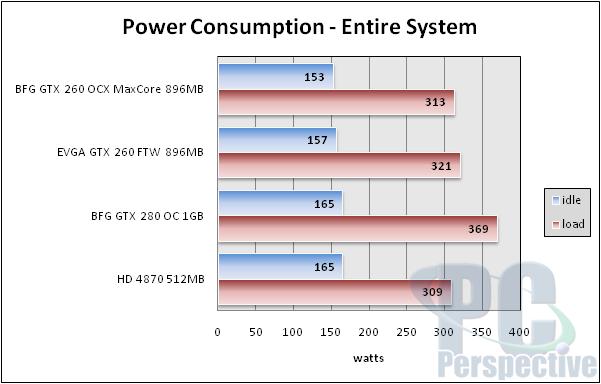 The power consumption on the new BFG GeForce GTX 260 OCX MAXCORE is actually just a few watts below that of the EVGA card using the original design – nothing major here but it is nice to see the additional 24 shaders didn’t push the GPU past some power walls into the world of the GTX 280.  Considering in some tests the GTX 260-216 and the GTX 280 are equal in performance the lower power consumption of the GTX 260-216 is sort of a coup of its own.

While I cannot say I was blown away by the performance of the new GeForce GTX 260 GPU with the increased shader core count, the gains were there, they were noticeable and the gamers (buying AFTER today) is better off with this new product on the shelves.  A 12% increase in the number of tiny processors in this graphics card model just always equals a better product – while the performance differences might vary from near 0% to as high as 10%, NVIDIA is confident that their effort in this area will earn them the coveted spot at the “price/performance” peak. 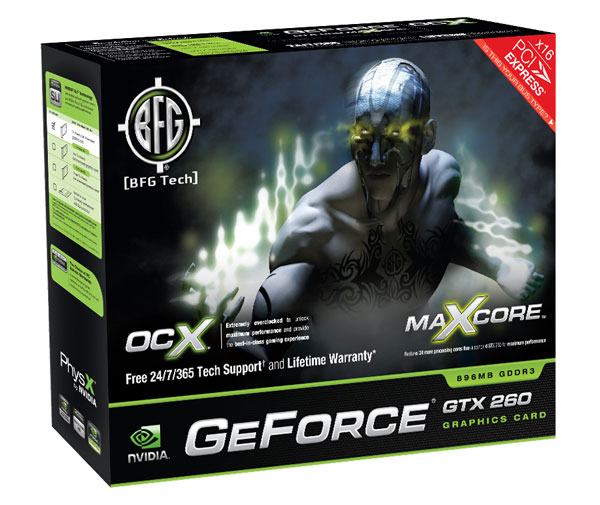 Mesmerized by the glowing eyes and lightning skin…


The games in which the additional horsepower of the GTX 260-216 were best observed were Bioshock, Call of Duty 4 and of course, Crysis.  World in Conflict didn’t see much improvement though because of its high amount of CPU dependency.  GRID saw modest gains but nothing too spectacular when looked at in the world of percentages.  Compared to the BFG GTX 280 OC 1GB card, the GTX 260 OCX MAXCORE is actually very strong competition – I’ll be curious to see how the prices match up as I wager the GTX 260 card will be the better overall value.

Where it really counts, NVIDIA is able to assert their technology over AMD’s feared Radeon HD 4870 512MB card – only in Bioshock and GRID did the AMD card continue to pull ahead.   I should note though that the Radeon card is still not that far behind and it will really come down to the pricing of these cards to determine the overall winner in our opinion.

We should note that there are a couple of bonuses you get with the GTX 260, and all NVIDIA GTX 200 series GPUs.  NVIDIA has made it a point to push their PhysX technology and their CUDA-enabled applications like Badaboom that allows for GPU-based video transcoding at an enormous performance gain over traditional CPU transcoding.  You can see our take on NVIDIA’s move away from “just” a GPU in this article.

Where does this put the new GTX 260-216 in the world of performance graphics cards?  It is obviously a better deal than the GTX 280 card as the GTX 260-216 is nearly on par with it in terms of performance, uses less power and keeps nearly $100 in your wallet.  It is not so clear cut with the original GTX 260 and Radeon HD 4870 cards though since both are significantly cheaper than the BFG card we tested (24% cheaper in AMD’s case – $329 versus $265) and it doesn’t offer quite that much performance advantage when looking at the raw numbers. I know that AMD is going to soon be pushing a new 1GB revision of the HD 4870 as well that should put even more pressure back on the NVIDIA GTX 260-216 part.

NVIDIA’s newly revised GeForce GTX 260 GPU puts another coal in the fire that is the performance graphics card market.  The new card is impressive but isn’t able to topple the AMD Radeon HD 4870 512MB from the summit completely simply because of the large price gap that still exists between it and the new 216 shader GTX 260s.  If you can find one of these highly overclocked models, like BFG’s OCX MAXCORE model we tested here today, for under $300 it’s a keeper for sure – you’ll have performance to rival the GTX 280 and pricing to rival the HD 4870 and we can’t ask for any more than that.