TGDaily is reporting that Intel’s hexa-core Dunnington CPU (for those of you in the dark, that means 6 cores) for the server/workstation market could be launched as early as next week.  This wouldn’t be surprising at all considering we first heard about Dunnington in March during the IDF in Shanghai.  Don’t expect to see these cores in the consumer level products though – your next update will be with Nehalem-based Core i7 in the coming months. 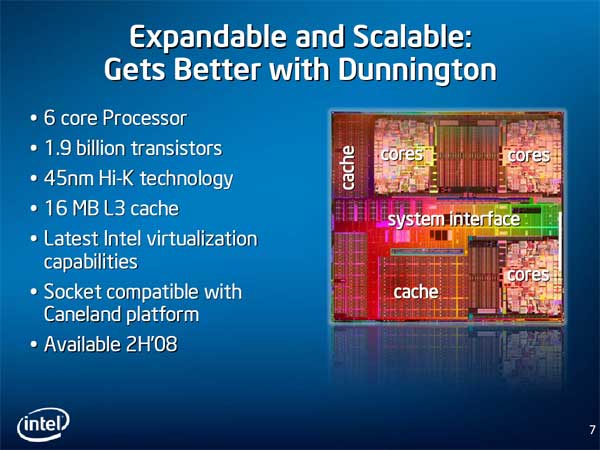 Santa Clara (CA) – Intel’s six-core ‘Dunnington’ processor could be released next week’s at the VMWorld conference in Las Vegas.  The chip, officially known as the Xeon 7400, is manufactured on the 45 nm process and will be the last chip in the Penryn line.  The six cores share 16 MB of L3 cache and each pair of cores will share 3 MB of L2 cache (9 MB total).  Intel promises that chip will have a TDP rating of approximately 130 watts.

The Dunnington, like other future Intel processors, will have all the cores in a single piece of silicon.  This is in contrast to the current generation of processors which are multiple cores fashioned into one package.  While some detractors say this technology is less elegant than AMD’s monolithic processors, it has allowed Intel to get to market faster.  In the end most consumers probably don’t care how the chip is made; they just want something that works.