The overall efficiency of a power supply is very important, especially when the power supply is intended for fan-less operation.  The less waste heat generated the better!  Efficiency is defined by the power output divided by the power input and is usually expressed as a percentage.  If a PSU were a 100% efficient (which none are) 400 watts of AC power going in would result in 400 watts of DC power coming out (with no waste heat to dissipate).  In the real world there are always inefficiencies and power is lost in the form of heat during the conversion process.

I measured the AC power input to the SilverStone ST45NF PSU with the Extech power analyzer while the total DC load was found by adding all the individual +3.3V, +5V, +12V, -12V and +5VSB loads together.

The overall efficiency of the SST-ST45NF fan-less power supply is excellent and appears to peak out around 250W, which is roughly 55% of the rated output capacity.  Having good efficiency in a fan-less PSU is especially important as the less waste heat to get rid of the better! 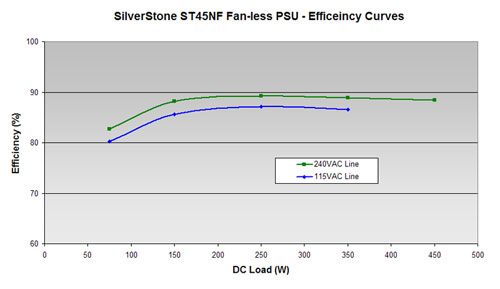 
Note that efficiency will almost always be higher at the 240 VAC line voltage versus 115 VAC (as the voltage goes up the current goes down, and since line/component loses are proportional to current, less current means lower loses).  And yes, the SST-ST45NF fan-less power supply is 80-Plus certified.

Because the SilverStone ST45NF is a rather unique fan-less power supply we had to forgo our normal differential temperature testing.  We would normally mount the power supply under test inside a modified mid-tower enclosure and recirculate some of the warm exhaust air back into the case, which allows the internal case air temperature to increase with load, just like it would in a real PC.  However, since the ST45NF doesn’t generate any measurable airflow on its own we tested the unit in an open air environment.  The problem with testing this power supply inside a case is that all cases are different and each end user may configure their case differently with various fans and components.  So the results I would obtain with one case configuration would be entirely different from what another user might experience.

Two thermocouples were attached to the finned bottom plate to monitor temperatures (located over the areas where the primary and secondary heatsinks make contact from inside). The ambient room air temperature was 23ºC (74ºF) +/- 0.5ºC during testing.

Keep in mind these are the outside surface temperatures of the power supply.  The internal component temperatures have to be even higher.  However, at no time did the Temp LED ever turn amber, even while operating under a 450W maximum load.

Because the ST45NF is fan-less, the noise emissions are essentially zero (not 0 dBA). 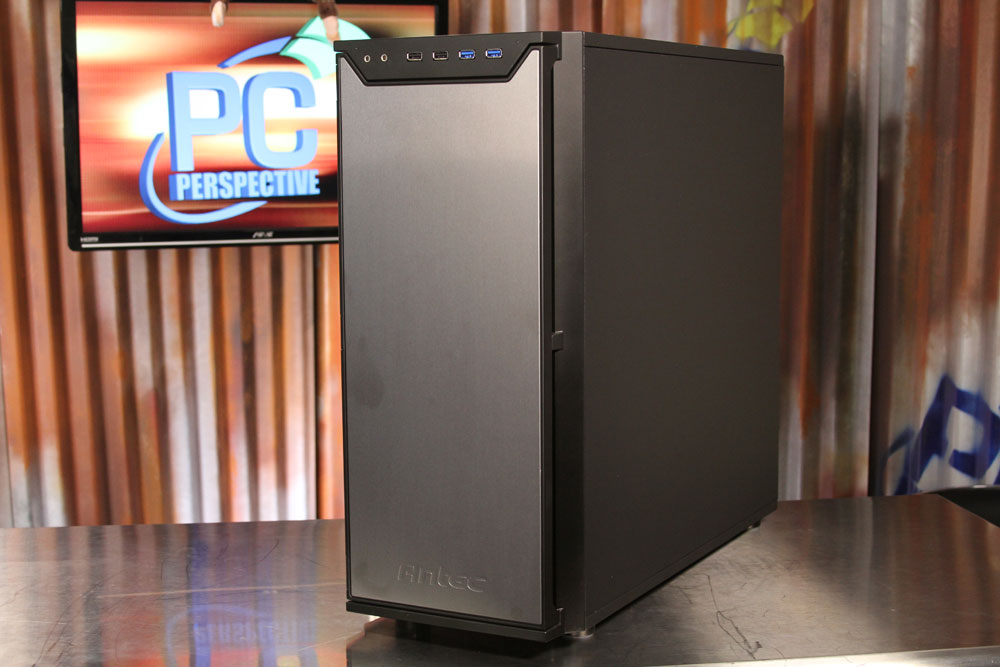 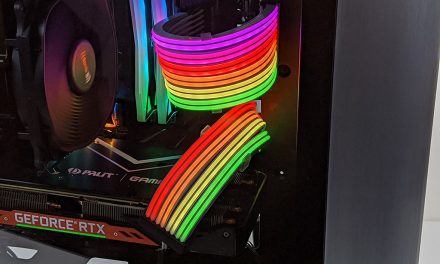 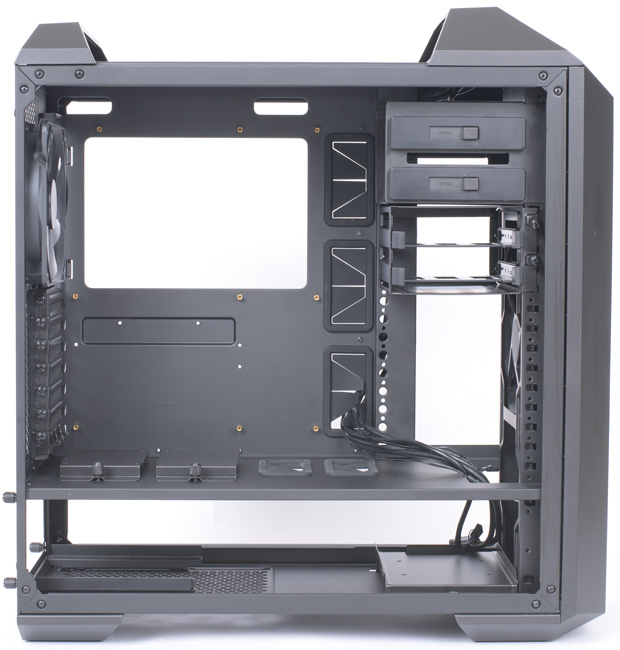 Making the most of the MasterCase 5