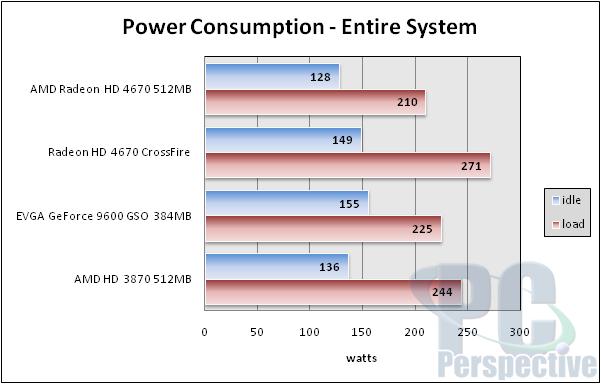 The power consumption numbers on the Radeon HD 4670 512MB card are quite impressive pulling just 128 watts (total, for our test system) compared to the NVIDIA GeForce 9600 GSO’s 155 watts.  At load the two cards are separated by about 15 watts – not much in the grand scheme of things but it is a difference of just over 7%.  Taking into consideration that the HD 4670 was also a better performer in our gaming tests, that gives AMD’s RV730 GPU a very impressive performance per watt rating in comparison to NVIDIA.  We can also see that by adding in a second HD 4670 GPU we only pushed the system power consumption up 61 additional watts, giving us an estimate on how much power the GPU pulls on its own.

If we look at the Radeon HD 4670 in its own circle, in comparison to other sub-$100 GPUs (sometimes even lower than $90), the performance we are seeing in some of today’s most stressful games is more than impressive.  Obviously if we compared this new GPU to the likes of the HD 4870 X2 or even the single HD 4870 is would be easily out classed; that of course isn’t a fair comparison but I would guess for most consumers there is that “if I could only spend X dollars more…” mentality to PC building.  If you could spend $150 rather than $90, would you GPU choice change?  $250 rather than $90?  Surely, but for those users that have a hard lock on budget, or those that simply don’t need to impressive their friends in neighbors with the latest gaming PC, cards selling for $100 today are looking mighty intriguing.

The GeForce 9600 GSO from NVIDIA is really one in a series of patch job solutions the company has come up with to counter AMD’s continued march through the GPU markets in 2008.  When the Radeon HD 4870 and 4850 were released NVIDIA responded by dropping prices dramatically on existing parts; when the 4870 X2 showed its face the GTX 280 dropped like a stone; the GTX 260 has magically gone from 192 shaders to 216 shaders to stay competitive.  And now that the AMD low-end cards are hitting the market, HD 4600-series and even the HD 4500-series, NVIDA struggles by dropping prices on the currently family of GPUs on the shelves.  Is it working to keep them competitive?  Yep, but it’s not exactly doing it with style. 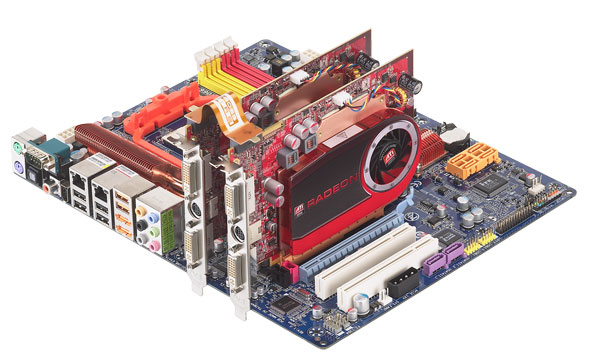 The Radeon HD 4670 looks even better when we take that long-debated question of multi-GPU tactics into account.  We saw scaling that reached into the 80% and above range with our pair of HD 4670s – something that is possible only because the GPU is most definitely the bottleneck in our gaming tests.  The upgrade potential 3-6 months down the road for a user buying one of these GPUs today is compelling – $90 (and probably lower than that in the future) is a much easier cost to swallow for a sweet increase in gaming performance.

One area we haven’t focused on for some time with our GPUs (but we are going to be addressing with future budget graphics card articles) is how they fit in the HTPC scheme.  AMD’s cards have really carved the way for this in the past couple of years as they were the first to introduce features like HDMI output and audio codec support across their entire line of GPUs.  The HD 4670 of course supports the DVI-to-HDMI adapters that are likely included with every retail package and it also has the integrated audio processor on-board for seamless streaming 7.1 ACM audio out the HDMI connection for a single cable HTPC output.

As with all current HD 4800-series cards, the HD 4670 supports both ATI’s UVD engine and the UVD 2 engine for supporting dual stream outputs from Blu-ray discs supporting just that.  AMD’s cards decode all steps of HD video including VC-1 and H.264 formats for incredibly efficient playback that doesn’t over utilize your CPU.

With budget cards like this it is hard to talk and debate about them without mentioning the prices throughout the article.  As we have discussed, the AMD Radeon HD 4670 cards are selling for well under $100 – our pricing engine only list a couple of cards as of today: an MSI selling for $89 and an HIS card selling for $99.  Newegg has a few more, the most compelling of which is a Sapphire branded model selling for $86 without a rebate attached to it.

The GeForce 9600 GSO is much easier to find as I write this, simply because it has been on the market for a much longer period.  Models similar to the one we tested can be found for as low as $92 on our pricing engine.  Some have mail-in rebates that are bringing the prices down to the $75 level which is actually pretty impressive.

The AMD Radeon HD 4670 512MB card is nothing less than one of the best values in budget graphics in years.  For under $90 you can game with today’s top titles, build a sweet home theater PC and leave yourself open for a nice upgrade months down the line with an impressive CrossFire scaling.  Gamers that are looking to push resolutions of 1920×1200 or beyond will likely need to upgrade their budget and move up the line of graphics card performance but I have a good suspicion that most casual PC gamers will find themselves impressed by the HD 4670.