Turns out the answer is yes. The new AMD Radeon HD 4830 512MB graphics card competes with NVIDIA’s GeForce 9800 GT and is actually a better overall choice in my opinion. Budget and mid-range cards are getting a BIG boost in validity this fall and it doesn’t seem to be slowing down yet.

I find it is becoming increasingly difficult to write interesting and witty introductions for mid-range graphics card reviews – we just seem to have had so many of them in recent months that data bank that is my writing ability needs some replenishment.  Suffice it to say that today we have YET ANOTHER mid-range graphics card on the table for review and for your approval.  The new Radeon HD 4830 512MB card falls into a price gap that AMD has yet to address with a new RV770-based product and as you might expect, shares a lot in common with the rest of the HD 4800-series of cards.

Read on to see what the new offering can offer.

Just a few short weeks ago we brought you the AMD Radeon HD 4670 card that offered terrific performance at a sub-$100 price point.  Until today, the next best card was the AMD Radeon HD 4850 that goes for something around $150 and up. 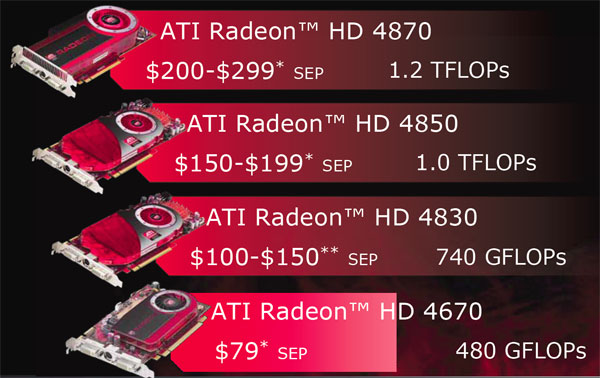 Just so we have another GPU SKU to keep track of, AMD decided to release a new product in the 4800 family that would compete in the $100-150 price point against one of NVIDIA’s key products, the GeForce 9800 GT.  This diagram clearly shows how AMD lineup looks from $80 to $300 and the technology here is actually quite impressive.

The quick and dirty of the new HD 4830 is as seen above: 512MB of GDDR3 memory, a single slot cooler design, 110 watt TDP that requires a single PCIe 6-pin power connection. 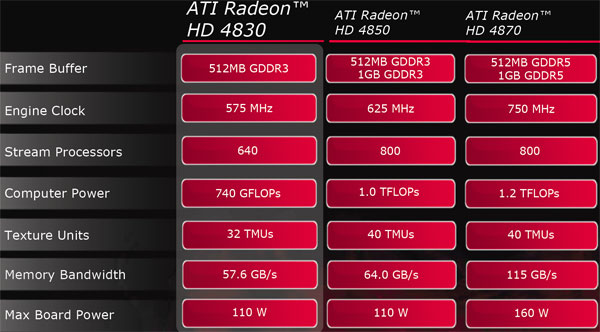 Overall the specs are impressive, but no overly so, as you would expect to see in a sub-$150 graphics card.