Not all heatsinks are created the same

While just about any DIMM you buy today has a heat spreader on it at the very least, not all of the cooling solutions offered by memory makers are as good as others.  If you do find yourself having heat problems with your RAM, try the Thermaltake RamOrb memory cooler.  The only major difficulty that you could encounter is the removal of the original heatsinks so that you can use the RamOrb, other than that it should be as easy as it was for TweakTown.

“Times have certainly changed and even budget memory comes with a heatsink these days. Memory now runs much warmer than the ambient air surrounding it and companies are spending a great deal of time and effort to cool their products. While early coolers were held in place with what amounted to double sided tape from 3M and the coolers were more for appearance than performance, a few companies have invested in thermal transfer material to effectively transfer heat away from the RAM and pass it to the cooler.

Thermaltake is now taking the idea of the cooling RAM to a new level and incorporating one of their most popular product lines. The new Thermaltake RamOrb (PN: CL-R0029) is now shipping to retail and e-tail locations and will be available in the coming weeks.”

The continuing saga of DDR2 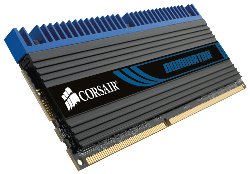