Ah yes, the eternal testing of video standards that may or may not exist in a couple of years.  Remember all that HD-DVD testing we had done in the past?  All useless now.  Instead we have a new series of Blu-ray tests used to compare the video decode process and CPU off-loading capability of GPUs and chipsets using high bit-rate movies and eve some new dual-stream output Blu-ray discs.

For our testing we used a copy of “Ironman” on Blu-ray that often has bit-rates higher than 40 Mb/s in our selected scene.  We tested for 4 minutes and judge CPU utilization with the integrated Vista Performance Monitor application.

I also decided to test the newly added Blu-ray feature of dual-stream video included in the BD-Live feature set.  For that we used a chapter in the “Transformers” Blu-ray, also run for 4 minutes and monitored with the Performance Monitor app.

Our playback software was PowerDVD 8 Ultra Edition (version 2021) that fully supports all GPUs for decode acceleration.  One caveat to all of this – apparently we can no longer DISABLE hardware decode acceleration in software due to constraints of HDCP and copy protection.  Isn’t HDCP grand? 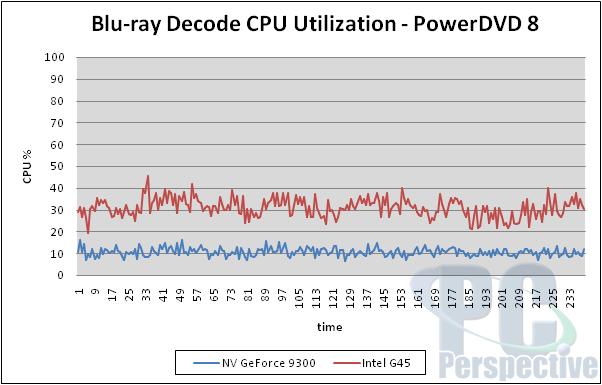 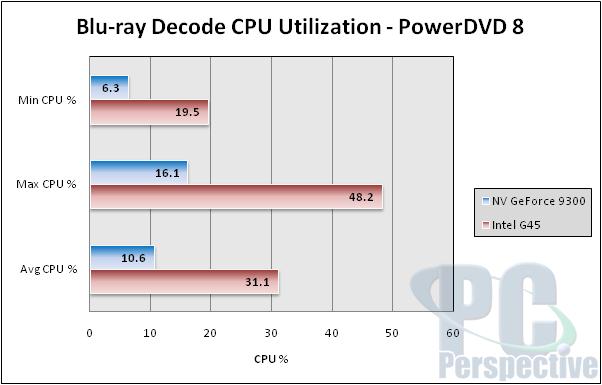 You can see in these first performance graphs that the hardware decode acceleration on the Intel G45 chipset doesn’t seem to be working properly in a software title that is publicly available for purchase today.  The difference between the functionality of a system running at 31% utilization and one running at 10% utilization is obviously a dramatic one and if you plan on multitasking on this platform the NVIDIA GeForce 9300 is the obvious leader. 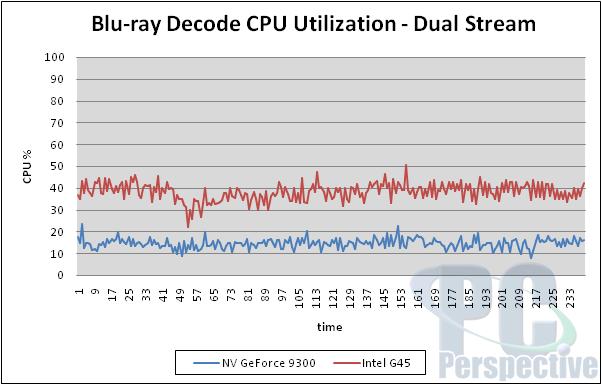 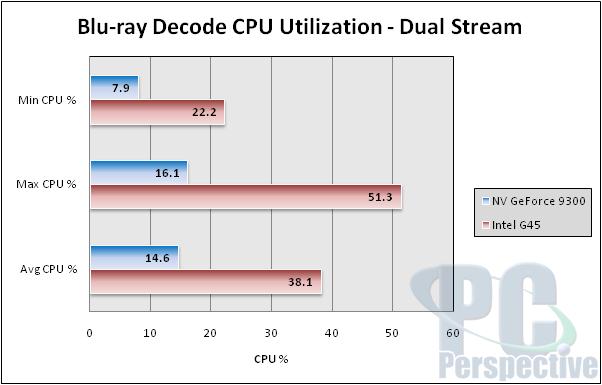 The dual stream performance is both more exciting for NVIDIA’s chipsets and more depressing for Intel’s.  Average CPU utilization goes up only 4% with the NVIDIA GeForce 9300 chipset but goes up 7% to 38% on the Intel G45 motherboard.  Obviously the additional decode work being put on the GPU and CPU is forcing the Intel X4500 graphics core to struggle to stay above water.

Both systems produced good looking video however and there was no stutter or frame drop on EITHER platform.  If you start adding in other background applications and that CPU utilization goes up 30-40%, then your choice of the NVIDIA GeForce 9300 over the Intel G45 will make for a much better computing experience.