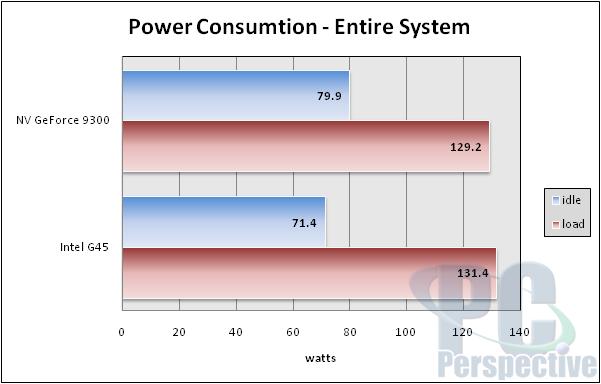 Here is something that is rather surprising – the two chipsets are actually quite competitive from a power consumption stand point.  I had expected the GF9300 to use considerably more power than the Intel G45 chipset due to its increased graphics performance and incredibly hot heatsink temperatures but apparently that isn’t the case.  At idle though, the G45 motherboard is able to run on less power – nearly 12% lower in fact.

There are clearly two very different aspects of the GeForce 9400/9300 chipset when it comes to performance comparisons to Intel’s own G45 chipset.  First we have to look at the platform performance overall – CPU, memory, storage, etc.  In most respects the NVIDIA GeForce 9300 motherboards we have in house were very strong competitors to an Intel product line that has been refined and nearly perfected over the decades.  The combination of the G45 north bridge and ICH10 south bridge is a tough foe to take on but NVIDIA has done so with their first high quality IGP Intel-platform chipset to date.  The SATA performance of the NVIDIA chipset bested the Intel platform as did its USB performance.  Power consumption was on par, even with better graphics performance, and in nearly all applications tests the NVIDIA chipset won or tied overall.

The lone exception was the memory scores we saw in SiSoft Sandra 2009 – there was a noticeable gap between the NVIDIA memory controller and the Intel G45 memory controller that manifested itself in a couple of benchmarks including PCMark Vantage.  NVIDIA claims this will be updated in a future driver release (note this is not a BIOS release…) but we are hesitant to give anything away until we have that in our hands.

Where the NVIDIA GeForce 9300 chipset really stood out was in the gaming and graphics tests.  In our series of benchmarks: 3DMark Vantage, Crysis and World in Conflict, the Intel GMA X4500 never even came close to competing with the obvious graphical dominance of the NVIDIA integrated graphics core.  Enthusiasts won’t be satiated by the performance of the chipset by any means, but very casual gamers will have a much, much better experience using an NVIDIA IGP solution over an Intel one.

As with most NVIDIA products, the feature list is long on the GeForce 9300 and 9400 chipset family.  With support for DDR2 and DDR3 memory, all CPUs using the 1333 MHz or slower FSB and full PCI Express 2.0 expansion slots, the NVIDIA option has all the base level boxes checked when compared to the Intel G45. 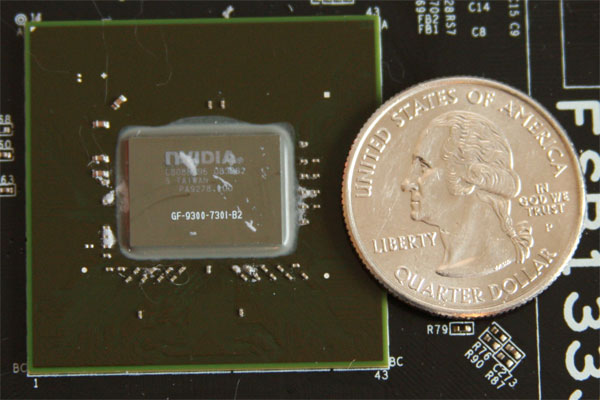 The GeForce 9300 die – all those features in one tiny chip

Somewhat telling by the fact that I have three retail motherboards of the GeForce 9300 chipset in our lab already, availability of motherboard based on these chipsets should be next week, if they aren’t for sale already.  What might be a little confusing is the lack of any GF 9400 based motherboards in our test today – apparently only Gigabyte has one ready for launch.  This tells me that GF9300-based boards are likely to be much more common in the market.

For pricing, the NVIDIA chipset motherboards need to be competitive with the likes of Intel retail G45 motherboards – there is definitely no shortage of available models in our pricing engine.  You can find some motherboards based on the G45 for as little as $110 and as much as $170 depending on the features you really want.  The ASUS P5N7A-VM motherboard should be available for $129 and the MSI P7NGM-Digital will be priced at $110.  Unfortunately for Intel, they do not have any kind of price advantage to make up for the huge gains NVIDIA sees in graphics performance and features; thus NVIDIA will likely take the crown for Intel IGP solutions going forward.

NVIDIA’s new GeForce 9400 and 9300 chipsets are a breath of fresh air in a world of integrated Intel platforms that have underperformed.  With the exceptions of synthetic memory performance and some nagging issues with the tested motherboards BIOS, the GF9300 chipset was a success from every angle.  The graphics performance is without a doubt a level of magnitude improvement over the G45 chipset and added benefits like CUDA, Hybrid SLI and the coming onslaught of multimedia applications accelerated by GPUs make motherboards based on the NVIDIA GeForce 9400/9300 chipsets an easy choice.