NVIDIA gave media a preview of all the features coming in the new 180.xx driver set known internally as ‘Big Bang II’ and we have all the information for you here today. Even better, you can get a very early beta of these drivers if you are picking up Far Cry 2 as well!

With the release of Far Cry 2 today, NVIDIA posted a new beta driver (Vista x64 linked) with the designation of 180.42.  You might have heard a bit about something called the “Big Bang II” driver in recent weeks that indicated that release 180 of the NVIDIA GeForce drivers would be introducing some new and interesting features.  Well with 180 sort of in the wild, what is the truth?

NVIDIA spent some time on Monday with us discussing the new driver version, what is available today and what will be available with the full, WHQL release in the coming weeks. 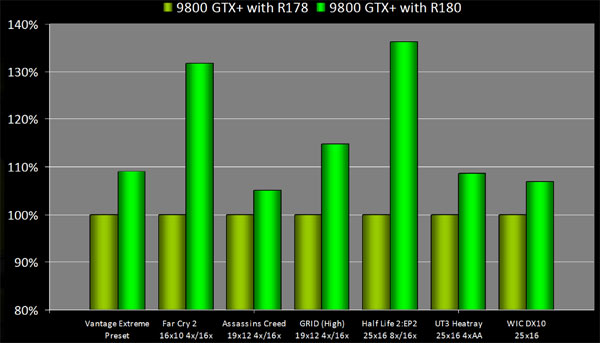 First in the release is a general increase in gaming performance for single GPUs – the example shown above compared the G92b-based GeForce 9800 GTX+ and accompanied performance boosts going from 178.xx to 180.xx drivers.  Though the scale NVIDIA uses is a bit deceptive, clearly there are some major improvements especially on Far Cry 2 and Half-Life 2: Episode 2. 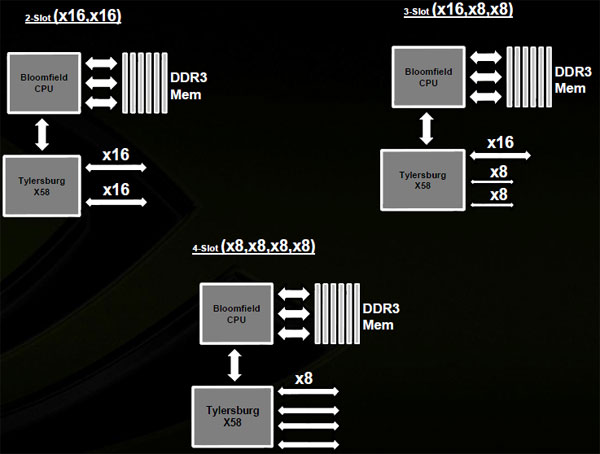 The R180 drivers are the first to enable SLI support on non-NVIDIA nForce motherboards; this is a feature we discussed in length when it was first announced at NVIDIA’s NVISION08 conference.  SLI will be supported on approved and licensed Intel X58 chipset motherboard for the upcoming launch of Intel’s Nehalem Core i7 processors next month.  This diagram shows the available configurations for 2-way, 3-way and even 4-way SLI.  (Note that 4-way SLI really is for 3-way SLI + a GPU for PhysX.) 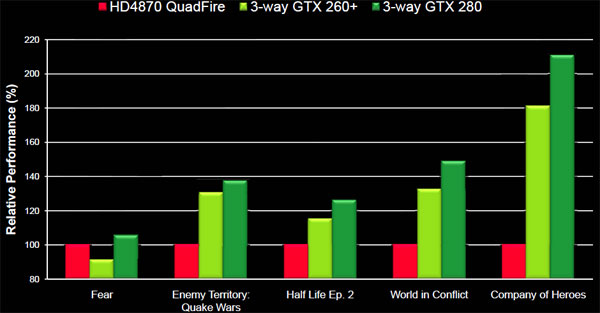 Another focal point of NVIDIA’s driver team was to attempt to take back the overall performance crown that AMD landed on with the Radeon HD 4870 X2 and Quad CrossFire configurations.  NVIDIA claims that they have done so with the 180.xx drivers and 3-way SLI configurations using both the GTX 260+ (which NVIDIA puts at price parity with a couple of HD 4870 X2s) and the GTX 280.  While NVIDIA would likely be telling the truth on this slide above it is but a small subset of the games available and in fact only uses ONE of the titles we use for testing.  And I am surprised to see Far Cry 2 is not listed here.

Perhaps the most exciting news about the release 180 ‘Big Bang II’ drivers is the introduction of multi-monitor support for SLI configured PCs.  It should be noted that this is something that AMD has offered now for many months and NVIDIA is really just catching up at this point and there are still some limitations I am not happy with on the software side.

In the diagram above you can view the different ways in which multiple monitors can be configured on an SLI system.  Two monitors can be connected to either a 2-way or 3-way SLI system by plugging both of them into the same graphics card – and in fact this is a requirement.  That means that even if you have four unused DVI connections on two other cards (for a 3-way SLI system) you still can’t use them.  If you want to access more than two monitors, you can add in a 3rd GPU and connect a pair of displays up to it.  But again there is a catch – it cannot be the same graphics card model as the one used in the SLI configuration.  If you have two 9800 GTX+ cards in SLI you can’t decide to use a third for additional displays rather than 3-way SLI as the software isn’t able to handle it. 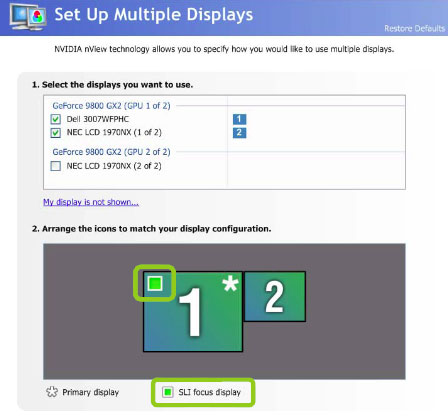 With the addition of multi-monitor support comes a new panel in the driver that allows you to configure which displays you want to enable and also which display should be the “focus” display – the primary.

What can you do with multi-monitor SLI configurations?  For one, if the game supports it, you can enable multiple displays in the game menus to enable a better game experience, like this one seen above from Supreme Commander.  Keep in mind this is “if the game supports it” as NVIDIA will not be forcing the issue by including false timings to trick games into think you have a 3200×1200 monitor, for example.  In reality there are only a handful of titles that support this feature: World in Conflict and Flight Sim X are the only other two I know of.

What might be more interesting is the ability to play games in a window and then be able to full access your other monitor and applications seamlessly.  You could be checking email, chatting or browsing the web while your WoW character is leveling up.  As for full screen gaming and using that second monitor, that’s a tossup: NVIDIA said that they can’t really predict what games will actually do when full screen 3D mode is turned on and thus they cannot say they’ll support it – in my experience a full screen 3D title on one monitor simply means the other one goes blank or when it gets focus, your game will enter windowed mode.

Also of note: NVIDIA did admit that SLI performance will be slightly degraded when you are in windowed gaming mode – something we will definitely be looking at when the full driver release is ready.

Also new to the 180.xx release drivers will be support for multi-card PhysX installations.  Basically, this means that you will finally be able to do what we had WANTED you to be able to do from day one: use your older PhysX-compatible GPU for PhysX acceleration while saving your newer, faster GPU for graphics.

There will be a new PhysX configuration tab in the driver where you can manually set which GPU should handle the PhysX processing. Pretty straight forward stuff.

Today’s release of the early beta of the release 180.xx drivers really is a beta product – NVIDIA was only pushed to make the driver available so soon because of the release of Far Cry 2.  The new 180.42 driver should be the driver you install if you are planning on pick the game up today but don’t expect all of the other features mentioned in this article to be officially ready for consumer consumption until the middle of next month.

Overall, I am impressed with the new features that NVIDIA has added but still find myself wanting in regards to multi-monitor support.  As a person who is permanently attached to having more than one display, the need for more robust and friendly options is must.  For me, as a user of three monitors, I still don’t find SLI to be a viable option as it requires a third graphics card outside the SLI window and is really a pain.  If two monitors is your bag, you will likely find the ‘Big Bang II’ release to be the answer to your multiple monitor woes.

As for the rest of the bullet points (PhysX config, X58 SLI support, better performance) we expect to be able to fully test them in the coming weeks!