The first thing I noticed about the ASUS Rampage II Extreme motherboard is that it is longer than most standard ATX form factor motherboards – and it needs to be in order to hold on the stuff included on it! 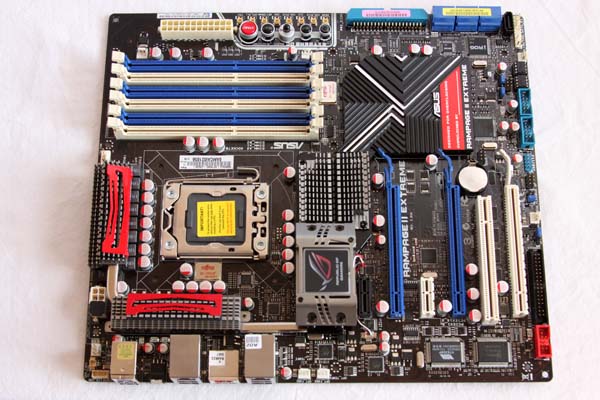 Most of the standard components on the board appear to be pretty normal – CPU socket, chipset heatpipe cooling, PCI Express 2.0 expansions slots, etc.  There a group of buttons along the top of this photo (to the right of the DIMM slots normally) that stands out as being abnormal though. 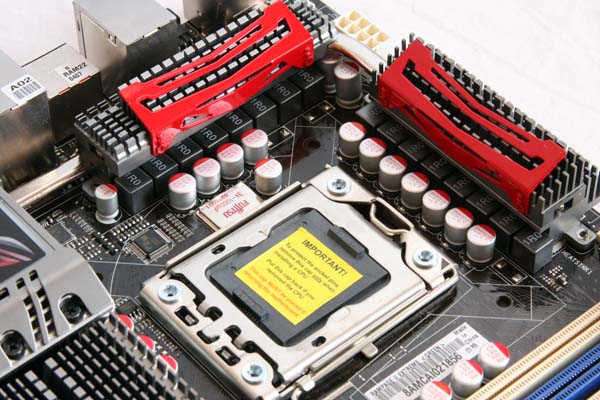 The LGA1366 socket for the Intel Core i7 processor has a good amount of room around it for proper cooling and you can clearly see the 16-phase power distribution that the Rampage II Extreme supplies for the CPU. 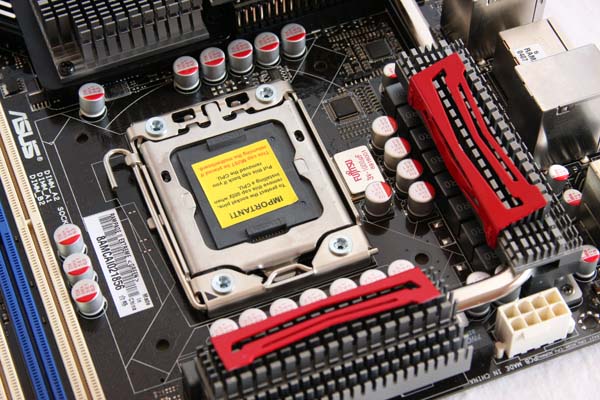 The capacitors surrounding the processor are high quality Japanese-made devices and are low profile enough to not interfere with any kind of cooling we have run into thus far for the Core i7 CPU.  You can also see the 8-pin ATX Aux power connection here huddled closely to the heatpipe which causes a bit of an issue when trying to your thumb behind the connector for removal.  That shouldn’t be normal occurrence though so it isn’t a bit design drawback. 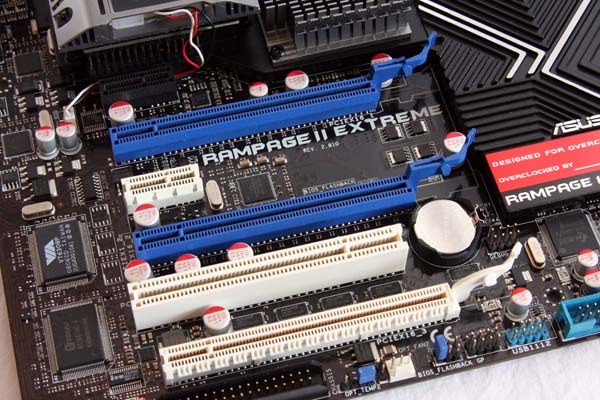 Starting the expansion slot configuration can see that the ASUS Rampage II Extreme offers up just about all the options a hardcore enthusiast could need.  First and foremost, there are three full sized PCIe 2.0 x16 graphics slots that will allow you to support 3-Way SLI (as well as 2-Way of course) and CrossFire X with up to three cards.  The R2E (shorter than typing Rampage II Extreme out over and over) is the first board to support both 3-Way SLI technology from NVIDIA and CrossFireX technology from AMD – the only piece missing is to support all four cards capable of running with AMD’s solutions.

Other than those three PEG slots, which are of course backwards compatible with other small connector based PCI Express peripherals, there are two PCIe x1 connections and a legacy PCI slot. 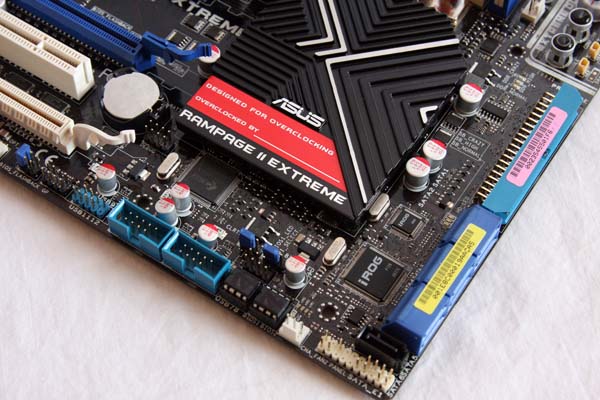 Moving over to the right side of the board we can see the area that contains the south bridge ICH10R chip (under the black/red heatsink there) and the various I/O connections the motherboard supports.  There is a conspicuously labeled chip here called the “IROG” which is supposed to let you have more control in monitoring and change hardware settings on the fly.  It is this that allows the included POST LCD to interact with the BIOS directly as we will see in the coming pages.

Also of interest is the two small black chips located to the right of the aqua-colored USB headers – these are both BIOS chips for motherboard – yes two of them.  They allow the user to backup their settings or have two completely separate BIOS’ and the iROG chip gives you the ability to switch between which one to boot very easily. 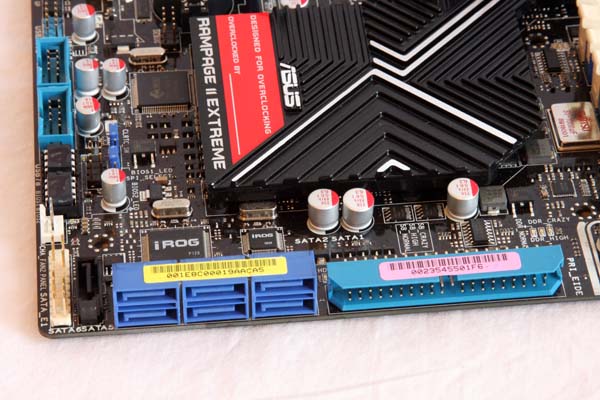 All six of the ICH10R supplied SATA channels are outward facing – meaning you will not have any complications from SATA cables and graphics cards even if you are using three huge NVIDIA cards in a 3-Way SLI system.  The long black SATA connector is coming from the on-board JMicron controller that also supplies the eSATA connection and the IDE channel we see here as well. 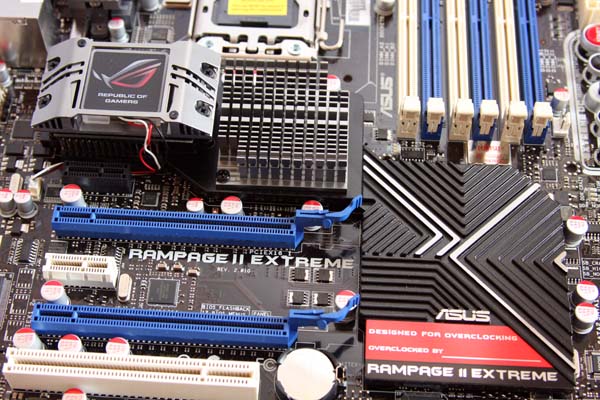 The chipset cooling is fairly robust, though still completely passive using ASUS’ well established heatpipe cooling technology.  Both the north bridge and south bridge have large heatsinks on them and there is actually a lighted portion seen here with the ASUS Republic of Gamers logo.  Under it lays a mysterious thing called the ASUS “VTT CPU Power Card.” 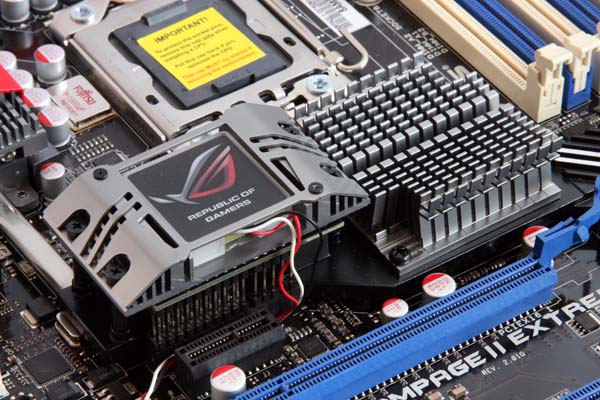 The chipset cooler is well designed and cool to look at when lit. 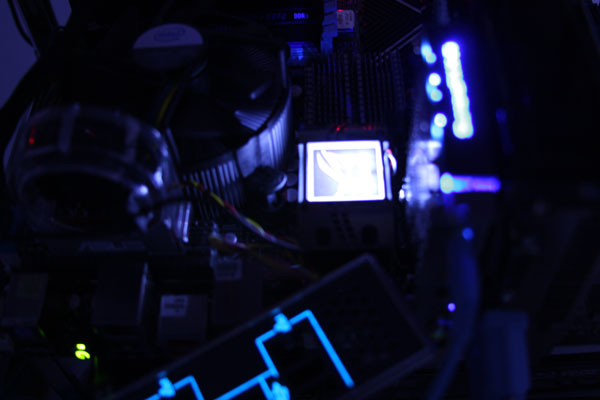 Not a very good image here but you get the idea – the north bridge cooler definitely has a soft white, waxing and waning glow to it while the system is turned off.  The light is on solid when powered up. 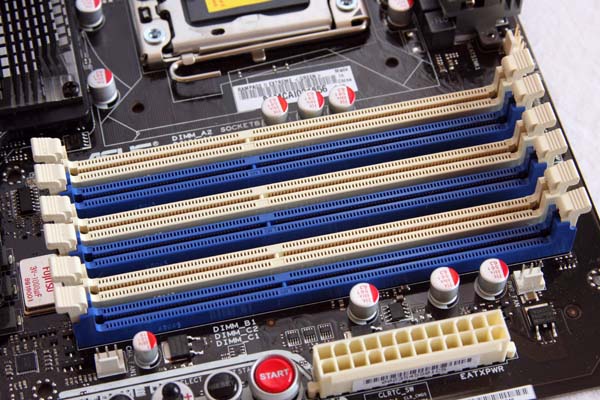 There are six DIMM slots supporting DDR3 memory modules up to 1800 MHz according to ASUS’ own literature.  Of course, the Core i7 CPUs only officially support DDR3-1066 speeds but overclocking has really become the norm now.  The primary ATX power connector is located here, well out of the way of other components it might interfere with.  Also, keep in mind if you are installing on this board that the BLUE slots are the primary slots for each channel – fill them first.  Otherwise you will be left smacking your forehead when your system won’t post!