NVIDIA isn’t the only game in town

NVIDIA and the CUDA programming model have been getting all the attention for GPGPU computing recently but AMD wants to fight back with news of its update to the ATI Stream programming model that will include a completely free transcoding application in December.

Before today’s incredibly in-depth and important analyst day AMD spent some time with us talking about its current and future plans for the Fusion initiative and stream computing.  Stream computing can be boiled down to the idea of using the highly parallel processors in GPUs to bring incredible performance gains to those applications that can take advantage of such technology.

While not exactly “stream computing”, 3D rendering and gaming is the first obvious example of this kind of technology but what is likely the first true consumer stream compute application was the off-loading of DVD playback and then HD playback. Here both NVIDIA and ATI found a new use for their shaders by taking parallel tasks usually assigned to the CPU and moving them to the GPU in order to offer better performance and better efficiency.

We have made a lot of progress since then with Blu-ray/H.264 decoding, Folding@Home clients and more starting what we hope will be a mass tidal wave of GPGPU programs (general purpose GPU) to hit the street.

Until today, it was really NVIDIA pounding the streets the loudest declaring the benefits of GPGPU computing with their graphics chips and CUDA program paradigm.  Well today AMD is officially unveiling its plans for stream computing in the consumer and enterprise markets. 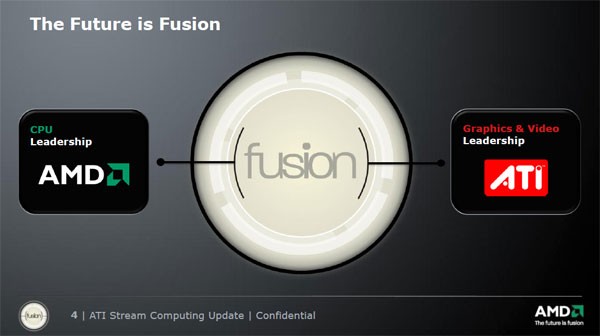 Fusion is the brand AMD has created around the idea of combining the power of a standard CPU with that of a standard GPU to create a more flexible and efficient processing environment. 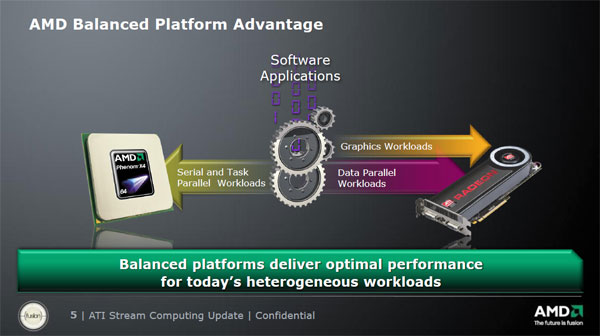 This would allow AMD processors to handle the most serial of tasks and those workloads that just cannot be properly divided in the more parallel tasks that AMD GPUs can handle so efficiently. 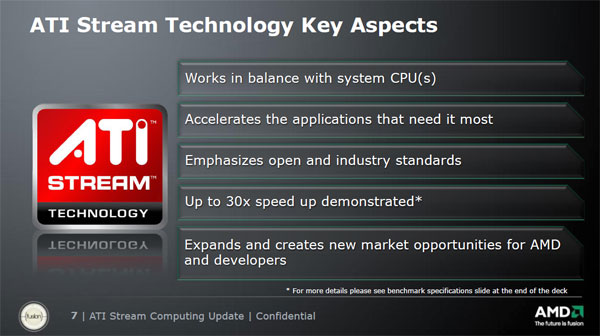 AMD’s advantage over NVIDIA in this area is that not only does the ATI brand have GPUs to use for this “balanced PC” but that the company also has the Phenom brand of CPUs to pair with them.  ATI’s stance is also one of pushing open industry standards for computing language programming while NVIDIA supports them but sees value in their own custom CUDA-based applications. 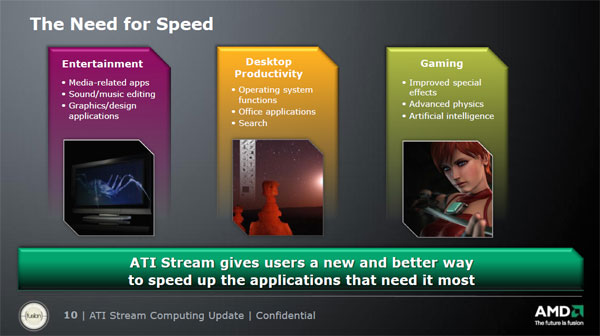 What areas could see benefits from stream computing?  For the consumer areas of entertainment, productivity and gaming all can benefit from the power of the GPU in things like media applications, graphics design, search, physics and AI. 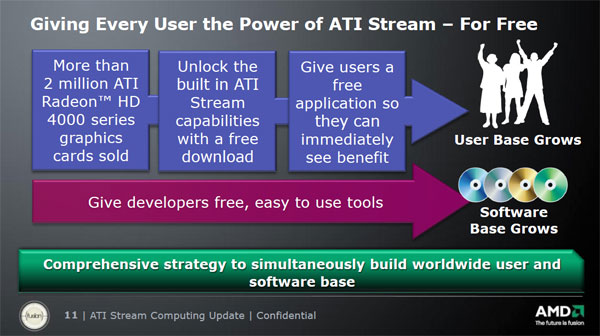 AMD claims to have 2 million HD 4000 series GPUs in the market creating a pretty large user base for ATI stream compatible applications.  As of today, stream applications are NOT enabled with publicly available drivers but that will be addressed in the next revision of Catalyst coming in December.  Once that update is ready, all 2 million of the Radeon HD 4000-series cards should be stream compute ready and will be able to download the new Avivo Transcoder for free as well. 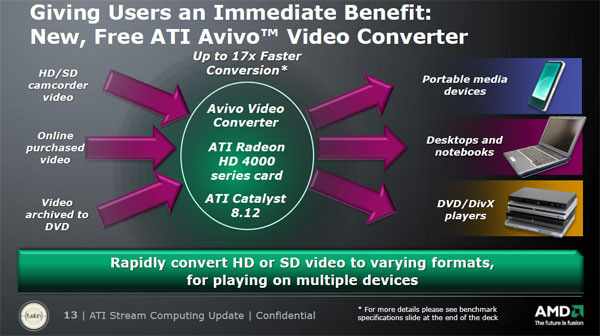 On December 10th, when AMD plans to release the Catalyst 8.12 driver with support for Stream computing, the ATI Avivo Video Converter will also be made available for a free download to all Radeon HD 4000-series owners.  What will this transcoder do exactly?  Much like NVIDIA and Elemental Technologies’ Badaboom program, the Avivo Video Converter will use the GPU to accelerate converting video from formats like HD/SD camcorders, online purchased video and DVDs and compress them into H.264 videos of various qualities to be used on different devices. 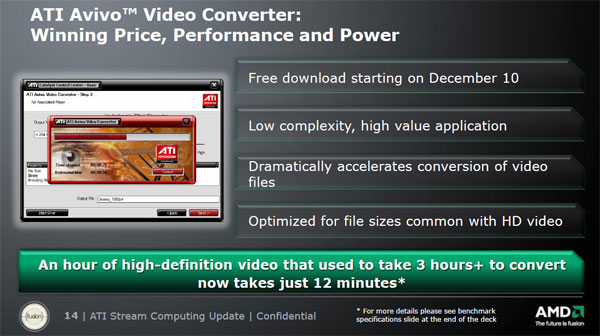 The application will be built into the Catalyst Control Center and will use a similar style of low complexity design that is also apparent in Badaboom. 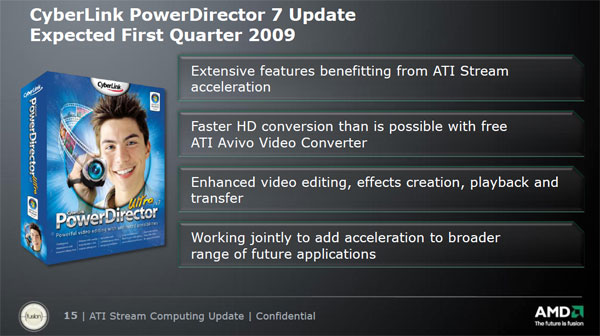 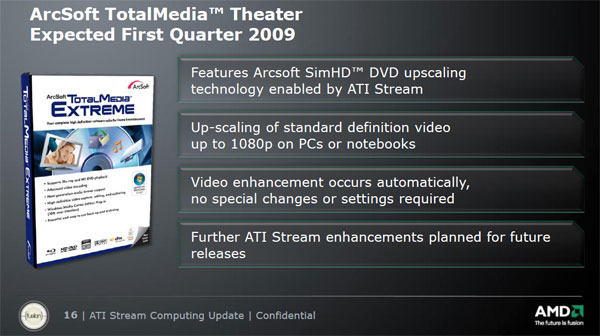 Other consumer applications like CyberLink PowerDirector 7 and ArcSoft TotalMedia Theater will be available in the first quarter of 2009 to expand in the ATI stream computing environment.  Both applications will use the power of AMD’s GPUs to accelerate portions of the workflow that they can: HD conversion, video effects, up-scaling to 1080p video and enhancement, etc. 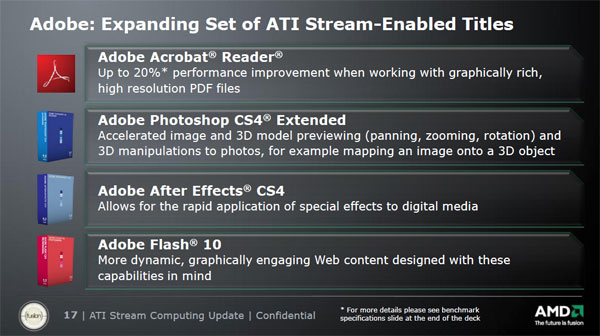 Perhaps NVIDIA’s bright feather-in-the-cap has been its marketing partnership with Adobe – when the CS4 software was released last month NVIDIA was definitely pushing the fact that its GPU would accelerate many of the programs including Photoshop and Premiere.  It turns out that MOST of these applications with also be accelerated by ATI’s stream computing because they were built around DirectX and OpenGL, not CUDA.  This was something I alluded to several times in my posts on the issue, but it is good to see it from the horse’s mouth, so to speak.

What is not on the list is Adobe Premiere Pro CS4 – an application that will only be accelerated with NVIDIA when using the $2000 Quadro CX graphics card.  AMD told me that it is working on a solution that will also work with Premiere’s plug-in system but that the one using Elemental’s RapiHD design is very much NVIDIA-specific. 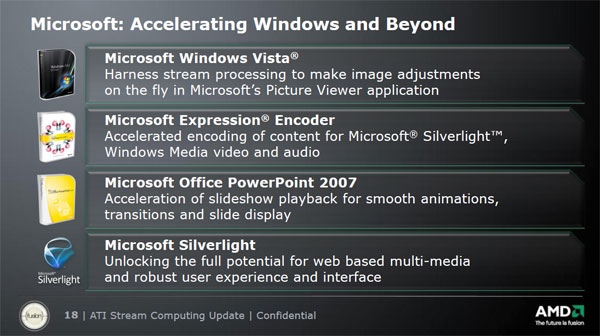 Microsoft is also using the GPU for computing in various applications including Silverlight and even PowerPoint!