What we are reviewing today is actually a pair of these powerline networking devices included in the Linksys PLK300 kit.  As per the box and description of the unit online, this powerline networking solution is rated at 200 Mbps but the fine print tells us that this actually means that speeds UP TO 100 Mbps each direction are supported simultaneously.  While you will definitely need two of these devices to start your powerline network you can upgrade and add to it buying ordering individual units as well. 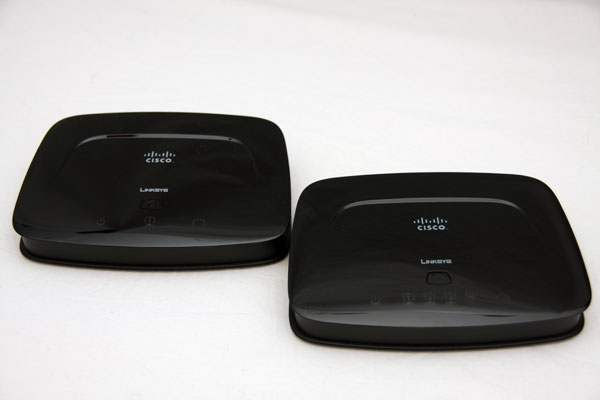 The PLK300 kit consists of two powerline networking nodes, one of which is model number PLE300 and one that is model number PLS300.  The only difference between the two is that one integrates a 4-port 10/100 Ethernet switch.  Because the technology in these devices maxes out at 100 Mbps there is no real need to exceed the 10/100 switch speed.

On the exterior, the devices look basically identical though one has four lights for Ethernet connectivity and activity while the other has just one. 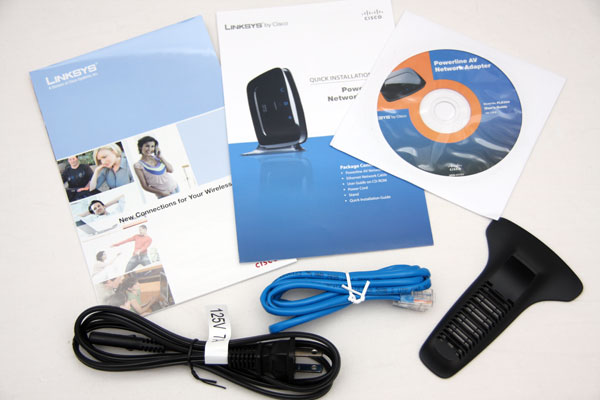 Inside the box (of our separate single unit) you’ll find very basic components including a power cable, a Cat 5 networking cable, a stand, basic instructions and a CD with the user guide on it.  For the two-piece kit you’ll receive two each of the power cable, Ethernet cable and stand of course. 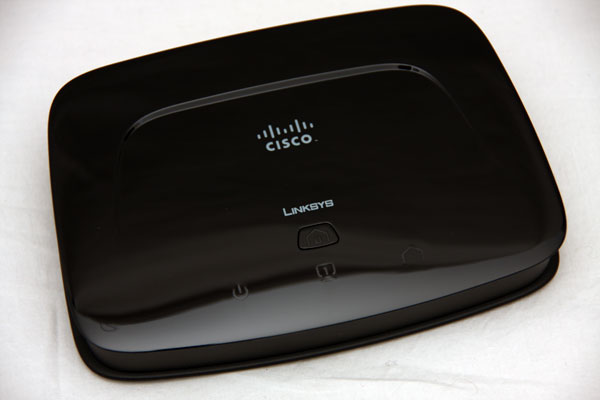 The single button on the top of the device is called the “HomePlug Simple Connect” button and is used to configure security on your powerline network fairly easily.  Basically, you can hold the button down for 10 seconds and then 2 seconds to reset the password and then send that password to the second device so that they can “re-pair” the encryption codes.  Adding in a third or even more devices is easy as well. 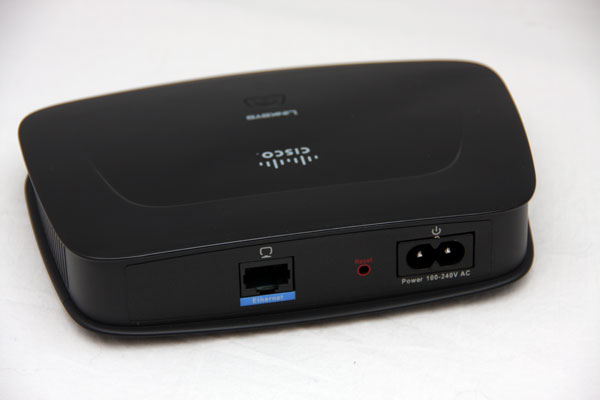 On the back of the PLE300 device you can see the connections are very straight forward: one 10/100 Ethernet port, a reset button and a power connection. 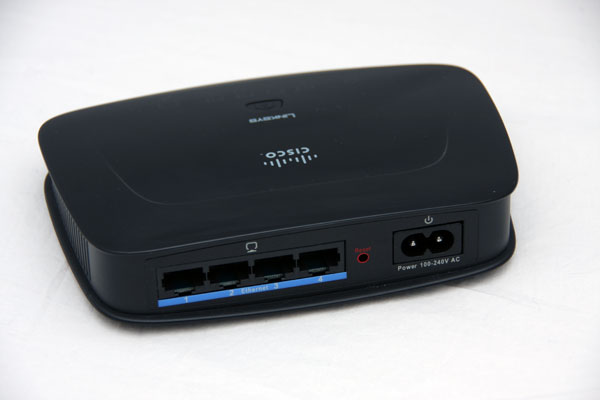 The PLS300 looks the same except for the inclusion of four total 10/100 Ethernet jacks. 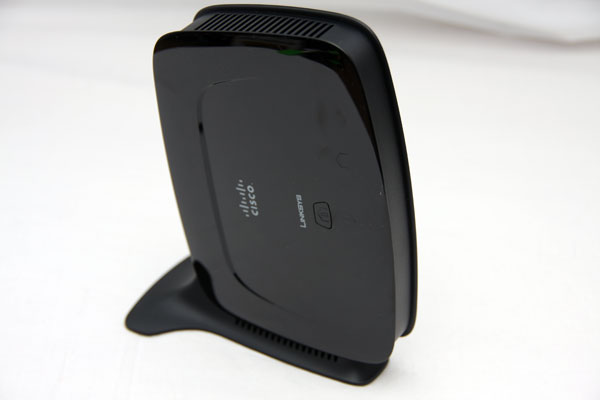 And just in case you like that “on the side look” Linksys has included stands that will allow you to mount it vertically or you can even mount it to the wall via some mounting holes on the back of the device.

Installation of the Linksys powerline networking kits could not be any easier – there are no drivers and no software requirements at all.  For probably 99% of users you will need to simply plug in one device to a power outlet near your router and then connect its Ethernet port to your router and then plug in the second node elsewhere in the house and then plug its Ethernet cable into the PC or switch.  Voila, instant network.

It really is that simple, but there are a couple of things to watch out for.  First, you absolutely MUST plug the power cord directly into the wall socket as you cannot pass the device through your typical surge protector or battery backup.  The surge suppression actually filters out the signal that the powerline networking protocols use so the two units will be unable to communicate if either is behind one.  Extension cords seemed to work fine however.

Location of the powerline networking nodes in the homes wiring structure also appears to directly affect performance – speeds were better when using power outlets on the same circuit and slower when on separate.  If you have the option then obviously same-circuit connections are best.

I ran some quick performance tests using a set of three nodes (one kit and one additional PLE300) in my home.  The house was built in 2004 so the wiring is pretty new so I am unable to tell if you degraded powerlines make a difference here but I am betting strongly that they will.  To test the bandwidth between the nodes I connected notebooks to each end that had Gigabit Ethernet ports and ran some tests using “ntttcp”, a common networking test we have used since the days of the nForce3 chipset.

Here are my results: 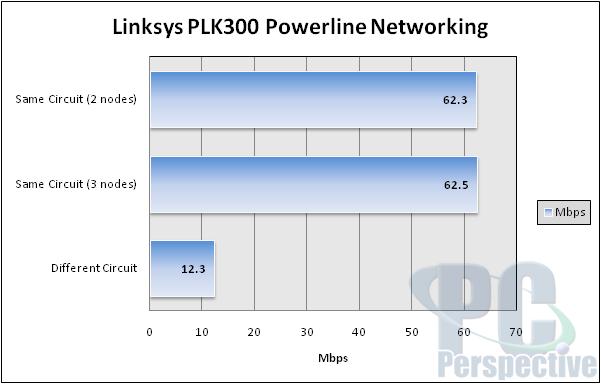 As you can see speeds varied pretty dramatically depending on configuration in the house.  The first result shows the best case scenario where the two powerline networking nodes are located on the same internal circuit of electrical wiring.  The second result shows performance between the same two nodes but with the addition of a third node on the network located OFF the same circuit; basically I was testing to see if having an off-circuit connection would adversely affect performance of the same-circuit nodes but that didn’t turn out to be the case.  Performance at both results was at 62 Mbps or so – equating to a maximum transfer speed of just under 8 MB/s.  While that isn’t incredibly fast for users that have seen Gigabit Ethernet at work, it’s more than fast enough for low-to-medium sized data transfers and any kind of Internet or streaming media on your home network.

The result for the off-circuit bandwidth was not as impressive, coming in at just over 12 Mbps or just over 1.5 MB/s.  The good news is that those speeds are still good enough for Internet, streaming media (like an HD SlingBox) and moderate file transfers.  The bad news is that for anything else like large movies, system backups, etc, that kind of network performance is really pretty awful and even the aging 802.11b might be a better option.

I originally looked into powerline networking kits when I was putting a computer in the basement but had no desire to run Cat 5 from my attic above the second floor all the way down to it.  The prospect of being able to grab a kit like that and get speeds up to 100 Mbps up and running so quickly was appealing even at a slightly higher than expected cost.   Luckily for me, all I really wanted was a connection for Internet connectivity and basic data transfer (SlingBox of course) so even the much lower than expected speeds of 12.3 Mbps were acceptable for my use.  I could see many areas and consumers for which that wouldn’t be acceptable though – especially since 100 Mbps speeds were advertised right on the box.

As of this writing you can find the Linksys PLK300 kit to get your powerline network started selling for just under $145.  The single units are selling for $74 (PLE300, single port) and for $83 (PLS300, 4-port).  That doesn’t really make the Linksys powerline system a bargain but to me $150 is a great price to pay for saving the time and suffering required to get dedicated wiring to where I needed it in the house and doing it quickly.  I do see myself moving to a hard wired Gigabit network in the basement someday eventually but for now, in this busy season with work and holiday, powerline networking is proving to be a great convenience even if it is a little light on performance.

Be sure to use our pricing engine to find the best prices on Linksys powerline networking and anything else you might need: 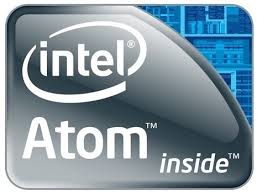 Intel has some good news for GLOFO 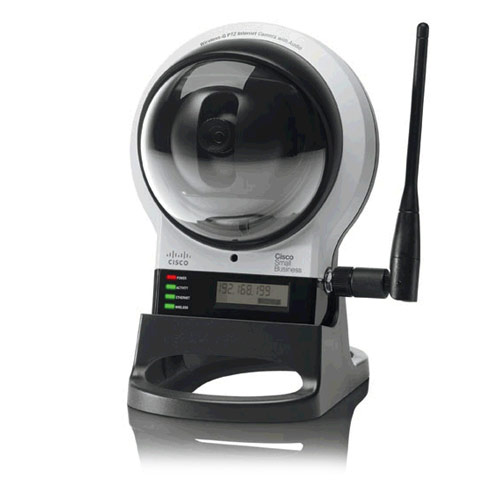