How Overclocking Works on the Core i7

As I initially mentioned in our CPU discussion, with the new Core i7 architecture comes a new way of clocking, and thus OVERCLOCKING, the processors.  While AMD got rid of the front-side bus quite a few years ago, this is Intel’s first attempt at doing so with a consumer product and thus we need to take an initially complex new technology and break it down for you.  In reality the concept is not too difficult when separated into its individual topics: system bus, multipliers and Dynamic Speed Technology, aka Turbo Mode. 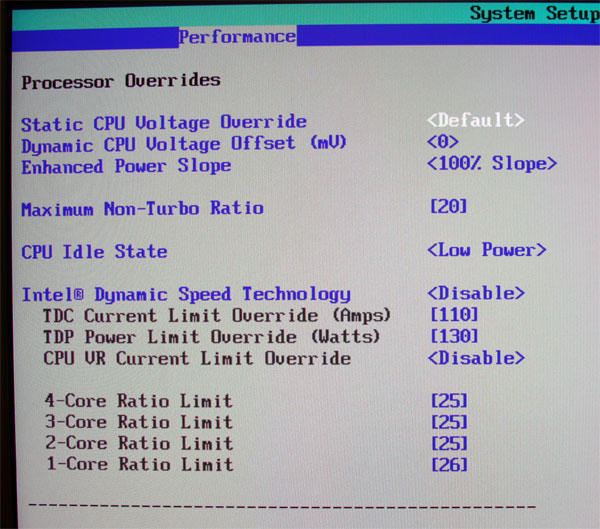 If we look at this example screen shot from the Intel X58 “Smackover” motherboard we’ll see much of the overclocking functionality.  Skipping past the voltage settings mentioned first, the setting Maximum Non-Turbo Ratio exists and is set at 20.  This is what you are probably used to seeing labeled as just the multiplier itself and it works just as you expect:
So for that example above we are emulating a Core i7-920 processor with the Core i7-965 Extreme Edition.  This does NOT mean that Intel’s SpeedStep technology and power savings technology will be turned off on your system – in fact the multiplier will be dynamically adjusted from a low point of 12x (a 1600 MHz processor) up to this maximum non-turbo ratio as the CPU load demands.  Note that even with an unlocked Extreme Edition processor, you can set the non-turbo ratio any higher than the base frequency of the CPU.

The next set up of options refers to that Dynamic Speed Technology that we will keep referring to as the Core i7’s Turbo Mode.  With this DISABLED the system works just like you would expect: all four cores of the Core i7 CPU will be kept between that 1600 MHz and 2660 MHz (in our previous example with a Core i7-920) as the CPU load demands.

With Turbo Mode enabled, things get a lot more interesting.  Again, skipping past the voltage and current modifications you can do, you’ll see four other ratio limit settings labeled for 1-core, 2-core, 3-core and 4-core.  These ratios indicate how far the processor cores can be overclocked in relation to the number of processor cores actually being loaded and used at the time.  As the BIOS screen shows above, when 4, 3, or 2 cores are loaded, the multiplier on the cores can be adjusted to as high as 25x.  When only a single core is loaded, meaning a single threaded application is really all that is running, then the multiplier can be adjust to as high as 26x.  Note that with all non-Extreme Edition processors, the ratio limits for the Turbo Mode are set at the Max Non-Turbo Ratio +1 for the 4, 3 and 2-core limits while the 1-core limit is set at the Max Non-Turbo Ratio + 2.  So for the Core i7-920 CPU, with a standard 20x ratio, the Turbo Ratio limits would be set at 21x and 22x respectively.

The term “as high as” is important here because in our testing the multiplier does in fact vary quite a bit depending on the work load and may not reach its highest possible setting.  If you have an unlocked processor, the only one of which will be the Core i7-965 EE at launch, then you can up to multipliers on Turbo Mode as high as 40x on this particular motherboard.  That doesn’t mean that your CPUs will in fact run at 5.22 GHz (40 x 133 MHz) but just they CAN if the system permits it.

What does the system use to judge if the multiplier actually WILL be increased? The algorithm is complex and it is likely that Intel will never share all of the details, but there is in fact a dedicated processing unit on the Core i7 CPUs that monitors temperatures, load levels and voltage/current levels to decide how far the cores on the processor can be pushed safely.  So depending on your system ambient temperature and how well you cool the processor, the PCU (power control unit) can adjust the clock rates accordingly.

This is both good and bad: that means you are never actually setting the exact high multiplier on the CPU but it also means that overclocking is considerably easier and safer for beginners or those not interested in spending hours tweaking.  For the casual enthusiast, you can simply set these 4, 3, 2 and 1-core ratio limits to a higher setting and be assured that most of the time, the CPU will keep you from screwing it up. 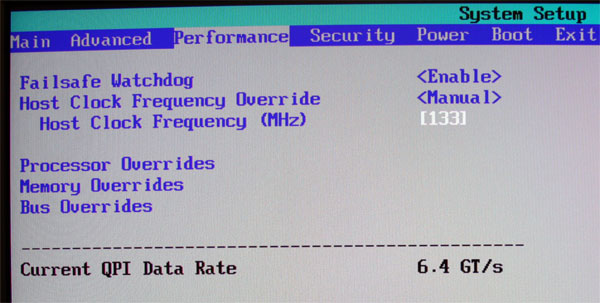 So now that THAT’s explained we should look at the host clock bus frequency and how it affects the processor and overclocking.  The system bus that pushes the memory frequency, CPU frequency, north bridge and south bridge chips defaults to 133 MHz on all of the Core i7 processors.  When increase this bus speed you are increase the clock rate on all of those devices in regards to their multipliers.  For example: on the Core i7-920 that uses a 20x standard multiplier for its 2.66 GHz clock rate (20 x 133) if you bump up the clock to 150 MHz, you’ll be pushing the standard non-turbo clock rate on the CPU to 3.00 GHz (20 x 150).  This also means that you’ll be able to turn the multiplier down on the processor while increasing the host clock bus speed to overclock in a fashion that all enthusiasts are likely to be familiar with. 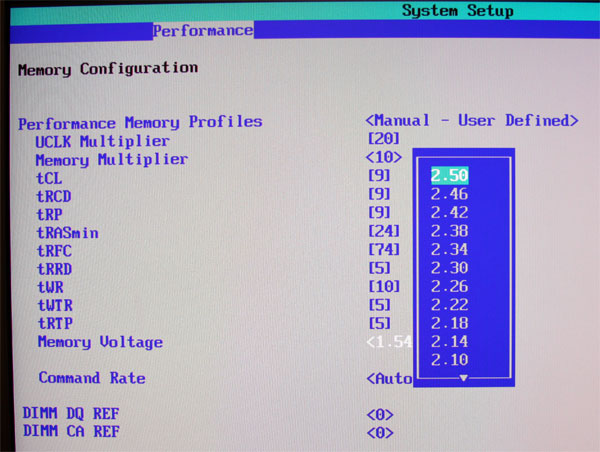 You’ll also be changing the memory clock speed as well when you adjust that host bus speed.  The memory controller on the Core i7 processor has its own multiplier available as seen here (different memory voltages are being displayed as well).  Multiplier options include 12x, 10x, 8x and 6x so you have a lot more flexibility with your memory speed that perhaps many people thought we would have.  The default memory speed is 1066 MHz using the 133 MHz bus speed with an 8x multiplier.  Bumping that multiplier up to 10x results in a DDR3-1333 speed and 12x results in a DDR3-1600 speed.

Memory speeds with the new Nehalem core have been in question for a long time: many thought that you would simply not be able to apply more voltage to the memory than 1.6v due to processor limitations.  As we have found out that is not the case and you can see here that Intel’s own X58 “Smackover” board offers voltages up to 2.50v – well above the default.  However, there is still some debate on what voltages you should feel safe with.  In our documentation from Intel on overclocking these systems one line clearly indicates: “It is very important to check the memory voltage after applying the profile (XPP) to ensure that the DIMM has not selected a memory voltage above 1.6V.”  Obviously there is a direct connection between the voltage to the memory and the voltage to the processor though this was not the case with AMD’s Athlon 64 or Phenom CPU designs.  It looks like if you want to push your memory dramatically you had better be prepared to have good cooling on your CPU as the voltages go up. 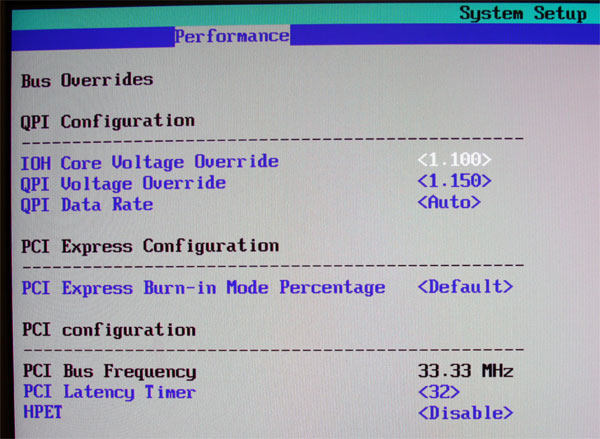 There have been several voltage options on the screen shots above that I basically skipped through.  Most of them should be self explanatory, but just in case:
The voltages on the screenshot above are much more in line with what you normally expect when overclocking.  The IOH voltage controls the power to the north bridge and may need to be increased if you are overclocking the host system bus dramatically.  The QPI voltage controls just what you expect and you can also see the QPI data rate to be set here as well.  Options for it: 4.8 GT/s, 5.866 GT/s and 6.4 GT/s and speeds here don’t seem to be affected by the host bus clock at all.

Is the AMD 65nm Really Slower? 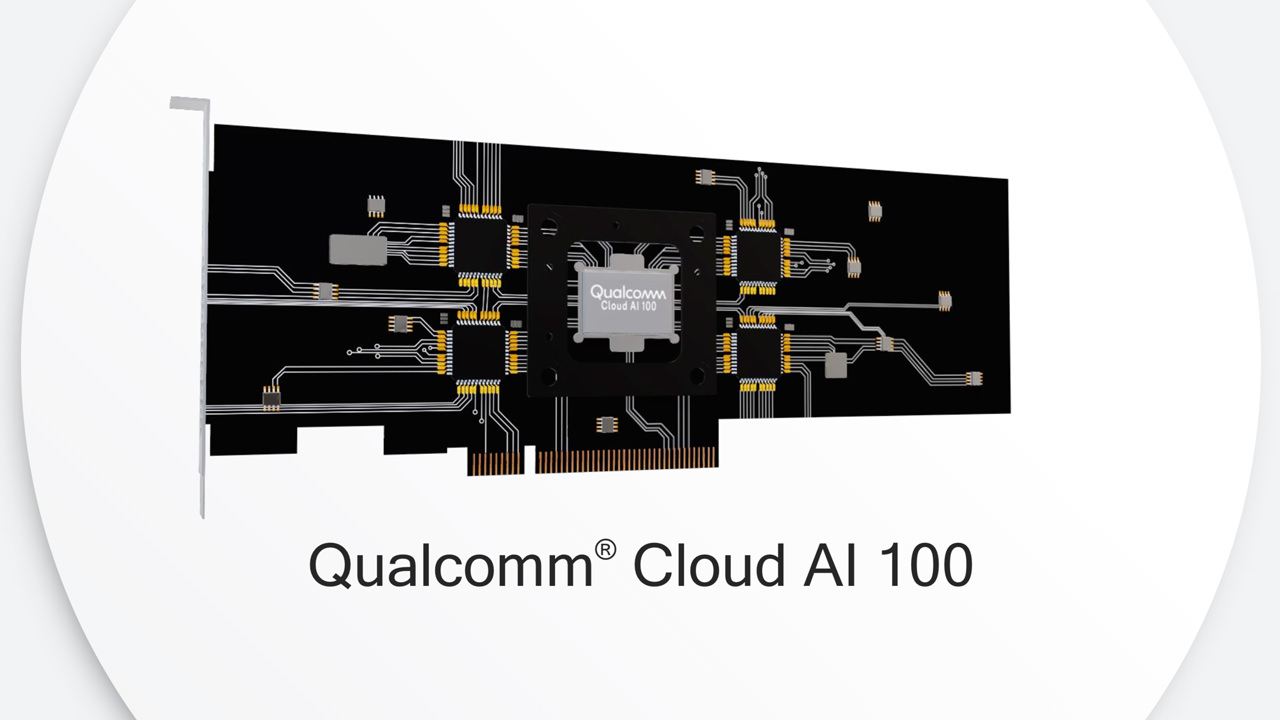