The Intel Core i7 CPUs

So now that we know that guts of everything that makes up the Intel Core i7 series of processors, what do the physical specimens themselves have to offer?  As you might expect, from an exterior appearance the Nehalem-based CPUs are really quite plain and look remarkably similar to their older brother the Core 2: 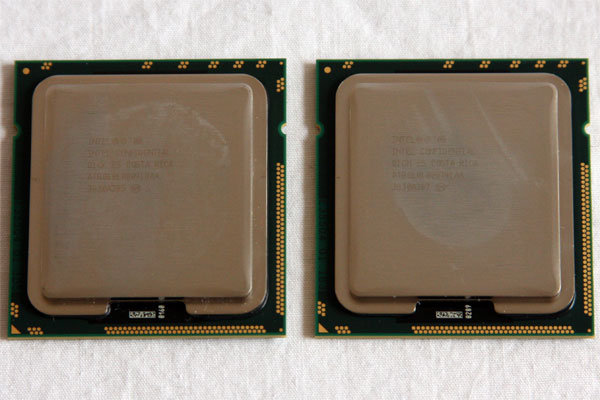 
The actual die is hidden by a heat spreader very similar to the ones we have become used on the Core and Core 2 series of processors and they do in fact use a very similar mounting mechanism.  Rather than having pins on the CPU, the pins are located on the motherboard socket thus in theory preventing a lot of damage to the processors by end users during installation.  This time around though the pin count is upped from 775 to 1366 making the new Nehalem Core i7 processor socket known as LGA1366.  How very intuitive! 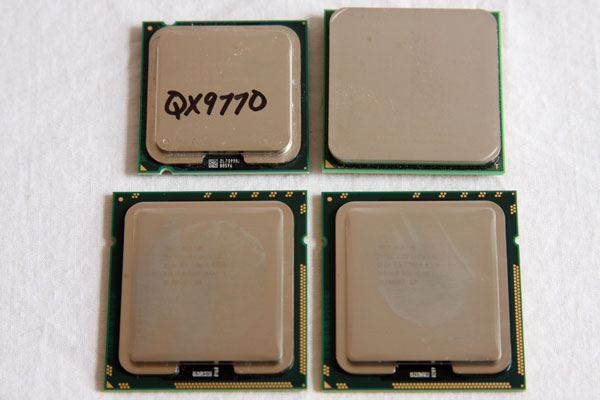 For a size comparison I have provided the above image: the two Core i7 CPUs rest on the bottom row while the Core 2 Extreme QX9770 LGA775 (left) and AMD Phenom X4 processor (right) take the high road.  You can see that the new Intel Core i7 CPUs are indeed just larger versions of the Core 2 packaging with a couple of notches on the left and right hand sides to prevent improper directional installation in the CPU socket. 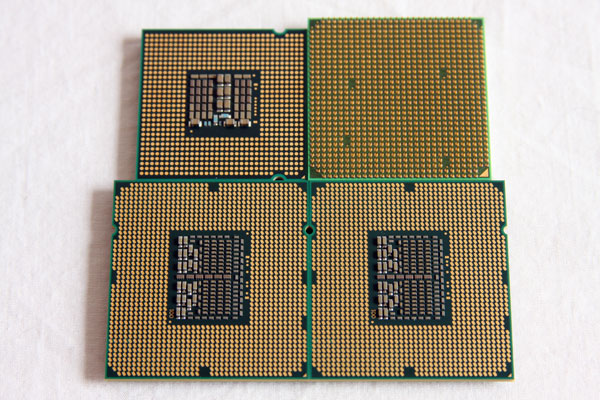 One more for good measure: the 1366-pin Nehalem-based designs on the bottom clearly have many more contacts than the 940-pin Phenom or 775-pin Core 2.

One note about today’s product announcement is that Intel does not anticipate having product for sale in the channel until sometime “in November” and today we are actually bringing you a sneak peek of the products as they will be available later in the month.  The SKUs coming to market this year include:

Three CPUs will be available for purchase this month going from the Extreme Edition Core i7-965 down to the Core i7-920.  All three processors share a surprisingly high amount of specifications including memory speed, thermal dissipation and cache size.  Of course all are built on the Intel Hi-K 45nm process technology.  As we have seen in previous generations only the Core i7-965 Extreme Edition will have the overspeed protection removed to allow for a much more robust overclocking experience.  The QPI speed on the EE CPU is also higher allowing for a faster connection to the north bridge and PCI Express 2.0 connection though performance advantages of this rate change are still a question in my mind.

All three CPUs have a transistor count of 731M on a die size of about 263 mm^2 – significantly smaller than the current beast of the processing world, the GT200 from NVIDIA that sports 1.4 Billion transistors!

Pricing is still just an estimate of course since they are not going to be for sale today, but Intel has set 1k pricing at the following:
Two things stand out to me about the pricing on these first three Core i7 CPUs.  First I am pleasantly surprised to find that Intel would choose to offer such a low cost option for their first round of releases with the Core i7-920 selling for under $300.  Intel probably could have gotten away with keep all three SKUs over the $500 mark for such a new technology but now we will see some mainstream PCs have the ability to adopt the new core architecture pretty quickly.

The second point is that I seriously doubt we will see the Core i7-965 processor selling or $999 any time soon.  An unfortunate trend we have seen increase with the Core 2 Extreme processors is that they take a LONG time to come down to their 1k pricing; take the Core 2 Extreme QX9650 as an example of a CPU that has yet to reach that $999 price tag after exactly one year on the market.

The latest CPU-Z at revision 1.48 is already setup to properly recognize and report on the specifications and speeds of the Intel Core i7 processors.  It will become an invaluable piece of software as our tweaking and overclocking process begins.