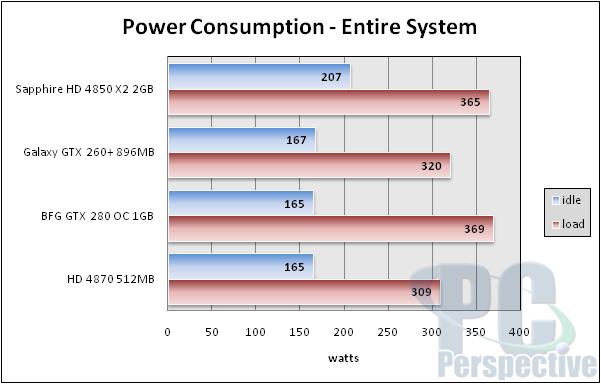 Even though AMD’s graphics cards have been the most power efficient of this generation, we knew that the Sapphire Radeon HD 4850 X2 card was going to draw a lot of power thanks to the doubling up of the GPUs on it.  The idle power consumption is unfortunately pretty high on this card coming in at 207 watts – a full 42 watts or so higher than the GTX 280 card.  The load power consumption paints a better picture though as it drew 365 watts compared to the GTX 280’s 369 watts; and because the Sapphire 4850 X2 card is a better performer overall than the GTX 280 it definitely pulls ahead in overall performance per watt.

It’s hard to argue with the results – the Sapphire Radeon HD 4850 X2 2GB card is a great performing solution that is only bested by the HD 4870 X2 2GB in terms of single graphics card performance.  When NVIDIA introduced the GTX 280 card back in June it had the performance lead by a large margin over even the dual-GPU Radeon HD 3870 X2 card.  It lost that lead when the HD 4870 X2 was released and ever since we have been waiting for NVIDIA to bring us a dual-GPU based graphics of its own based on the GT200 technology.  Whether it is business or technology related reasoning, NVIDIA hasn’t delivered and as such AMD keeps the lead going into the New Year most likely.

The Sapphire Radeon HD 4850 X2 2GB should pose an even greater threat to NVIDIA – it is a better solution for high performance gaming than the GeForce GTX 280, costs about the same as the GTX 280 and is more than $100 cheaper than the HD 4870 X2.  In some games the performance differences between the HD 4850 X2 and the GTX 280 were small; around 5% or so.  But in games like Bioshock the difference was MUCH more dramatic and I think we’ll see newer titles like Left 4 Dead, Fallout 3 and Call of Duty World at War accentuate those performance deltas even more.

The Sapphire Radeon HD 4850 X2 card has a great feature list even if there is nothing extraordinary on the spec sheet.  Support for up to FOUR monitors on a single card is a welcome addition and should get those excited by multiple monitors a little jittery.  You can still use the integrated HDMI output with on-board audio controller on this card – a feature that has been available for AMD customers since the 3000-series of parts.

Of course, the Radeon HD 4850 X2 is capable of running in CrossFireX mode as well – feel free to grab a pair of these cards and run quad-GPUs for an even more impressive gaming experience.  I do wonder though if that setup would support EIGHT monitors…

As of this writing, you can find the Sapphire Radeon HD 4850 X2 for as low as $415 on our pricing engine; it is also available at Newegg.com for $389 after a $20 mail-in rebate.  Those prices definitely put the GeForce GTX 280 cards in a tight spot: the lowest cost GTX 280 on our pricing engine is selling for $399.  Considering that the Sapphire Radeon HD 4850 X2 2GB card is able to outperform NVIDIA’s best single card solution while maintaining the same cost, many consumers will likely find the Sapphire card a better option. 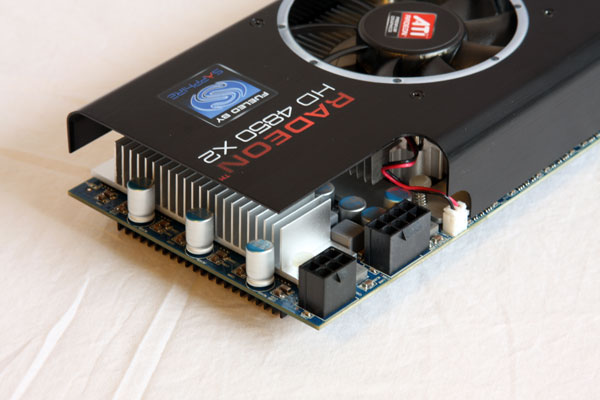 There are some caveats of course: in general I tend to prefer single GPUs to dual GPUs whenever possible – it is much easier for a game to take full advantage of one GPU than two but obviously AMD’s driver team was able to squeeze quite a bit out of the RV770 GPU in CrossFire mode.

The Sapphire Radeon HD 4850 X2 2GB graphics card is an incredibly fast enthusiast solution that takes advantage of AMD’s RV770 chip in a dual-GPU solution.  AMD and Sapphire now have a card that is price competitive with the GeForce GTX 280 cards and is actually faster than NVIDIA’s option in all of our gaming tests.  Features like support for FOUR monitors on a single board will definitely help edge some people to Sapphire’s solution as will potential support for quad-GPU performance using CrossFireX.  Even though I am a bit disappointed that we aren’t going to see mass promotion or other vendors offering this graphics card, Sapphire and AMD definitely have a winning product on their hands with the Radeon HD 4850 X2.