We needed this years ago

KVMs aren’t usually a topic of conversation in these parts, but when a product makes me nearly weep with joy, I can’t help but share it with the world. The new dual-link capable Belkin SOHO KVM is the answer to many user’s PC habits!

Every once in a while a gadget hits our test labs that really makes a difference in how we do things around here.  The advent of the 30″ Dell monitor, for example, let us test resolutions as high as 2560×1600.  The building of a NAS server allowed us to work with drive images and benchmark more efficiently.  I THOUGHT the Gefen 4×1 DVI DL KVM Switch, the first on the market to support 2560×1600 resolutions with dual-link DVI interfaces would be another such device; not so.  The device was plagued with problems and bugs, was expensive and required additional accessories to even partially work as we expected.

For those without experience, a KVM (keyboard/video/mouse) switch is a device intended to all a single monitor, keyboard and mouse configuration to control multiple PCs without having rewire the machines each time.  Using a button or keyboard press you would be able to move between each system so that you could use each independently.  Because I am constantly testing so many different pieces of hardware on a regular basis, a KVM is a requirement – I actually have four distinct test beds in my office attached to a single 30″ Dell 3008WFP monitor and Logitech keyboard/mouse combo.

Having been a user of various KVMs for years, problems arose when we moved to the dual-link DVI 30″ monitor because at the time there were no KVMs that supported dual-link connections.  The first one to do so was a model from Gefen, a well-known professional-level device manufacturer based in the US; the unit worked but had numerous problems.  First, it was expensive, still selling for more than $699 today.  Secondly, it required the additional purchase of accessories (another $70 or so each) called DVI Detectives that were used in pass through between the video card and KVM connection in order for the monitor’s ID to be properly remembered and emulated; otherwise the PC would have to “rediscover” the monitor each time you switched back to it which is both annoying and can be problematic.  Also, the Gefen unit did not provide USB emulation meaning that each time you switched between PCs the computer had to rediscover the USB devices (with the familiar Vista ba-dum and dum-ba sounds).  That also meant that some automated benchmarks would not work or would lock up when switching between systems – a big drawback especially for a lot of CPU/platform based testing.

For years now I have DEALT with the issues and just happened to come across news about a Belkin device that claimed to fix all of these issues.  Obviously I was eager to buy one and test it out.

The new Belkin SOHO KVM is offered in both 4-port and 2-port designs though otherwise the functionality between them remains the same.  For our testing we are looking at the 4-port version, model # F1DD104L. 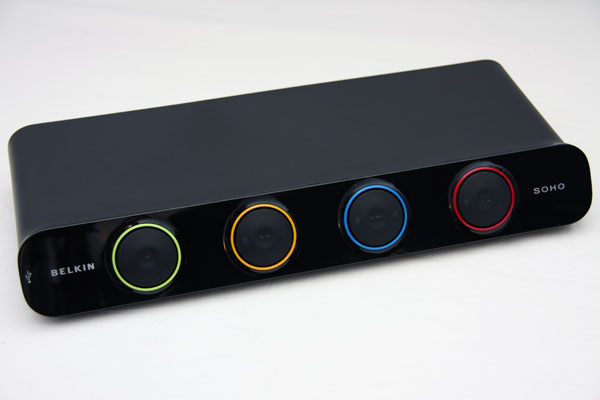 The unit is built entirely of plastic with a flat black finish on the top and sides and a piano black finish along forward facing section of buttons.  Rather than numbering the PCs that are attached to the KVM, Belkin has decided to color code them with green, orange, blue and red buttons and cables.  The only problem I have with that is telling someone to “switch to the orange PC” is a bit harder to remember than “switch to PC 2” – no big deal though. 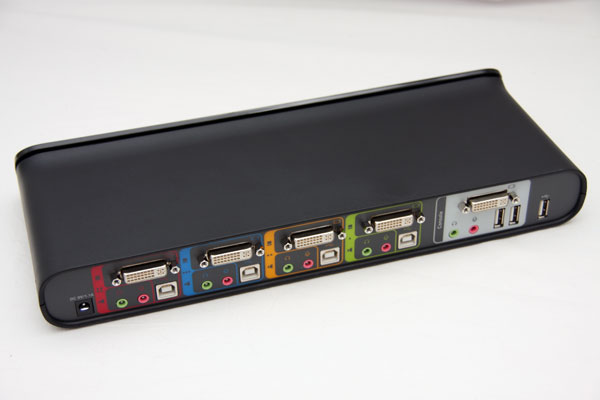 Looking at the back of the KVM we see all of the connectors that make the magic work and of course they are color coded to match the front button configuration. 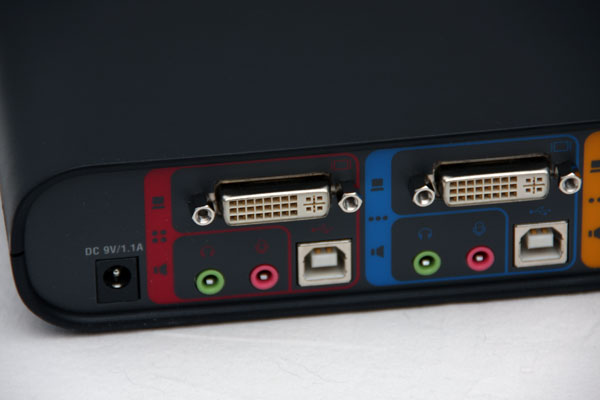 A close up of the left side shows us the required power connection as well as a close up of the red and blue PC plugs.  The Belkin unit supports standard 3.5mm audio and microphone jacks and only requires a single USB input for both the keyboard and mouse connections.  The DVI port is fully compatible with dual-link connections of course. 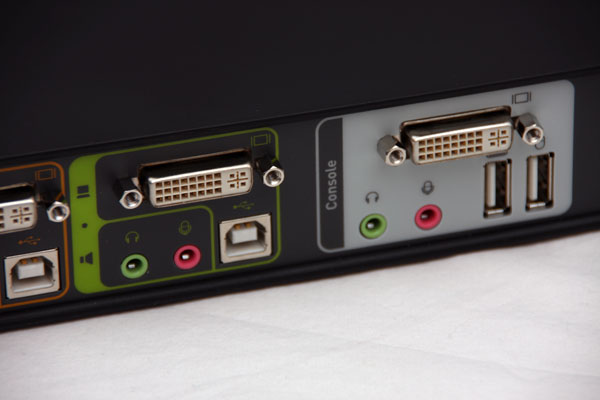 Here we see where the host monitor and accessories can be plugged in – two USB ports are there for the keyboard and mouse of your choosing. 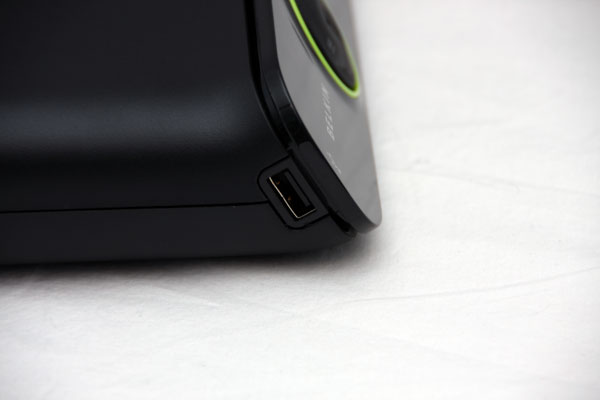 Another great feature of the Belkin KVM is the inclusion of two extra USB ports that essentially act as a hub to all of the PCs connected to it.  That means that if you have an external hard drive or other accessory that you want to be shared among all of the machines you can just plug it into the KVM and you’ll be able to access the drive from any PC.  This port is located on the left side of the front of the KVM and the second port is located just to the side of the host devices area on the back of the unit. 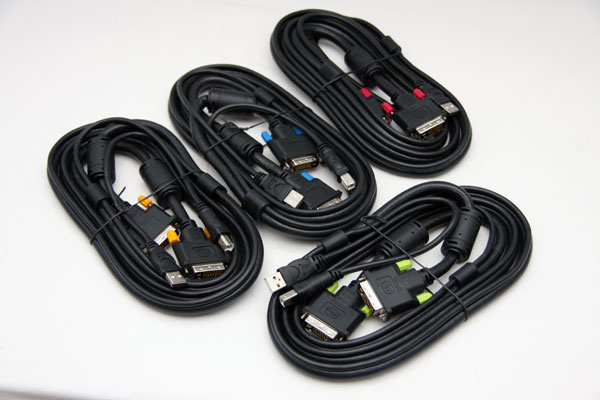 Inside the box with the KVM comes a complete supply of KVM cables for all four PCs you can attach.  They are color coded as you can see for idiot-proof installation.  Cable length is about 6ft and that SHOULD be enough for most users though you can always get longer cables from another source like MonoPrice.com. 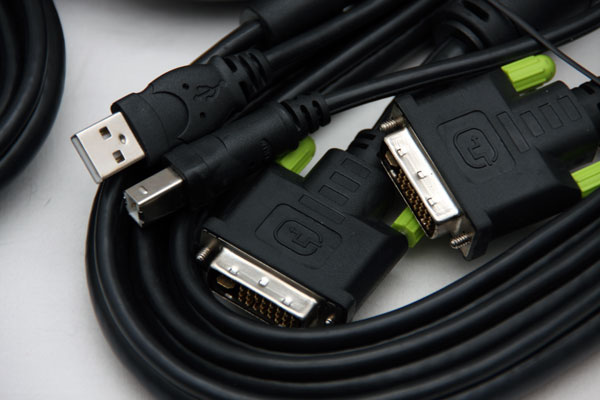 The connections include male-to-male dual-link DVI cables for the monitor and graphics cards and USB A and B type plugs for the PC and KVM respectively. 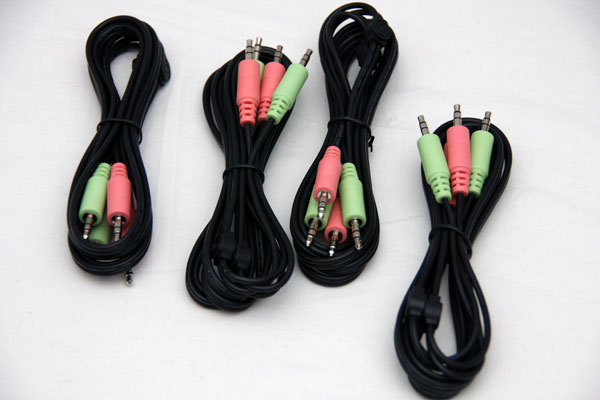 Belkin also included the necessary 3.5mm cables for the audio and mic ports for all four computers. 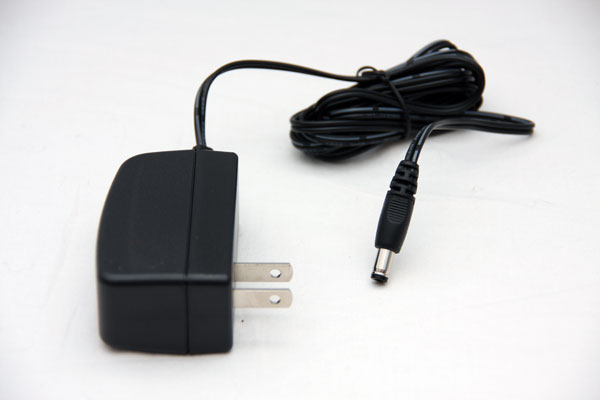 The KVM does require the use of the 9v AC adapter that is of course included. 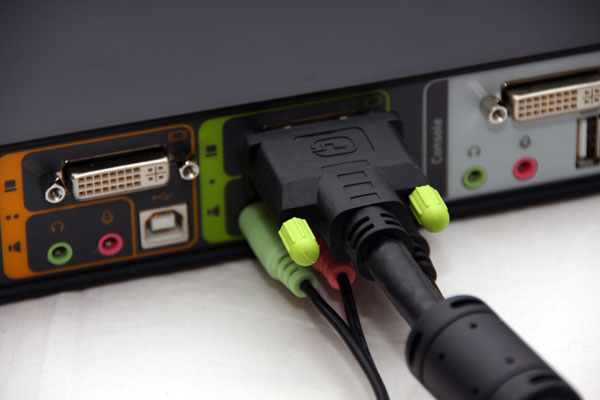 Installation of the cables was very simple and you can see above the four connections (DVI, audio, mic, USB) all firmly attached.  When all four PCs and the monitor devices are attached the back of the device is definitely very crowded – getting to a single cable in the mix can be hassle.  But that seems to be true for any KVM I have used over the years. 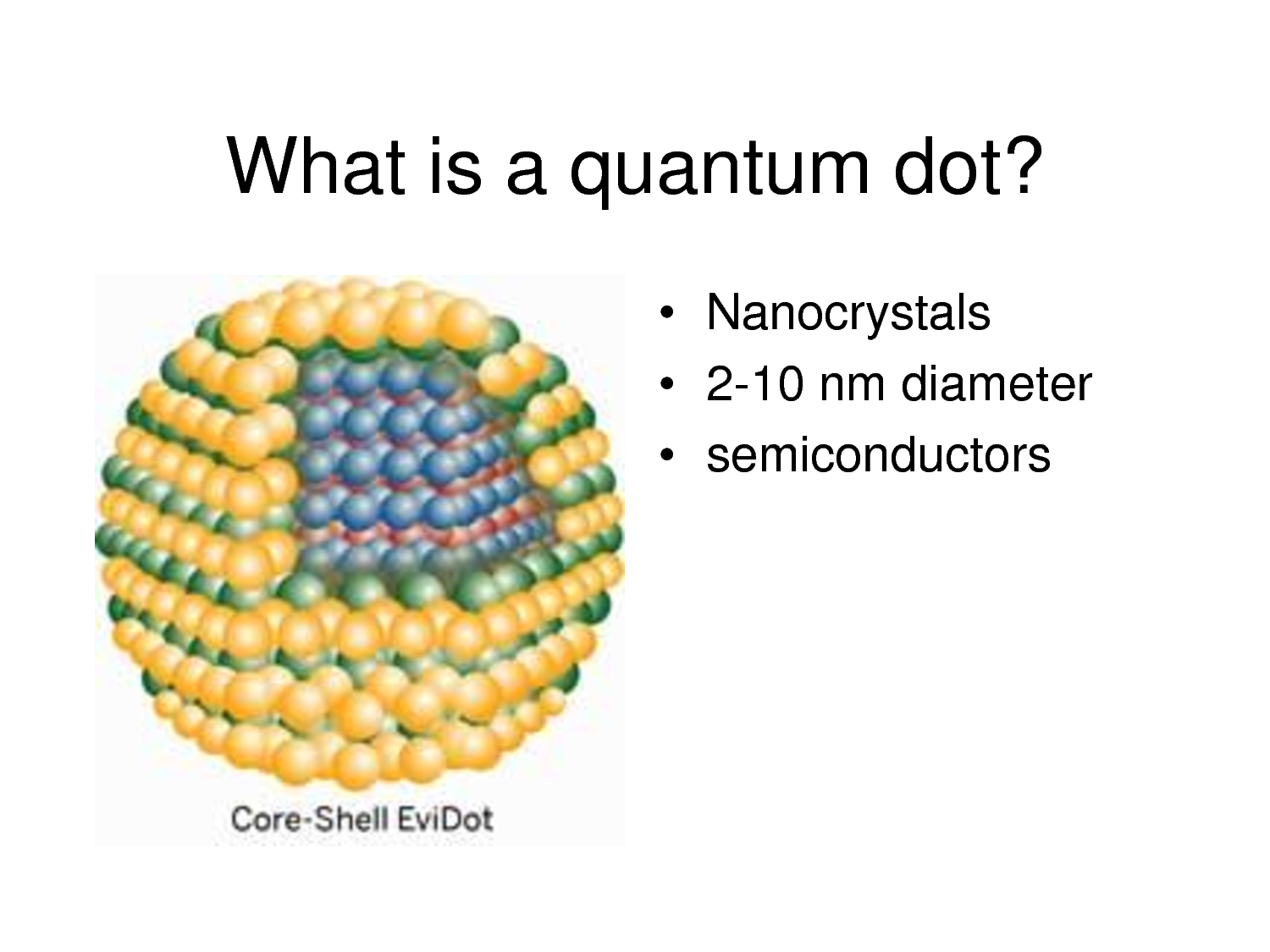