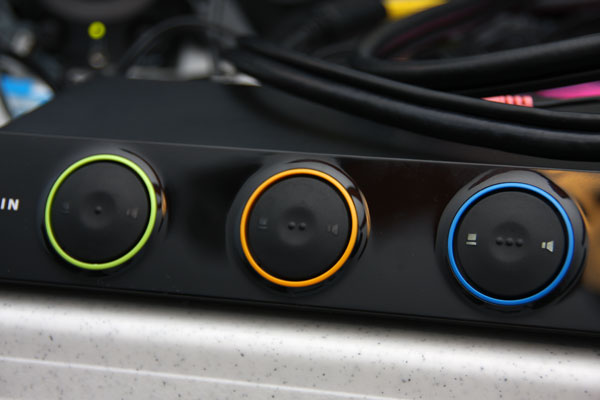 On the front of device, inside each circular button area, lies some of the more impressive features of the KVM from Belkin.  You can see in the photo above that the blue circle is selected (active, in use) by looking at the PC light and audio light.  (Sorry taking pictures of the lights was difficult – they are much brighter than what they appear here.)  What was surprising to me was that each circle actually consists of three buttons: one for the KVM, one for the audio and one in the center for both.  Essentially you have the option of moving BOTH the KVM and audio functionality between the four PCs at any time or moving only one or the other.  That means you could be using the keyboard, mouse and monitor on the blue system while listening to audio and using the mic on the green system. 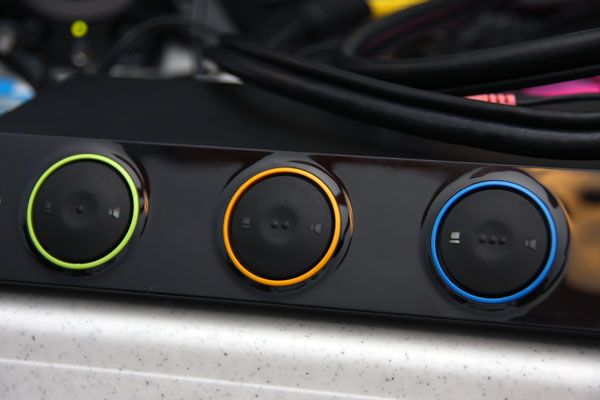 Here you can see that exact configuration – the blue system is powering the display and keyboard/mouse units while the audio from the green computer is still being piped out the speakers connected to the KVM.  This has a lot of great potential advantages including the ability to use Skype on system while working on another, or listening to music on one while configuring another.  This is a unique feature for the Belkin SOHO KVM that I was really impressed with.

The Belkin SOHO KVM in Use

As I had hoped, the Belkin KVM has been flawless in the execution of its features after a few weeks of use.  The unit has complete support for resolutions as high as 2560×1600 and it includes built in DDC (monitor recognition) without having to use external devices.  Switching between systems only takes a couple of seconds for the video to re-sync.

The USB emulation also works perfectly – we have not had any issues with the keyboard or mouse in normal use or while benchmarking – no more USB attach/detach sounds to be heard here.  Because emulation begins as soon as the system is turned on, you don’t even have to “select” each system while it is booting up – it will come up to windows perfectly without issue.  Speaking of hearing, the audio and microphone connections were also flawless and the ability to listen to audio from one system while using another worked as expected. 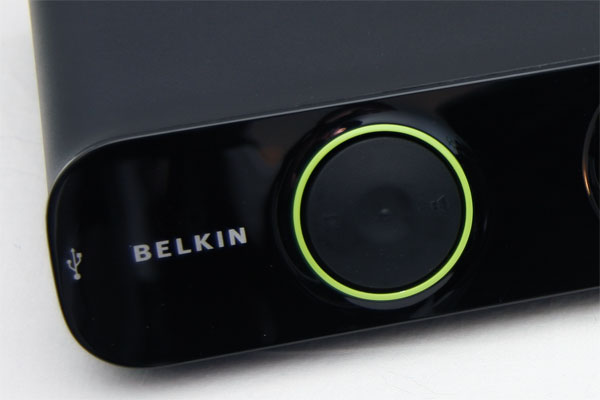 There a couple of drawbacks to the Belkin SOHO 4-port KVM though including the inability for mouse or keyboard software to be used on any of the systems attached to it.  Because the Belkin unit emulates a keyboard and mouse to each system, it has to emulate a pretty generic configuration and such your system won’t recognize the exact mouse you are using or any of the fancy features it might offer.

Audio is limited to stereo output since there is just a single connection though you could potentially use the USB hub ports for audio output if you wanted.

Also, if you change monitors after initial setup, you’ll have to detach and shutdown each PC, unplug the KVM and then connect the monitor in order to clear out the older DDC monitor data.  Not a big hassle but something to be aware of.

I have been thoroughly impressed with the Belkin F1DD104L SOHO KVM Switch and would gladly have paid the same for it that I did for the entirety of the Gefen unit (about $800) – just don’t tell Belkin that because you can currently find this unit selling for under $200!  The 2-port unit is not as widely available yet though I imagine it will be $40-50 less.   If you have or anticipate having any kind of dual-link display in your future and you need a KVM, the Belkin F1DD104L SOHO KVM Switch with audio gets my full recommendation.

Be sure to use our pricing engine to find the best prices on Belkin KVMs and anything else you might need: