Adobe Photoshop CS4 takes advantage of the power of the GPU to work with images in a way that wasn’t really possible on standard CPUs before but creating a “digital canvas” that is interactive.  When working with very large and high resolution images in Photoshop, system memory is often the limiting factor, and by using the GPU and its extremely high memory bandwidth architecture Adobe is able to dramatically change how some features interact with the user.  While standard CPUs work with memory in a very sequential fashion (even the new triple-channel Core i7 from Intel) GPUs are used to working with massively parallel datasets in very large chunks lending themselves well to image manipulation.

NVIDIA’s Quadro CX allows for features like real-time image rotation, zooming and panning, all in a very smooth and progressive fashion.  The software also uses the GPU hardware for removing the very common aliasing artifacts (jaggies) in non-standard zoom steppings.

While impressive, none of these are really “benchmark-capable” changes to the system even though they are VERY important to real-world usage of the application.  What I decided to do for my Photoshop CS4 testing was to provide you with some videos of the new features at work and then describe them to you below in text.  I think you’ll find that new features and improvements are really quite impressive.

To enable these features in Adobe Photoshop CS4, go into the Performance section of the Preferences window and make sure that “Enabled OpenGL Drawing” is enabled.

The “Birds Eye View” feature in Photoshop CS4 allows the user to quickly zoom out of an already zoomed-in image in order move position on the image and revert back to the zoomed-in level in a different area.  In previous versions, and without OpenGL GPU acceleration, a user would either have to use a thumbnail in the corner to see find a new zoom section or just guess based on their zoomed-in view. 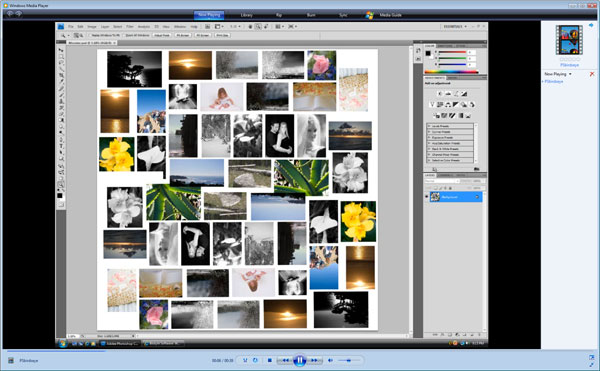 
In the video, you’ll see me show you we are working with a 20,000 x 20,000 pixel image with a 300 pixel/inch resolution – a VERY large image indeed – and then demo the birds eye view feature.  First, I zoom into an area of the image and then select the hand tool and press ‘h’, zooming me out with a new bounding box that I can move around.  When I release ‘h’ and the left mouse button the screen quickly zooms back to the same level as I was at before.  I then repeat the function after zooming in even closer.

The new “flick pan” feature for Photoshop could be seen as merely a fluff feature and I would tend to agree – it reminds more of the iPhone than of anything that would be THAT much more useful than the standard pan feature.  Regardless, you can use the hand tool to “toss” the image around the screen in real-time.  This video also shows off the rotate tool that I’ll discuss below. 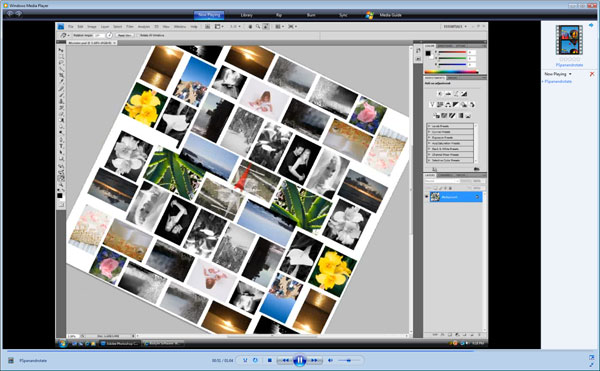 
Using the same 20,000 x 20,000 pixel image, you’ll see me zoom into a section of it and then use the hand tool to ‘flick’ the image around.  While the animation in the video may not show it very clearly, the motion has the same sense of momentum that flicking around on an iPhone has.   You can also see the rotate tool working its magic in the latter half of the video as well.

Using a nice ability of the Photoshop CS4 to enable OpenGL acceleration on some windows and not others, we are able to demonstrate in a side-by-side fashion how the GPU affects the work flow of image manipulation.  Using the graphics memory and its incredibly high bandwidth compared to standard system memory, Photoshop CS4 is able to give the user an instant, fast and smooth rotation – a far cry from what Photoshop users are used to on files this size.  No wait times and no dramatic change in canvas sizes required. 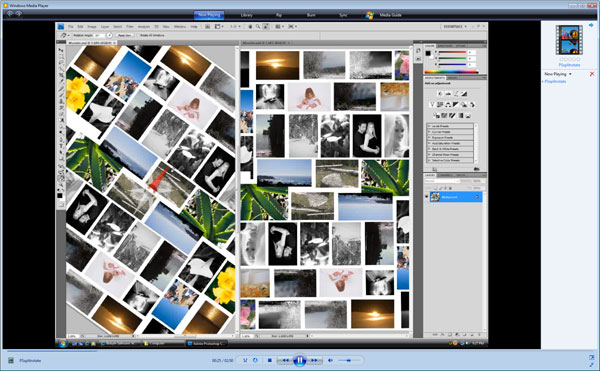 
In this video, the GPU accelerated panel is on the left while the standard Photoshop panel is on the right showing you what non-GPU accelerated CS4 looks and acts like.  You’ll see me select the quick rotate tool at the top of the screen and then move the mouse cursor to the left panel and easily rotate the image, slowly at first and then faster, all in real time.  Keep in mind that our screen recording software actually made the animations looks worse than they do in person as well!

On the right panel when you attempt to use the same tool, you are met with a message indicating that the feature is unavailable without OpenGL enabled performance.  I then set out to use the much more common rotate tool for Photoshop and attempt to rotate the 20k x 20k pixel image by 43 degrees to the right and am met with a VERY LONG WAIT…  So long in fact that I didn’t bother recording it all the way.

This is definitely a feature that could potentially offer dramatic time savings for professionals that work with files this size on a regular basis.

The zooming function changes a bit when used with the OpenGL accelerated CS4 model as well.  No longer will you see stuttering or preview lags during operation but instead with the power of the GPU the software is able to offer a smooth, and fast, zoom for files of all sizes. 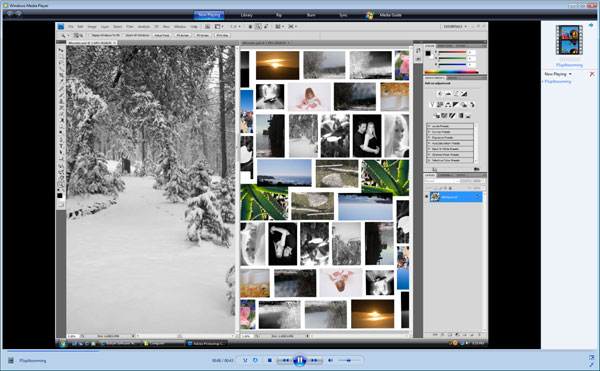 
In the video, I take the same split screen approach used above, with the OpenGL enabled window on the left, to demonstrate how the function differs with the Quadro CX card installed.  On the left I am able to click and then hold the mouse button when zooming in to get a smooth and gradual zoom into the image even when using an image of this size.  There is no hitching or stuttering along the way – but those defects are quite obvious when viewing the traditional zooming process on the right hand side of the screen.

Test 5: The Shack – a mix of everything

Our final video doesn’t really show anything different in terms of features but does offer a good overview of how quickly you can manipulate and move around in a large file very quickly with the power of a GPU behind Adobe Photoshop CS4. 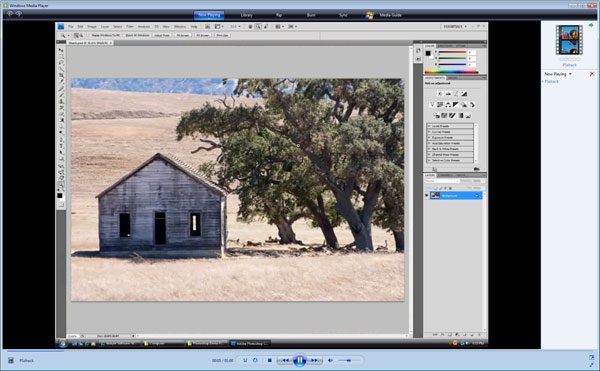 
In this video I start with some zooming and in fact get in close enough that we can differentiate with each individual pixel in a grid form.  I then zoom all the way out in quick and smooth motion then zoom back in some to test the flick and pan feature as well as the birds eye view.  Next I do some image rotation with the GPU-powered tool and then zoom and pan around the rotated image as well.