Unlike my testing with Adobe’s Photoshop CS4, the Premiere CS4 application and plug-in allows us a much more analytical discussion of the benefits of GPU computing.  In short, we have hard data to back up our opinions rather than videos with how things look and feel.

The first item to discuss is that in reality, Adobe’s Premiere CS4 software does not take advantage of GPU-based computing on its own.  Rather, a plug-in, supplied with the NVIDIA Quadro CX card, provides Premiere CS4 with an additional encoding option that utilizes the GPU to speed up H.264 video creation.  In some ways, the theory behind this plug-in is nearly identical to the software we detailed in our consumer-level video transcoding article last week.  RapiHD, as the plug-in is called, is in fact written by the same company that made Badaboom for NVIDIA: Elemental Technologies. 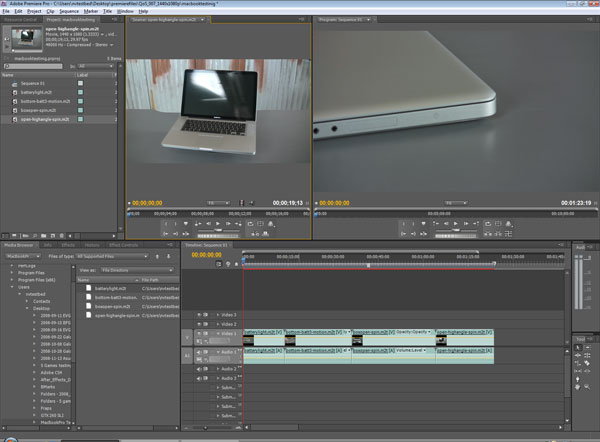 
For those unfamiliar with Adobe Premiere, it is a pro-sumer / professional level video editing application built for a wide range of users.  PC Perspective uses it for video editing (upcoming work) as do some other semi-professional videographers we have worked with.  RapiHD, only available with the NVIDIA Quadro CX, doesn’t come into the Premiere workflow until in final export mode of the software – once editing is done and complete and the user wants to render that video to a file.  In a standard situation, Adobe opens up its included encoder application, the users selects which encoder and codec to use and then lets the CPU do the work.  With RapiHD installed, there is simply another encoder option available to the consumer that utilizes the Quadro CX GPU for a dramatic performance increase.

As of today, the limitation of the RapiHD encoder is that it has the ability to ONLY encode into H.264 format – a bit of a disappointment for some but likely a smart move going forward as H.264 becomes the most commonly used codec for online and consumer media.

To test the RapiHD encoder from Elemental Technologies we exported the same projects in Premiere via both it and the Adobe included CPU H.264 encoder and matched the preset settings to as exact as possible.  The RapiHD encoder has a bit more flexibility than the Badaboom application and thus we were much more satisfied with the apples-to-apples benchmarks we were able to run.  The results we show you below will consist of a simple bar graph indicating render (encode) time of the video using the Quadro CX and RapiHD as well as the QX9650 CPU and integrated Adobe CPU-based encoder.  I have also included CPU utilization graphs for both the GPU-based and CPU-based encode process so we can see how much exercise the CPU is getting under each testing scenario.

Our first test takes a few 1080p movie trailers, combines them on the time line and then simply exports them to a 1080p H.264 format compatible with burning to a Blu-ray disc for playback.  Obviously, the actual copying to a Blu-ray never happens as this is just the process of encoding the video properly. 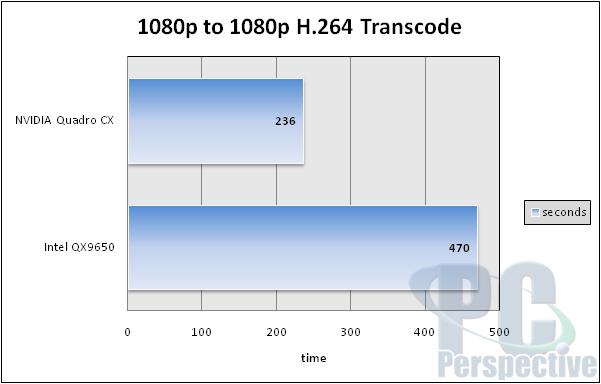 
The encode process using the Elemental RapiHD encoder on the NVIDIA Quadro CX took just under four minutes to complete while using the CPU-based Adobe encoder the process took nearly eight full minutes.  The GPU-accelerated encoder has essentially cut the rendering time in half – and while 236 seconds and 470 seconds doesn’t seem like a long time, extrapolating this out to 1 hour+ length videos you can clearly see how getting half of your render time back could save a lot of time.

The CPU utilization numbers also show an advantage for NVIDIA’s Quadro CX card – it only using about half of the total CPU power during its encode process while the Adobe encoder is basically complete tapping out the processor.  In theory then you could be doing other things on the rendering machine much more efficiently with a GPU-accelerator than with only a high-powered CPU.


This test uses the same setup as the previous test but rather than outputting the video to 1080p same-resolution content, I am down sampling the result to a 480p DV Widescreen format DVD-ready video file.  Because we are down sampling the CPU will have a lot more work to do as the GPU does not directly handle all of the resolution conversion process directly. 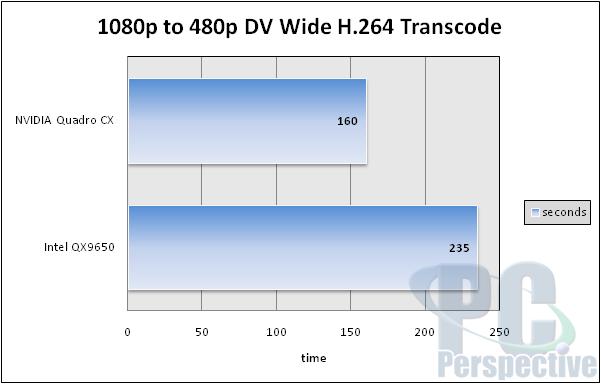 
The first thing I noticed here is that in both testing scenarios the CPU utilization is topped out – even with the Quadro CX and the Elemental RapiHD encoder at work the quad-core processor is being flexed to its tipping point.  The performance results still heavily favor the GPU-based encoder application though as it was able to pull out a 50% faster render time than the CPU alone.


This test uses a new content source in the form of a compilation of 1440x1080i HD camcorder video for an upcoming video review of the Apple MacBook Pro.  The video was then scaled slightly to a 720p H.264 format and then encoded using both the GPU and CPU methods. 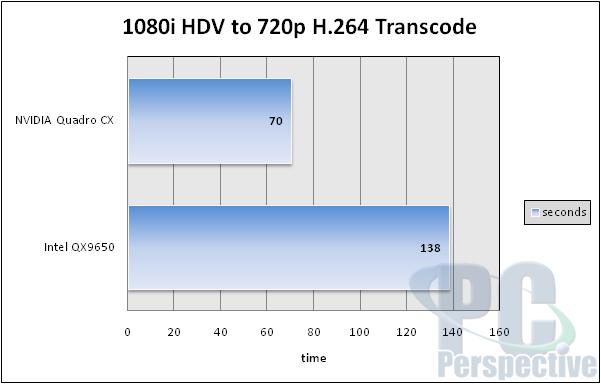 While we again see the CPU utilization for both GPU-enabled and CPU-only encoding maxed out, the performance of the RapiHD plug-in is impressive – there is a 97% decrease in total render time.


Our final test takes the same HDV source and time line but scales it up to 1080p for Blu-ray compatible exporting. 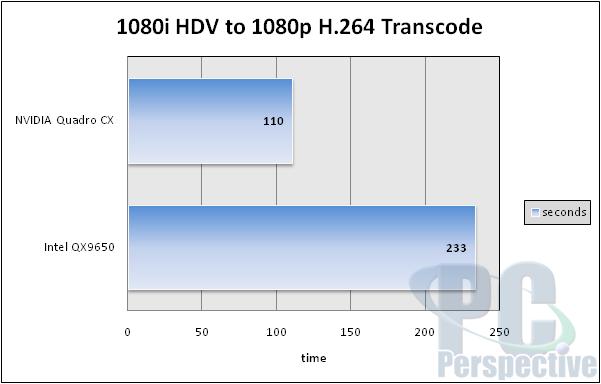 
The CPU utilization on the GPU-accelerated results is running about 70% and thus gives the system a little bit more flexibility than the CPU-based encoder.  And once again, the speed of the Quadro CX impresses: a 2.11x speed up over CPU-only performance results. 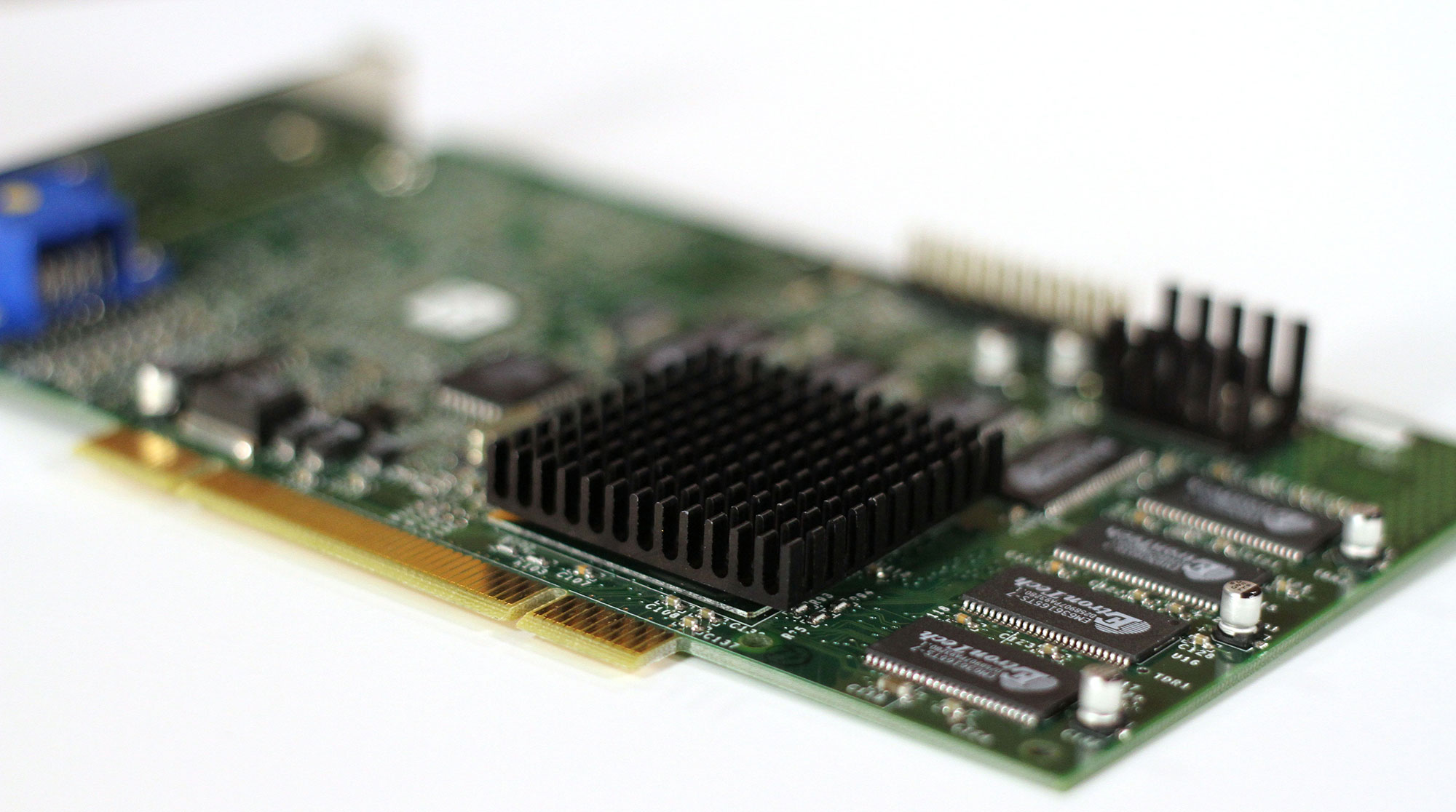