The NVIDIA Quadro CX is billed as “the accelerator for Adobe CS4 Suite” and it is in fact just that.  In nearly every respect in fact, the Quadro CX is identical in features and hardware to the Quadro FX 4800 graphics card with the exception of support for SDI output in Premiere Pro and After Effects as well as the RapiHD plug-in for video encoding.  Those added features are really what make the Quadro CX stand out from the crowd.

As for each Adobe application and how the Quadro CX actually enhances the experience, do the benefits warrant the cost of the card?

There are definitely some enticing performance and feature enhancements courtesy of the Quadro CX with more coming soon to Photoshop CS4.  Now that Adobe’s PixelBender application API is full, working order, and is completely capable of using the GPU for processing, we should see quite a few other plug-ins and the like start to pop up for Photoshop that take advantage of the GPU.  Some of the first example filters that come with the PixelBender demonstration are already available, and for free.  I plan on looking into these as we get further into our testing with GPGPU applications.

Another very important note about the Adobe Photoshop CS4 GPU acceleration: it works on nearly all graphics cards on the market today.  That’s right, though NVIDIA’s Quadro CX card is obviously more than capable of powering the OpenGL-based Photoshop CS4 acceleration, I was able to run these same tests using an NVIDIA GeForce GTX 260 reference card as well as an AMD Radeon HD 4870 512MB card.  The fact these enhancements to the Photoshop app were done in OpenGL necessitates that they are cross-platform and GPU independent.  Great news for consumers, not so great news for NVIDIA’s Quadro line of GPUs.  And yes, even the PixelBender-based filters will run on just about any modern OpenGL-supporting GPU.

While for Photoshop CS4 we showed off ‘pretty’ videos to demonstrate the changes and enhancements the GPU has made to the work flow, with Premiere CS4 the results are much easier to share and discuss as they are directly related to video encoding performance.  In my testing with the current revision of the Elemental RapiHD encoder, users will see approximately a 2x speed up across their H.264 encoding results versus a high-performance quad-core QX9650 processor.  Both NVIDIA and Elemental have stated that the goal is to actually achieve a 10x speed improvement with a few more updates and revisions to the RapiHD software – if they can do that then the product would likely be a best seller.

Speaking of selling, the RapiHD GPU-accelerated encoder is currently ONLY available with the purchase of the NVIDIA Quadro CX graphics card.  Unlike the Photoshop CS4 improvements we saw on the previous page, if you want the speed up in H.264 encoding acceleration through Premiere CS4 you are going to have to pay up.  A price of entry of $2000 for GPU-accelerated H.264 exporting might seem very high to a lot of readers but to professionals that depend on the software for their business, $2000 might be a small price to pay for getting back half of your usual render times. 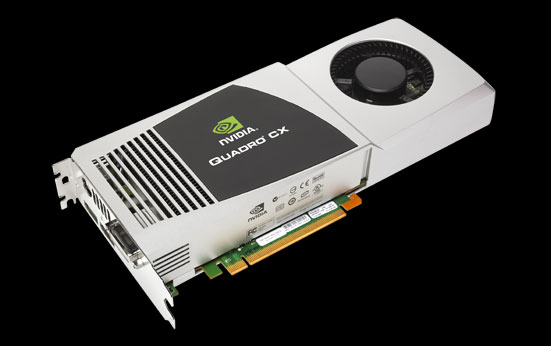 There is still the issue of output format support that is annoying for our RapiHD encoder – the software will only output H.264 video.  Just like the first version of Elemental’s desktop software counterpart, Badaboom, there is only a single output format and that can be rather limiting to users that do not necessarily want H.264 to run their professional lives.  Yes, it is likely that most video codecs will become H.264 capable very soon (even Flash 10 supports it) but that doesn’t mean we don’t want any options today.

After Effects CS4 is another Adobe Suite application that is accelerated by the GPU in some interesting ways.  I did not test this application for a couple of reasons: I am completely unfamiliar with it and do not have the background use to properly judge how the changes affect previous work flows and also it was difficult to show in low-resolution web video what was actually changing on the screen.

The primary benefit of OpenGL acceleration in After Effects is with the interactive Fast Previews on the time line where the user can alter values of effects or move the play head along the timeline quickly.  Certain visual effects like bilateral blur, depth of field and turbulent noise can be adjusted in such a way that the effects take place in real time with the video playback as opposed to in “steps” with traditional CPU-based work flows.  NVIDIA’s performance claims for After Effects are that performance can be increased in those above tests by a factor of 3x to 7x depending on your CPU source metric.

As of this writing, you can find the NVIDIA Quadro CX for sale for under $1800.  As I have stated several times in the article, while that may seem outrageous for your typical consumer-level card, professionals are more accustomed to the prices that Quadro name can draw.  Yes, the underlying GPU technology is very similar to that of the GeForce GTX 260, selling for under $300 today, but with the Quadro CX card you are getting a higher level of support along with the added features the Quadro line offers.

Oh, and yes, you can still play Crysis or Left 4 Dead on it.

When we first heard that GPU-acceleration was coming to the Adobe CS4 Suite of software we were really excited around PC Perspective.  This is by far the biggest name to hit the GPU compute scene since the technology’s inception and Adobe’s acceptance of it will likely spur the industry forward quite a bit in the month months and year.  The NVIDIA Quadro CX graphics card is a powerful addition to the CS4 line of software though it is only required for the use of the RapiHD video encoder plug-in for Premiere CS4; any modern OpenGL-ready graphics card (pretty much ALL of them) will accelerate the performance of Photoshop and After Effects CS4 as we showed and described.

It’s really hard to NOT be impressed by the upgrades to Adobe’s software and the work that NVIDIA and Elemental put into the RapiHD plug-in for Premiere Pro CS4.  Any professional user that depends on Adobe’s suite of software for their work will see a dramatic improvement in efficiency and productivity with GPU-acceleration and video pros will definitely enjoy the 2x speed up in H.264 encode times provided by the Quadro CX hardware.  I know for our use we’ll be putting this sample to good use in our upcoming video production work!