Now that the GeForce GTX 295 is officially being launched, we can tell you all about the features and performance we didn’t get to disclose during our preview posted a few weeks ago. This time we have added power consumption, Crysis and of course, Quad SLI testing!!

If you feel like you are having a case of ‘deja vu’ don’t worry, you probably aren’t alone.  While today is the official release of the GeForce GTX 295 graphics card from NVIDIA, and also the first day of CES 2009, we posted an early preview of the reference card from NVIDIA back in the middle of December.  A lot of the benchmarks you’ll see today were actually created for THAT article though this time around NVIDIA allowed us to go all out with our testing configurations so we have additional details like power consumption included and just because we could, Quad SLI testing.

To quote from the previous article on the setup for this new video card offering:
In the same lineage as the GeForce 9800 GX2 and 7950 GX2, this new card is in fact utilizing a pair of GT200-based GPUs on two PCBs all contained on a single dual-slot card.  The core of these GPUs is based on the GT200 architecture of course, though these new parts are first consumer cards to see the new 55nm cores on them.  (The underlying technology is the same though – see my first GT200 review for the full break down on this GPU’s inner-workings.) This was no doubt a requirement as getting a pair of the very hot and power hungry 65nm GT200s was a difficult task.  The specs on the new GTX 295 are impressive: What is interesting about these specs is the mix between GTX 260 and GTX 280 heritage.  The 480 stream processors indicate that the GTX 295 is basically a pair of GTX 280 GPUs (since the GTX 260s have either 192 SPs or 216 SPs depending on your place in time) on a single board while the clock rates are exactly like those reference clocks on the GTX 260 GPU.  Also, the 448-bit memory bus and 896MB of memory per core are also indicative of the GTX 260 product.  NVIDIA has obviously created a hybrid part here that properly balances GPU performance and power efficiency.

For our review of the GTX 295 BFG Technologies sent over its retail product for the release that, to no one’s surprise, looks quite a bit like the reference designed card we used in our preview.  The GTX 295 will definitely be a more limited-production part than other graphics cards and as such the ability to make custom designs for it will be very limited. 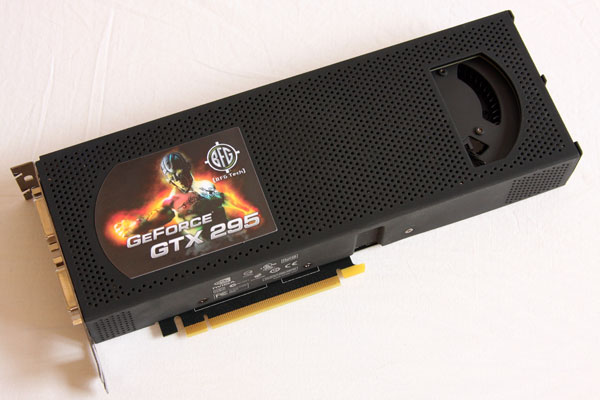 For this initial iteration of the BFG-branded GTX 295 the clock speeds are all reference – NVIDIA doesn’t like to see its partners push the limits of the technology or cooling solutions until the GPU (or in this case GPUs) have been in the market for some time to test stability on a wider scale. 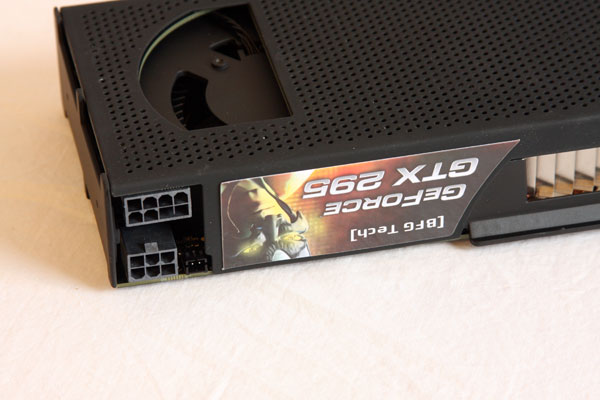 The GeForce GTX 295 requires an 8-pin and 6-pin power connection for to run so be sure your power supply has the correct connectors.  If not, the adapters that BFG includes in the box would likely help as long as you have the 600 watt power supply I recommend for the best performance. 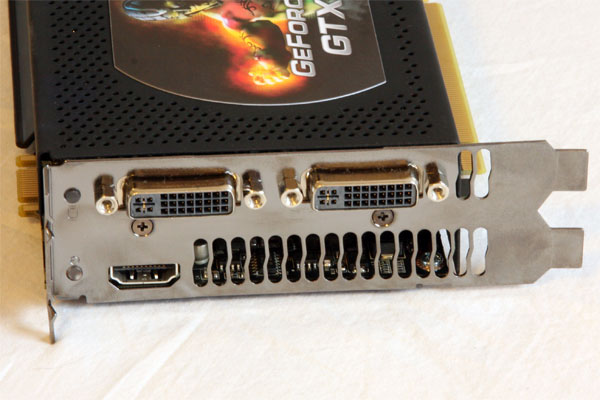 Two dual-link DVI connectors and a single HDMI connection grace the front panel of the BFG GTX 295 card along with a pair of lights that help to alert you to the status of the card.  A blue light lets you know you have the proper power connections attached and a green light indicates that at least one display was correctly attached. 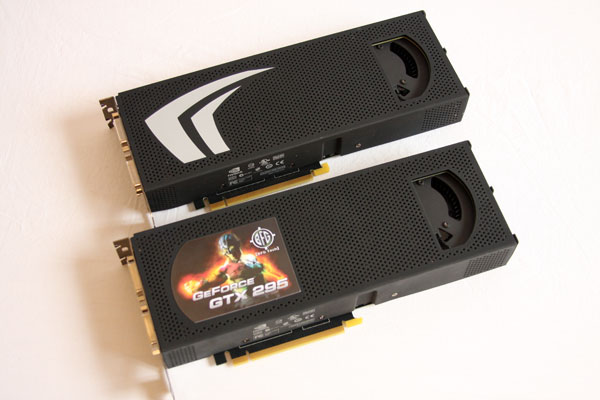 Now THIS is interesting – what should we do with a PAIR of these cards? Quad SLI you say… 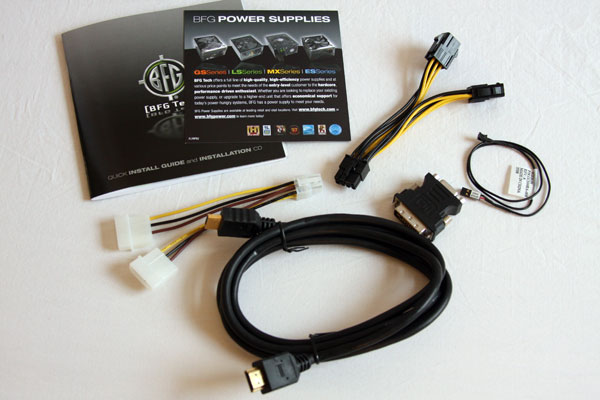 In the box from BFG you will get all of these above goodies with your new GTX 295 card: HDMI cable, digital audio cable for pass through to the graphics card from your sound system, 6pins to 8pin power adapter and more.