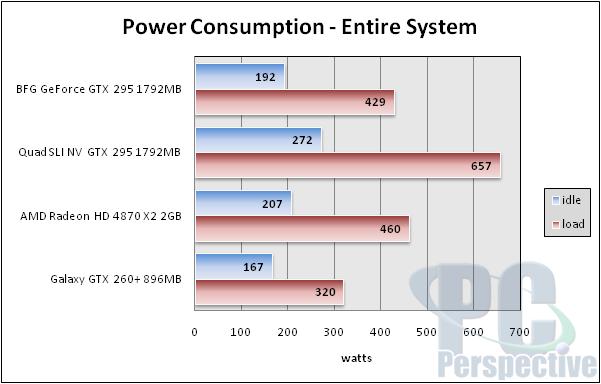 The power consumption results on the GeForce GTX 295 are actually very uplifting for NVIDIA as it clearly shows the single GTX 295 card using less power at both idle and load than the AMD Radeon HD 4870 X2.  Of course, the Quad SLI configuration is a different story as we see it consuming more than 650 watts of power during our load test indicating a 228 watt jump over a single card results.

The single card performance (though dual GPU of course) of the BFG GeForce GTX 295 1796MB solution was impressive and the new card easily takes the top spot as the best performing single slot graphics card available.  The Radeon HD 4870 X2 has FINALLY been unseated after a full five and half months as the king of the hill.  NVIDIA would have liked to have accomplished this feat earlier than this but I imagine they were forced to wait for their 55nm process move (from the 65nm that the GeForce GTX 280 and original 260 use) to fit inside the power envelope.

In my testing the GTX 295 was the leading card in Call of Duty: World at War, Crysis, Far Cry 2, Left 4 Dead and World in Conflict.  In some cases noticeable performance differences were only found at resolutions of 2048×1536 or higher so in some ways that could affect your purchasing decision if you have no desire to move on to a higher resolution panel any time in the future.  The range of performance deltas ranged from as little as 5% to as high as 25% in titles like Call of Duty and Far Cry 2.  I would call that a pretty decisive performance victory for NVIDIA’s new flagship part. 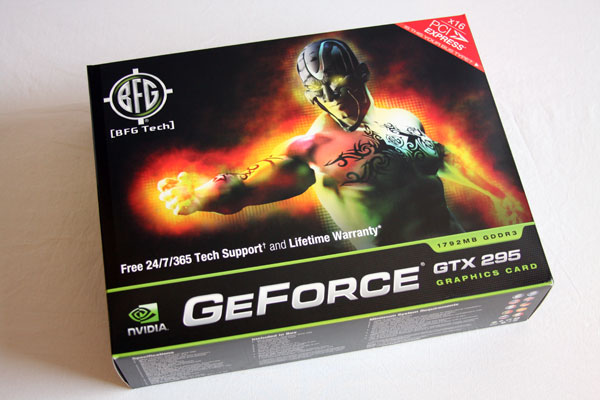 
Quad SLI performance was another matter entirely.  In communications with NVIDIA, the internal teams obviously saw much better scaling performance on gaming titles than I did with my Quad GPU testing.  With what I have seen, the BEST case scenario came with Crysis as it saw a 30% frame rate increase with a pair of GeForce GTX 295s versus performance with just a single card.  With Left 4 Dead though performance was consistently worse with a pair of cards in the system versus single card results.  This variability seems to be the norm at this point with Quad SLI.  It is quite possible that some drivers might fix this issue and increase scaling in a more broad sense but for now I have no choice but highly recommend against any sort of Quad SLI configurations with this part.  Luckily for you that type of computing power is really not necessary for today’s games.

Usually here I would tell you about the HDMI port and the set of dual-link DVI connections on the GTX 295 but in reality those are features that SHOULD be on your next GPU.  Instead I’ll use this space to talk about the kinds of technologies that NVIDIA has been pushing with their “Graphics Plus” campaign starting with CUDA, moving to PhysX and games like Mirror’s Edge, video transcoding application and even the new GeForce 3D Vision tech.  While not all users will immediately find the value in these additional features that NVIDIA GPUs provide, to many it will be the idea of “why not” that gets them to buy in.  If you can get a great gaming video card that COULD also run PhysX if you want to and also COULD run the Elemental Technologies Badaboom! transcoder application and COULD run the 3D gaming technology behind 3D Vision for GeForce then why not?

Another interesting product that NVIDIA has not exactly been quiet about is the GeForce GTX 285 – the updated, 55nm, single-GPU graphics card that will replace the GTX 280 later this month.  Prices, performance and all the regular data you want will be coming later in the week but several of NVIDIA’s partners have been showing off boxes and reference cards so I thought I would include a mention of it here.

Probably the best news about the GeForce GTX 295 1796MB graphics card is the price: coming in with an MSRP of $499 the new single-card gaming leader undercut the “previous” price of the Radeon HD 4870 X2 by at least $25 depending on where you shop.  This is a slightly unusual move for NVIDIA that is traditionally quite content to keep its prices higher as long as they have a better product.  Instead they chose to take the route AMD has taken over the past 12 months – offer a better product that is ALSO at a better price.

Unfortunately for NVIDIA, AMD is also taking the same route that NVIDIA took when AMD followed this strategy: just the day before this release AMD let the media and partners know that the price on the AMD Radeon HD 4870 X2 would be cut.  Now the card will be priced at $449 with an initial $50 rebate making the final price $399.  While rebates are annoyingly criminal (and why not just price the damn card at $399), the drop is great news for gamers as more choices at lower prices is ALWAYS a plus; you can thank competition for that.

The GTX 295 should be available at online retailers starting today!  We are certainly used to these hard product launches by now.

Even in a slightly slower economy (is there even anyone at CES?) I find the prospect of the BFG GeForce GTX 295 1796MB a positive move from the company.  The top-performing single graphics cards from both NVIDIA and AMD are now priced at near the same level($499 for NVIDIA’s GTX 295 and $449 for AMD’s HD 4870 X2); that is well below the $649 prices we had seen previous flagship parts launch at and goes to show us how seriously both sides are taking the decline in hardcore PC gaming sales.  NVIDIA is definitely the company that is “pushing” PC gaming forward again with technologies like CUDA, PhysX and GeForce 3D Vision, even if they are a bit over zealous at times about them.  I am not saying you should jump on the NVIDIA bandwagon because of that, but the extra features (that either will or could improve your gaming experience in the future) certainly aren’t going to hurt gamer morale.

The GeForce GTX 295 isn’t going to be in everyone’s price range but I can’t help but be impressed by the performance the card brings to the table for the money.  NVIDIA is back on top of the graphics world.