One of the keys for NVIDIA’s 3D Vision technology is that it works with existing game content.  You don’t have to be on the lookout for games with a special “3D-Ready” logo or anything like that – NVIDIA claims to have 350 games supported and verified to work with the 3D imaging methods ranging from StarCraft to Far Cry 2.

This is possible due to a terrific little nuance in 3D gaming where every object being displayed in the real-time 3D environment has depth information already associated with it.  It is this information that allows the rendering engine to decide what objects are in front of other objects so that pixels can be culled correctly and drawn only when necessary.  The new NVIDIA GeForce 3D Vision software essentially intercepts this DirectX data from the game and uses it to create two different images to be rendered to different eyes.  Based on the depth difference indicated in the game by these values, and by using the depth scroll wheel to adjust it by a common factor, the NVIDIA driver is able to correctly offset each individual object of the scene in a way to produce a very realistic 3D effect.

I know some NVIDIA engineers are already screaming at me for this gross oversimplification of the process, but at its core this is how I understand it.  Yes there some quirks in the algorithms that might not work with certain in game effects (smoke and fog in some cases) and so NVIDIA has tested a TON of titles and recommended the best IQ settings for you to use.  These very tips (something like “turn shadows to low”) appear once you start each title in the lower right corner to alert you to the changes recommended until you hit the hot key to remove them – a very nice feature that shows NVIDIA spent some time with end-user testing.

Software installation for the GeForce 3D Vision technology is really just about as simple as installing graphics card driver.  The in-box DVD includes a 3D-enabled version of the Detonator GPU driver and a 3D Vision software installer that walks you through the setup process for your display, the glasses, orientation and more. 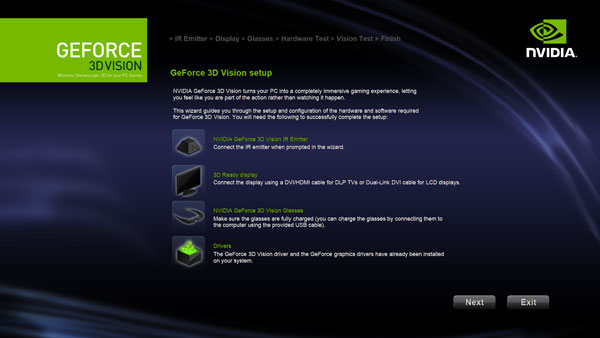 After installing the graphics card driver, you are met with this first screen of the 3D Vision software setup.  It is setup in a very wizard-like format that is easy to follow. 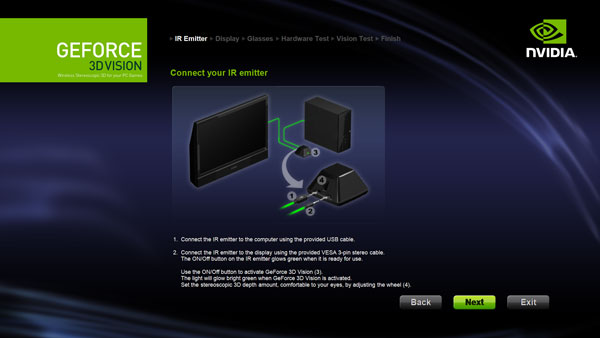 After it detects your display configuration of either a 120 Hz LCD or DLP TV, it will instruct you as to how to connect the IR transmitter, where it’s best to place it and the range the transmitter has (about 15 feet). 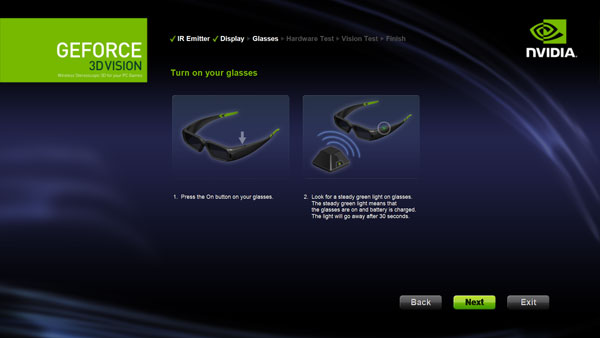 The next step is turn on your glasses. 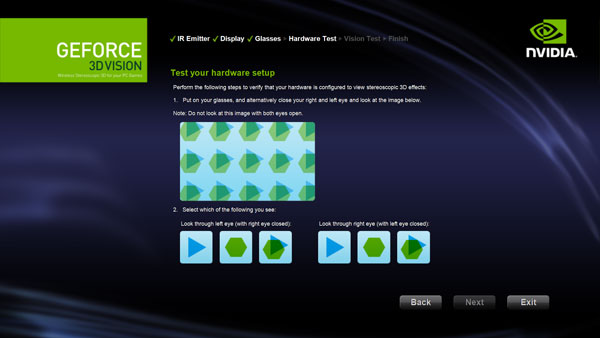 This is the first screen you’ll see that will actually put the glasses to work.  To help set the orientation of the lens-to-image mapping, you are instructed to close your right eye and indicate which shape you see, and then repeat the process for the right eye.  This makes sure your display is working correctly with the software as you should only see ONE of the shapes with one eye closed.  If you see a mix or both it will tell you your hardware is not compatible and point you to NVIDIA’s website for more information. 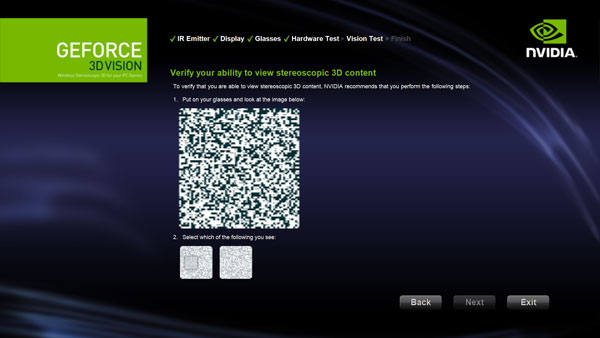 This final step of the setup process is actually a test for YOU, not the hardware.  There are a VERY small number of people that cannot see stereoscopic 3D due to a dominant eye disorder.  If you don’t see part of the black and white design standing out from the rest of it, then you aren’t physically able to see the effect.  (Don’t worry, on this screenshot NO ONE can see it correctly.)

After all the software is installed you will then have a new section in your NVIDIA Control Panel labeled as Stereoscopic 3D. 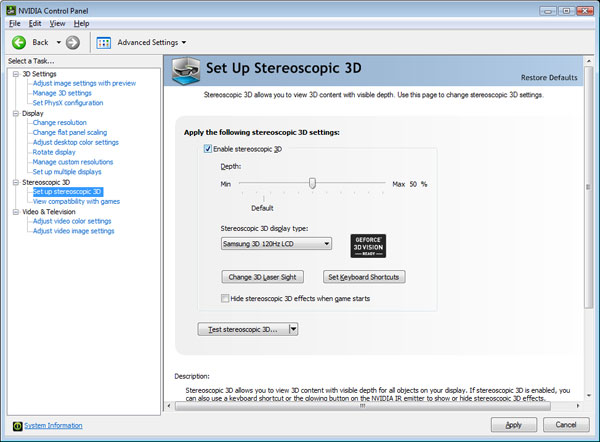 This driver panel will allow you to enable or disable the 3D effect completely though I would recommend leaving it on and using the IR transmitter button or hot keys to change its state.  You can manually adjust the settings that were created during the configuration wizard if you want to or just re-run the wizard.  You can then run the NVIDIA 3D test to see if your configuration is working: 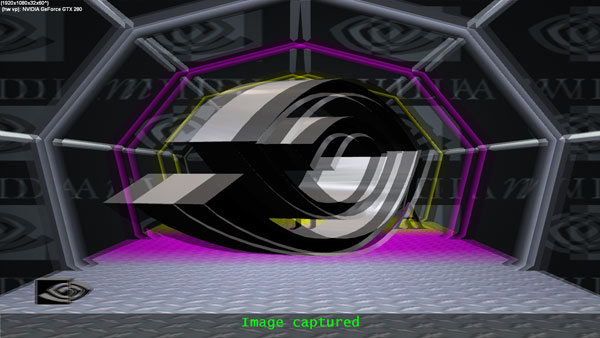 
The button for changing the 3D laser sight is used to address one problem that comes up when using existing game content with new stereoscopic 3D technology.  Often times, the 3D crosshair that is used in-game will appear to be much too close to the user or blurry as their eyes focus on everything else around them.  This option allows you to override that crosshair with one provided by the NVIDIA driver that is more compatible with stereo effects.  In my testing, I only used the NVIDIA provided crosshair while playing Call of Duty: World at War. 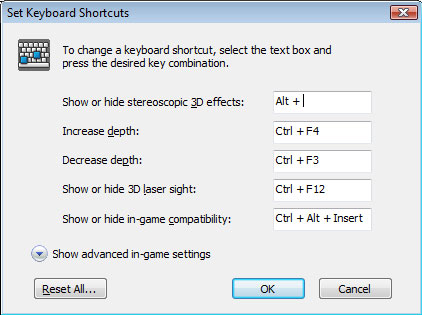 You can manually adjust the keyboard shortcuts/hotkeys for the stereo 3D features here.  It is nice of the software to allow you this kind of control without direct access to the IR transmitter (that may be sitting feet away on a DLP screen). 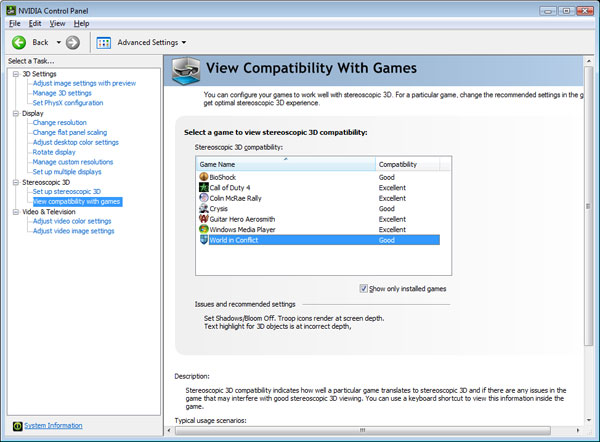 If you look in the game compatibility section of the driver panel you will see profiles and games that NVIDIA has tested with GeForce 3D Vision and any recommendations they have for in-game settings.  Here I am just showing installed games – useful to prevent scrolling through the hundreds included.  Besides getting a compatibility rating, something like “Good” or “Excellent”, you are given specific settings and options suggestions like “Set Shadows/Bloom off” that will provide you with the best stereo 3D experience.

In some cases, certain graphical features will “break” the 3D effects because they lack the basic Z-buffer information or are usually applied after depth is decided in the standard game rendering pipeline.  It is unfortunate that in some titles these kinds of effects have to be turned off (shadows for example are pretty key to games today) but NVIDIA is assuring us that they are working with developers to make sure that upcoming titles are as close to completely compatible with stereoscopic 3D as possible.  I should note that all of these in-game settings are on a case by case basis; some games don’t require any degradation in image quality.
Image and Video Viewer

In addition to the gaming aspect of GeForce 3D Vision, NVIDIA also provides a 3D image viewer and 3D video viewer application that can be used to view properly formatted material. 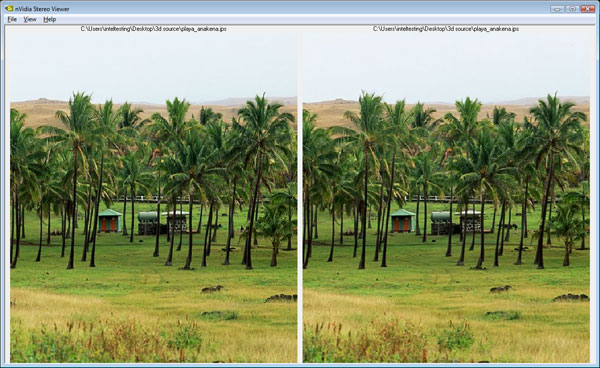 
Here you see the image viewer looking at a JPS file (common 3D image format) in the NVIDIA viewer application before the 3D effect is applied.  If you look very closely you will see that these two images are in fact just slightly offset of each other – the requirement for 3D stereo imagery. 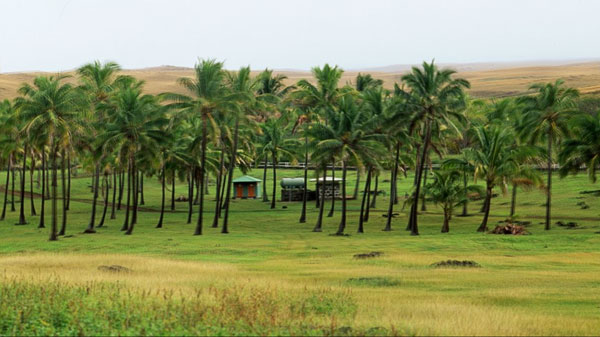 
Here you can see the result of enabling the 3D view of the image in all its blurry form since showing the effect online without the appropriate display or glasses is impossible.

The NVIDIA driver also allows you take your own 3D stereo screenshots from games like so: 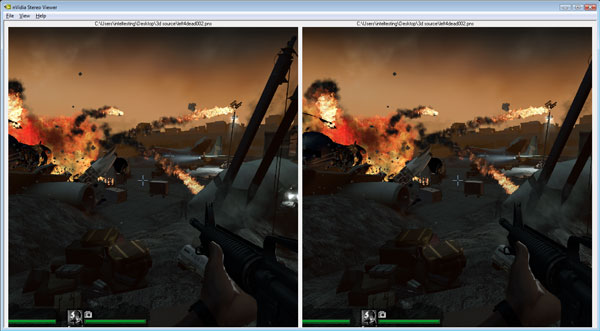 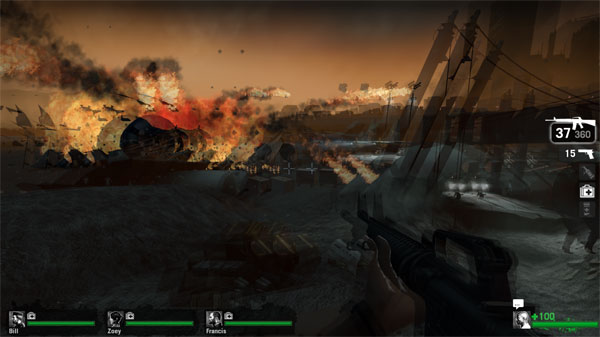 
The NVIDIA 3D Video Player works in the much the same way and requires specially built videos to work. 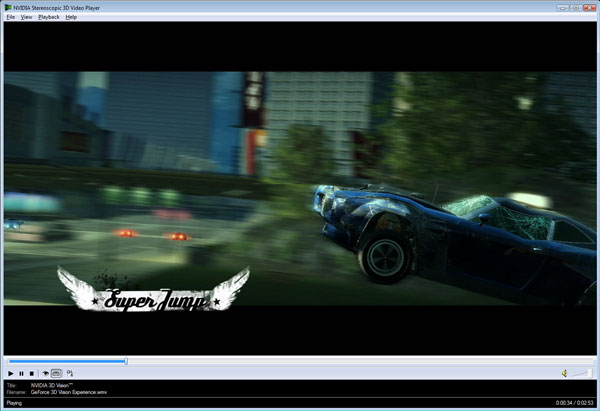 
When viewing the video in a windowed mode the image is only displayed in a 2D form (one eye is shown basically). 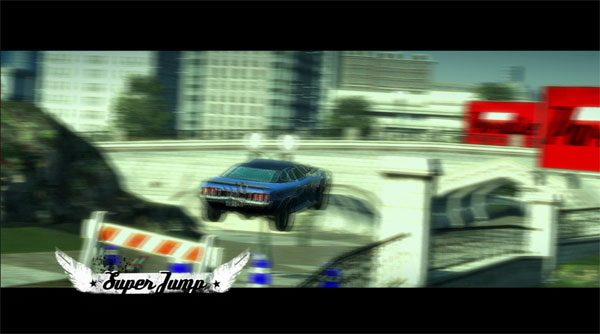 
Full screen mode gives us the full effect.  It’s notable that because this is a video rather than on-the-fly gaming, the depth adjustment does not work as the depth field is hard coded into the content. 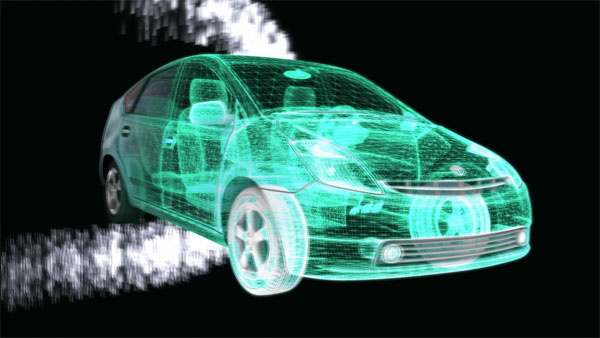 
Here is just another third-party created video at work.  I know, not much for you to see here without the technology in front of you, but we try.

Overall, I have to say I was pretty impressed with the work NVIDIA put into the software side of GeForce 3D Vision.  The driver and configuration wizards were pretty much flawless and the in-game cues for configuration were great little extras that proved they put this technology in consumers’ hands before finalizing it.