Every once in a long while, we are lucky enough to get a technology that forces us to reevaluate how evaluate computer hardware.  The introduction of multi-core processors was the last such event and I feel that stereoscopic 3D gaming is yet another.  With multi-core processors we were forced to move from purely synthetic benchmarks to a mix that included many real-world examples of software usage and even multitasking in order to properly evaluate how the new hardware would change the way we use our PCs.

With NVIDIA’s GeForce 3D Vision and stereoscopic 3D gaming in general, it is the EXPERIENCE of gaming that becomes the most important factor in our decision.  Yes, performance is still important, and you’ll see that we have provided some benchmarks that show how stereoscopic 3D features change the performance of your system.  But the real meat of the technology can’t be properly evaluated until you use it, use it often and then use it some more.  Does the effect lessen over time?  Does it strain your eyes?  Can you it play it for hours without getting fatigue?  Does it make the gaming experience better?  Is it enough of an improvement to warrant the cost?

What’s more is that even though I can and will answer these questions for you, this is really a product that requires direct interaction.  I can’t show you screenshots, videos or anything that will properly explain what you see when using the glasses for yourself. Imagine the headaches of NVIDIA’s marketing team as they try to market a technology that can’t be shown over any medium but itself.

But we’ll make do – we’ll have benchmarks, my personal experiences as well as the experiences of my friends to comment on.  Not only that, but I spent a few hours at my local Best Buy demonstrating the hardware and soliciting opinions about the experience and even cost.  I built up a quick video review of the technology that goes over the hardware and has a segment recorded at that Best Buy store to share those users’ reactions and comments.

Our testing hardware was pretty straight forward; I built a new Core i7-920 system with 6GB of Corsair DDR3-1600 memory and a Gigabyte EX58-UD5 motherboard.  While just about any NVIDIA GeForce 8-series and above graphics card is compatible with the 3D Vision kit, I went with a GeForce GTX 280 1GB card just to get optimal performance.

In order to get the best all-around view of the 3D Vision technology I wanted to test the hardware on both a 120 Hz LCD monitor and a 1080p DLP TV.  NVIDIA sent along the Samsung SyncMaster 2233RZ 120 Hz display with the 3D Vision kit and I took it upon myself to head out to my local Best Buy and pick up a Mitsubishi 60-in WD-60735 3D-Ready DLP television. 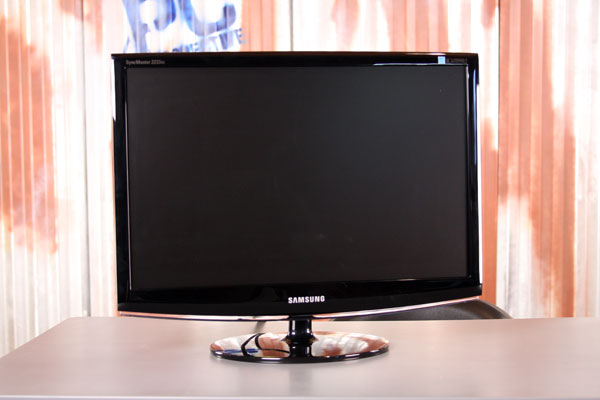 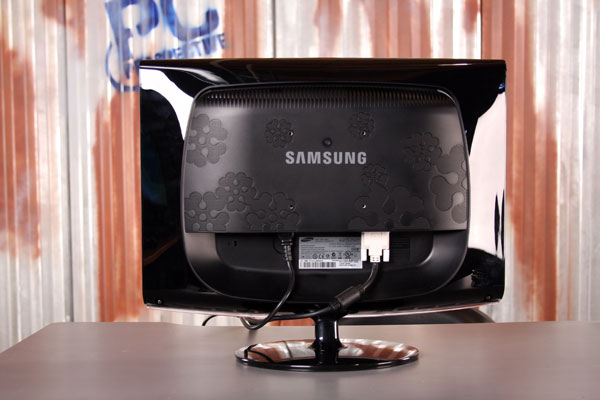 The Samsung 2233RZ is a nice looking monitor that also has a hell of a 2D mode to go with the 120 Hz 3D support it offers.  Estimated retail pricing on this monitor is about $399 which is pretty high for this SIZE monitor but no other 22-in screens are going to offer 120 Hz refresh rates and 3D gaming support.  We haven’t yet gotten our hands on the new Viewsonic VX2265wm that NVIDIA is also supporting with 3D Vision. 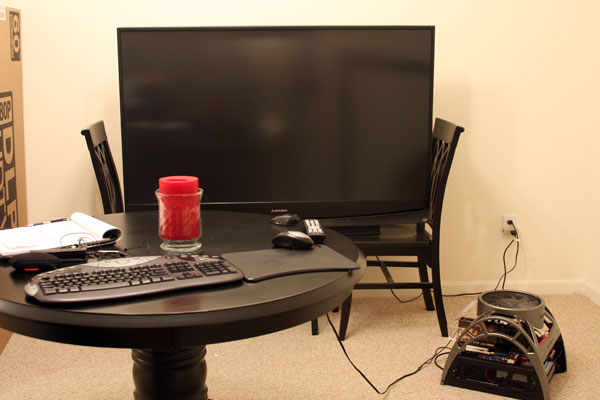 Here you can see our spare room converted into a 3D Gaming Mecca.  Take one 60” 1080p DLP TV from Mitsubishi, add on Antec Skeleton chassis with a Core i7 gaming rig and sprinkle on some GeForce 3D Vision technology and there you have it: PC gaming goodness.  Yes those are chairs acting as a temporary DLP TV stand and yes that candle was placed there by my wife to spruce up the shot.