NVIDIA had some Ion platforms on display at CES 2009 last week and we had the chance to talk with the company about their goals for the project. We also have some of the first benchmarks of the palm-sized-PC courtesy of NVIDIA as well.

When news first began to find its way out about the NVIDIA Ion platform, it was very obvious that NVIDIA was looking for anyone that would listen.  The company was desperately telling the world that their chipset and in-house designed platform solution was the perfect mixture of performance and power consumption for that new breed of computer known as the netbook.

The product that NVIDIA is pimping is actually nothing new: it is really the GeForce 9300M mobility chipset that we have seen in the Apple MacBook computers and the desktop variant can be found on various Intel Core 2 motherboards.  Paired with this chipset is an Intel Atom processor core that allows Ion to consume miniscule amounts of power with modest base computing power.  Currently now Atom platform uses any chipset other than the Intel 945 chipset (or equivalent) and NVIDIA is trying to market its way into what is essentially a closed platform.

NVIDIA wants to see its product in more segments, broken down as follows:

You can see the company has lofty goals for this product and it is likely a big part of NVIDIA strategy going forward in order to sustain growth in a world where super-high-powered GPUs are becoming less relevant.  While the netbooks argument is pretty basic, the notebook section above is more interesting.  Essentially, NVIDIA is saying that companies that choose to use the Intel Atom processor in conjunction with the NVIDIA Ion platform can save as much as 80% on the CPU cost rather than going with an Intel Core CPU and still get high quality graphics and computing performance.  For Nettops and All-in-one designs NVIDIA claims that with the Ion platform and Atom processor OEMs could design new products that offer great performance but in new designs previously requiring larger spaces.

During CES we had a chance to get our hands on the Ion platform and you can see a short video here but with some much better quality images right after: 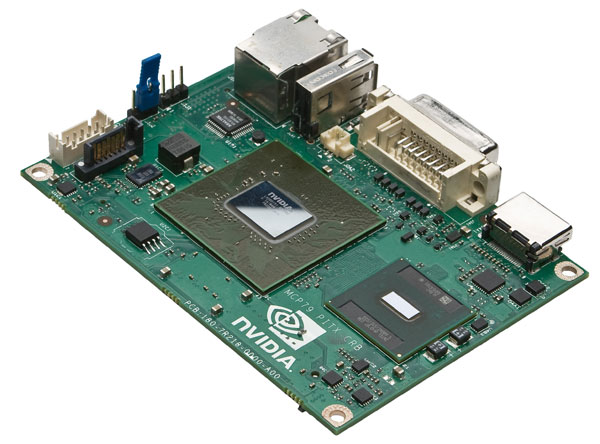 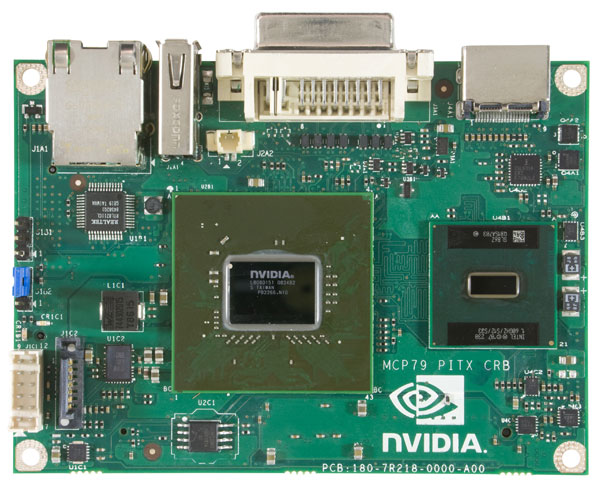 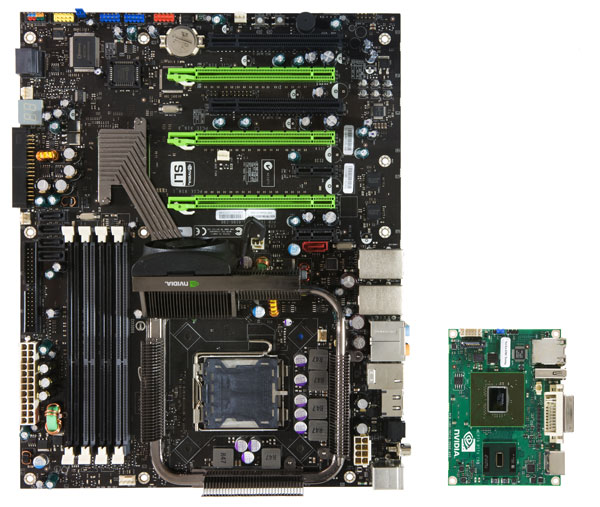 Sorry for the somewhat blurry video, but the next three images should go a long way towards clarifying the details.  It’s tiny!  The two chips you see on the board are the GeForce 9300M mobility GPU (larger) and the Intel Atom processor (tiny in comparison).  The board will have a riser card to expand on its connectivity features but even at this stage it includes HDMI, DVI, USB and Ethernet.

When comparing it to an NVIDIA 790i SLI motherboard you can easily see how the possibilities for system design increase with the Ion platform, or any pico-ITX design.

All the cool kids have them