Intel had a press and analyst meeting today to go over its newest roadmap and the changes it has seen courtesy of the economy and a ramping up of 32nm process technology. We got to see some more specifics on the first CPU with integrated graphics, a six-core Nehalem processor for 2010 and plans for mobility and mainstream markets in 2009. 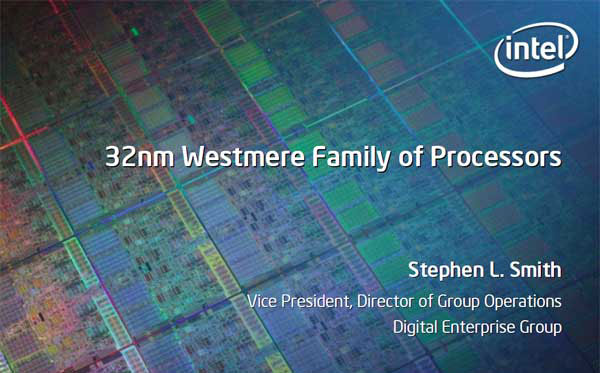 Today Intel had a press conference detailing for the media and analyst community the company’s plan for advancing the ramp up of 32nm processors and basically skipping some new 45nm chips that were supposed to be released this year.  The news of the Havendale’s demise was originally posted on PC Perspective last Monday. 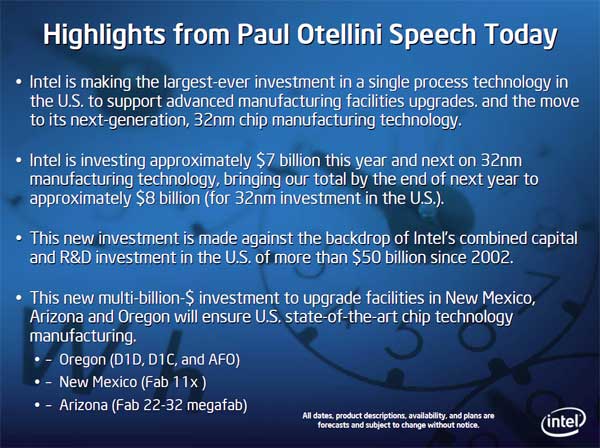 While in Washington, Intel’s CEO gave a speech that highlighted, among other things, the investment that Intel was going to be making in state-side R&D and manufacturing.  A total of $7 billion will be spent over the next two years upgrading fabrication facilities for support of 32nm process technologies. 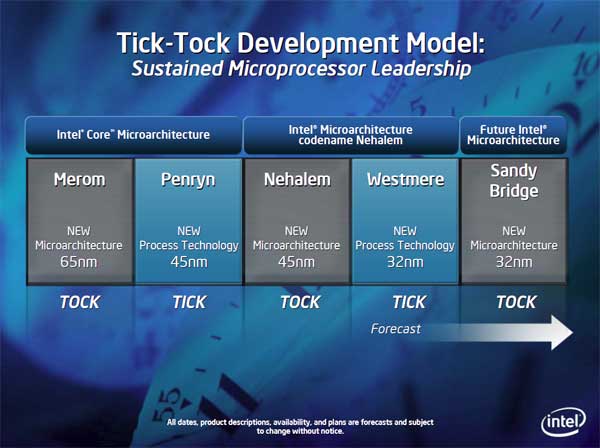 This very familiar slide shows the continued trend Intel has been on with a “tick/tock” model of design and manufacturing upgrades.  The “tock” implements a new microarchitecture design, as we saw with the current Core i7 Nehalem-based products, while the “tick” is a transition in process technology with only modest architectural changes. 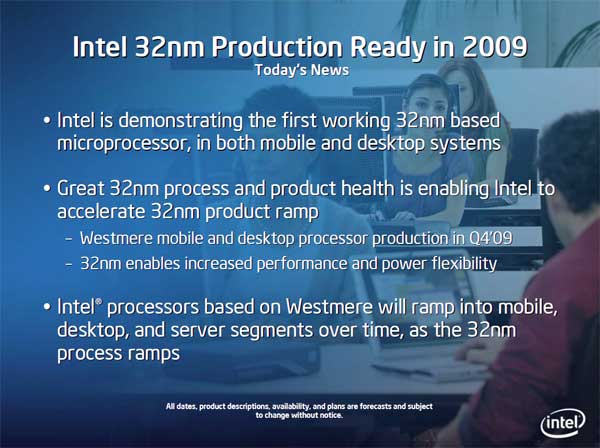 If you were live at the press conference (which we were not) you could see the first 32nm production CPUs from Intel up and running in both mobile and desktop systems.  Intel is claiming that the reason for this sudden emphasis on the 32nm technology is because the process is “healthy” – I would wager it has just as much do with the slow economy and not wanting to devote any more resources to 45nm production since demand is going to be low for the foreseeable future.  Investing in 32nm technology allows Intel to be more forward looking. 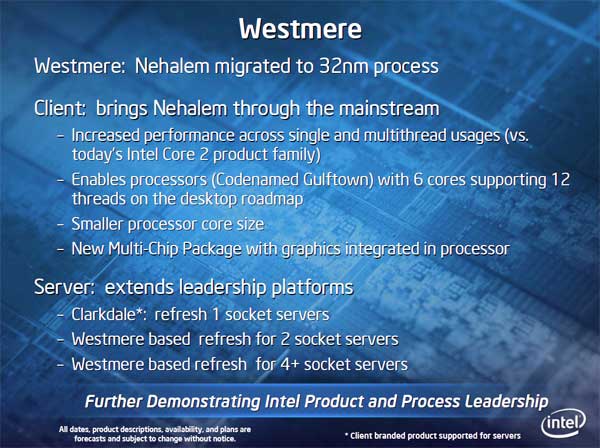 At its heart, Westmere is the Nehalem architecture migrated from the 45nm process it is built on now to the 32nm process Intel is currently ramping up.  You will likely remember than Intel has plans to bring Nehalem to the mainstream market on 45nm process technology, and that is still the case.

The move to 32nm does bring about some benefits for the architecture though, including the ability to support up to 6 cores/12 threads with the Gulftown design as well as the multi-chip packages that allow for integrated graphics on the CPU. 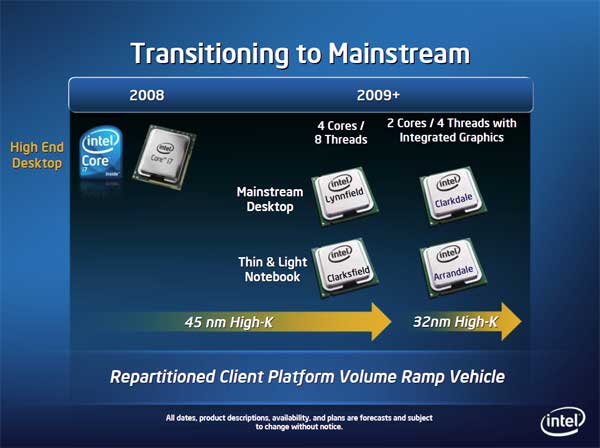 There are still a couple of products based on the 45nm process due out this year including the Lynnfield and Clarksfield CPUs that will be the first to bring the Nehalem architecture to more than just the high-end computer market.  Both of these parts will feature quad-core designs with 8 threads and both will be the first to integrate PCI Express into the CPU, coupled with the memory controller, thus basically eliminating the need for a traditional north bridge chipset.  The 5-series chipsets will now essentially be I/O hubs and connect to the processor through DMI connections rather than Intel’s newer QPI interface. 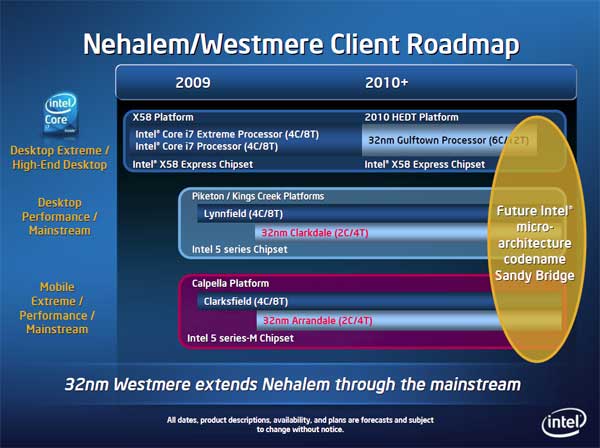 This slide gives us a good overview of what to expect for the client computing market with Intel processors.  The high-end desktop platforms will continue to utilize the X58 chipset well into 2010 and will be the only CPUs using QPI outside the server world.  Note that the six-core Nehalem design isn’t slated to be in production until 2010.

The rest of the desktop market will be fed by Lynnfield sometime in 2009 and then will be supplemented by Clarksdale (not to be confused with Clarksfield, ugh) based on the 32nm technology.  Clarksdale utilizes a pair of Nehalem-architecture cores (4 threads total) as well the first integrated graphics on the same substrate.

The mobile market will see a similar movement: starting with quad-core Clarksfield CPUs on the Calpella platform and then supplemented by the dual-core Arrandale CPU with integrated graphics. 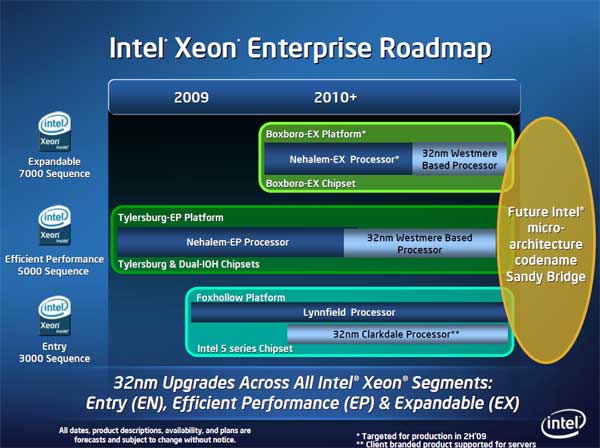 The enterprise market will see a somewhat different transition process though that looks to include a replacement policy rather than supplementing existing parts with 32nm CPUs.  The exception is of course the entry level Xeon lineup that is more or less a rebranding of the desktop lineup of products. 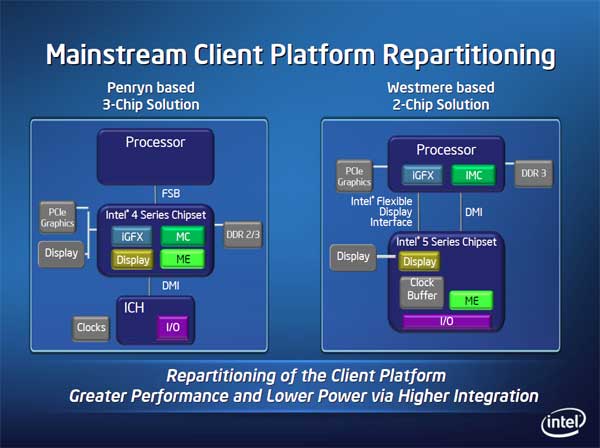 Here Intel gives us an example of how the platform of a PC has dramatically shifted from the days of the Penryn processor to the upcoming release of the Westmere 32nm product.  The majority of the functionality of the north bridge in the 4-series of chipsets has been migrated to the CPU directly with Westmere 2-chip offerings including integrated graphics, PCI Express connections and the memory controller.

The upcoming 5-series of chipsets for this platform will now be a single chip and will include the I/O (SATA, USB, etc) as well as the display output for the processors integrated graphics technology and other minor things like the clock buffer and ME (management engine for vPro). 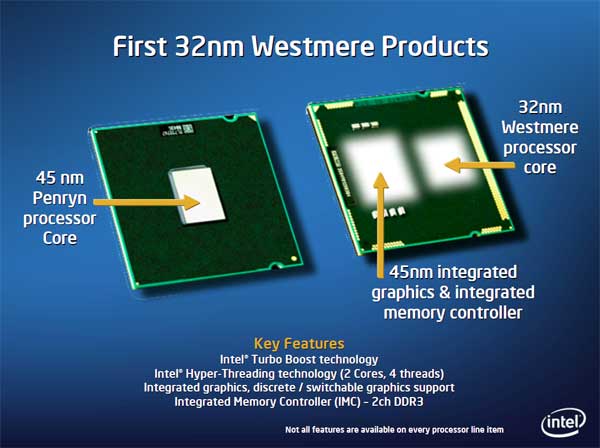 This slide shows the design of the first 32nm Westmere product that uses two physical chips on a single substrate – the processor cores are built on the 32nm process technology while the graphics and memory controller are built on the current 45nm technology.  While it might seem odd to see a mix of both 32nm and 45nm products on the same chip, we should note that the graphics chip is actually seeing a drop from 65nm to 45nm process.

Intel in fact is claiming that this move from 65nm to 45nm technology will actually give the integrated graphics a “significant boost” in performance though they would not get into specifics of how much faster or how exactly the transition affects GPU performance.

While Intel could build all of these components on the same die, creating a design like this gives Intel flexibility with manufacturing (and time to market) and product design.  During the meeting Intel already told us that a plan to move the GPU and IMC to 32nm technology is already in the works and that making that change with this multi-chip design would be much simpler than a completely integrated design. 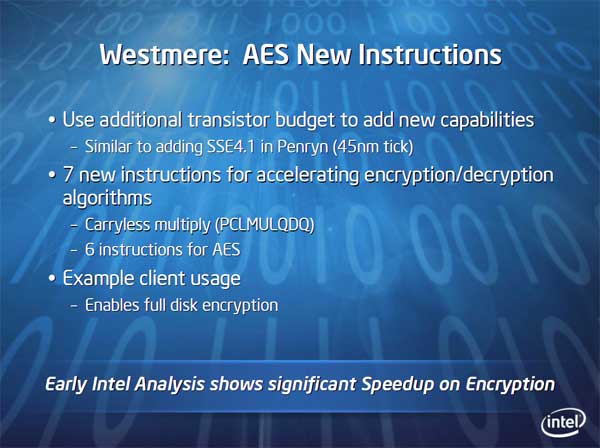 Advanced Encryption Standards now get a performance boost with Westmere-based products as Intel is introducing new instructions that will accelerate the technology. 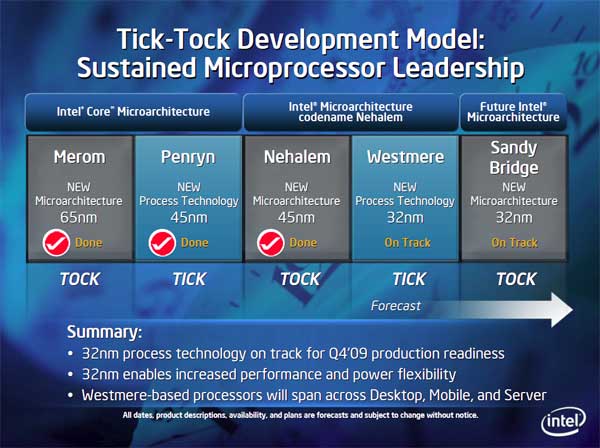 Intel would like to conclude its phone call with this message: everything is JUUUSSTTT fine, thanks. 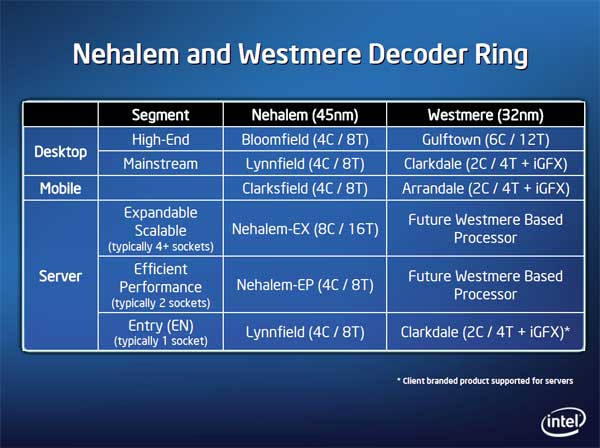 This is perhaps the coolest slide I have ever seen from Intel; not only because it has incredibly useful information in a very concise presentation but also because it uses the term “decoder ring.” 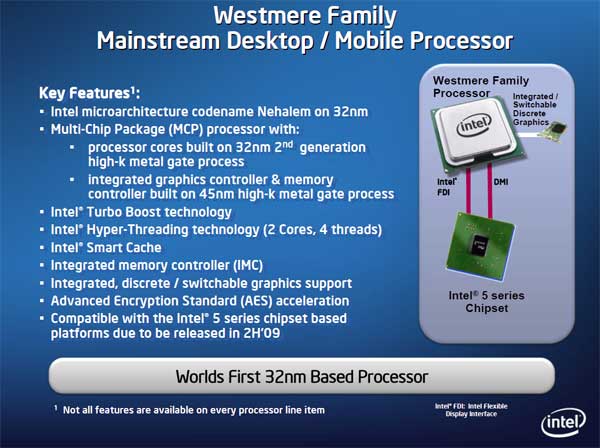 Finally, this slide summarizes the new processor that will be introduced and built by Intel late in 2009 – the dual-core/four-thread and integrated graphics chip we know as “Clarkdale” or “Arrandale” based on the decoder ring above.

Intel’s press conference today was definitely a mixture of good news and veiled bad news.  Several questions were asked about what actually happened with Havendale and other 45nm variants and the line was consistently that they were “reprioritized”; which according to FireFox isn’t even a real word.  No one wants to admit that something was “cancelled” because that brings about visions of someone at Intel being completely wrong.  The truth is that markets change, demands change and as such Intel’s roadmap needed to be adjusted accordingly.

Intel still plans to be in production of 32nm Westmere parts (Clarksdale and Arrandale) in Q4 of this year though they wouldn’t go as far as to say that systems based on these designs would be available before the end of the year.  This “reprioritization” that Intel is making is essentially moving up the range of products based on the 32nm technology and how quickly the ramp to that process node will accelerate.  And all of these moves will be powered courtesy of the $7 billion investment that Intel is making in state-side fab facilities.

Overall, the impression that I get from this meeting was that 2009 will be a somewhat slower than expected year in terms of new product releases but that Intel has confidence that 2010 will bring some change to our economy; it is hedging $7 billion, and its entire roadmap, on that fact.