Intel is finally bringing the low-cost PC world a dual-core version of the wildly popular Atom processor with the Atom 330. The CPU runs at 1.6 GHz and sports a pair of cores that both support HyperThreading for a total of four threads of computing. Will the Atom 330 revolutionize the performance levels of netbooks?

Earlier in the week I wrote up a review of the NVIDIA ION reference platform that consisted of an Intel Atom processor and NVIDIA GeForce 9400M chipset/GPU.  The goal of that platform was to change the way the industry and end users treat the world of netbooks and small form factor PCs by offering a level of graphical and video playback performance not seen in that size before.

What was more surprising was what we found under the hood of the ION reference design that NVIDIA sent us – a dual-core Atom 330 processor that we have yet to see in any other products to date.  While all current generation Atom CPUs from Intel are single-core HyperThreaded designs, the Atom 330 has two physical dies on one CPU substrate, each of which is HyperThreaded for a total of 4 threads of CPU power.

Obviously this was quite a surprise to find – we knew that dual-core Atom parts were coming but I didn’t really think I’d find them inside an unofficial reference design from a currently unsupported partner of Intel’s Atom CPU.  I wanted to throw some benchmarks at the new dual-core version right away to see how performance has increased on it with the additional horsepower especially in comparison to the impressive, but never well adopted VIA Nano processor.  When I published my review of the VIA Nano and Intel Atom processors in July of 2008, the chips were both very new and designs for either were just barely trickling out.

What we found was that the VIA Nano CPU was far and away a better overall performer though it did use a bit more power to get those results.  The Atom CPU fell behind in both integer and floating point math operations, much more in floating point though, making it particularly sluggish in media-based applications.  So now, I am curious to see if doubling up on the CPU cores for the Intel Atom is enough to take the performance lead, as well as the implementation lead.

As I mentioned above, the Intel Atom 330 dual-core processor we are testing and evaluating was found on the NVIDIA ION platform reference motherboard shown below. 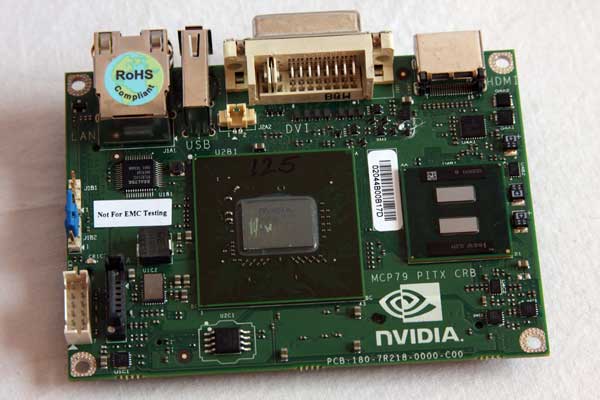 On the right you will clearly see the two separate cores that make up the Atom 330 processor and how they compare in size to the much larger NVIDIA GeForce 9400M chipset to the left of it.  For sense of scale with the rest of the world, here is a photo of a single core Atom processor (the Atom 230 actually) on an Intel motherboard: 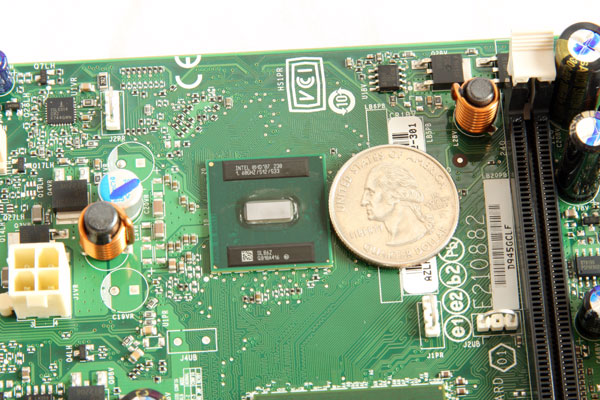 For sense of scale with the rest of the world, here is a photo of a single core Atom processor (the Atom 230 actually) on an Intel motherboard. 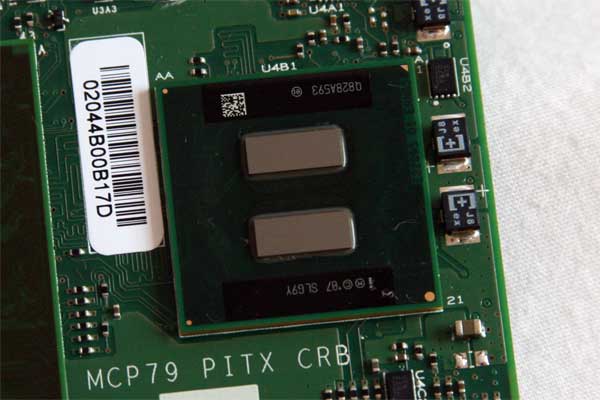 The dual-core derivative is simply a pair of the Atom dies placed on the same substrate and communicate through arbitration of the FSB – just as the initial dual-core CPUs from Intel.  The Atom 330 still runs at a 533 MHz FSB and is clocked at 1.6 GHz.  Both cores are built on the same 45nm production process that current single core CPUs are built on and each consists of about 50 million transistors each; that means both of these cores are about 1/7th the size of an Intel Core i7 die.