I used two systems for the benchmarks, one Intel based and the other AMD based.  The Intel system was comprised of the Core 2 Duo E8500 running on an X38 motherboard.  The motherboard is a bit higher end than the AMD 790GX board we ran against it, but overall the features were quite similar.  Both are CrossFire capable, and have the same kind of connectivity options in terms of SATA, Firewire, Gig-E Ethernet, etc.

All other components that were used are identical.  The systems were reformatted with Windows Vista 64 Ultimate and all updates applied.  DirectX 10 was also updated to the latest version.  Catalyst 9.1 drivers were used for the video portion.

The latest version of SiSoft Sandra is coded to leverage all those extra cores that most modern processors posses.  It utilizes processor “extras” such as SSE4 to give the best results possible considering how modern software applications address these latest processors. 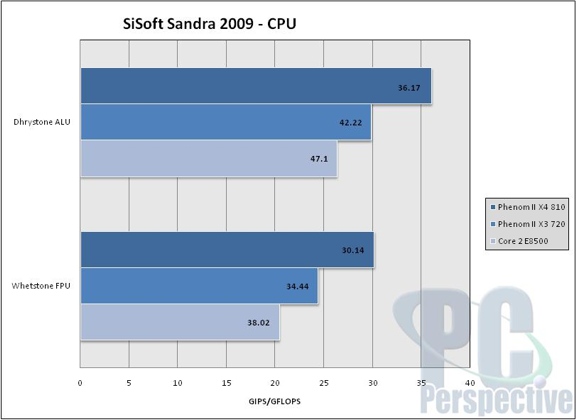 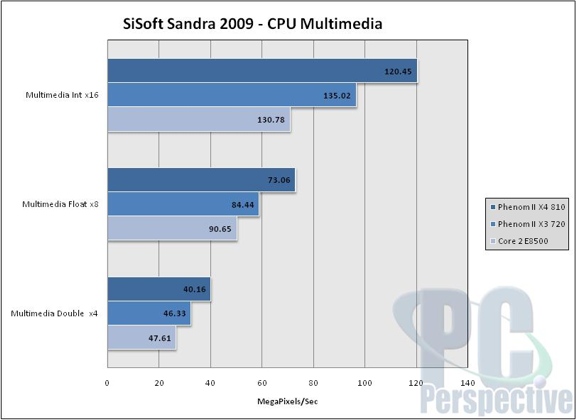 The quad core product is of course the highest performing in these synthetic benchmarks, while the faster clocked X3 certainly does not underperform. The E8500 makes a very good showing here due to its nearly 3.2 GHz clockspeed and higher IPC as compared to the Phenom II.  Still, there is no replacement for displacement, and the extra cores make a big difference. 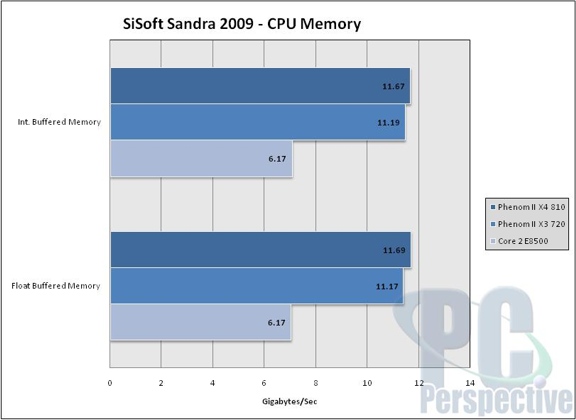 The DDR-2 memory controller on the Phenom II chips is about as optimized as one can get.  Running DDR-2 1066 speeds with tight timings allows these chips to exceed 11 GB/sec of bandwidth.  While it is not quite at the theoretical 17 GB/sec that dual channel DDR-2 1066 promises, it does get close enough.  The E8500 still runs on a FSB and does not have an integrated memory controller, so it relies on large L2 caches and a lot of prefetch to perform at the level it does. 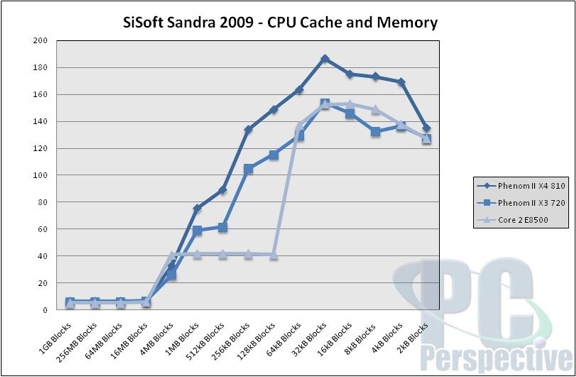 AMD has really improved the internal communications with the Phenom II, and even though it is at a lower clockspeed it matches the Intel part very well.  The previous Phenom and Athlon X2s could not say the same thing.

3D Mark Vantage is much better than previous versions of differentiating GPU performance vs. CPU performance. 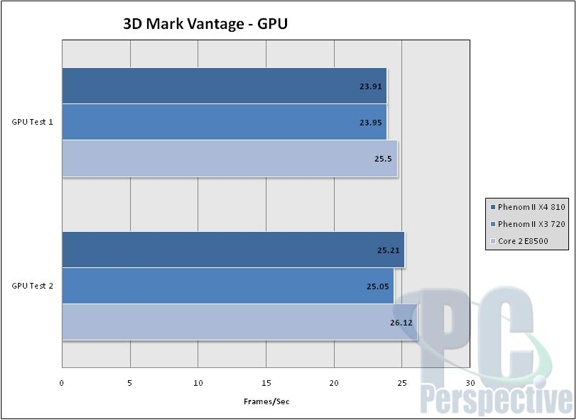 In GPU situations, the Intel part does pull slightly ahead in performance.  Perhaps this is what they mean by “a gaming processor”?  Considering the single thread nature of most games and the E8500’s clockspeed advantage, this is probably not a surprise. 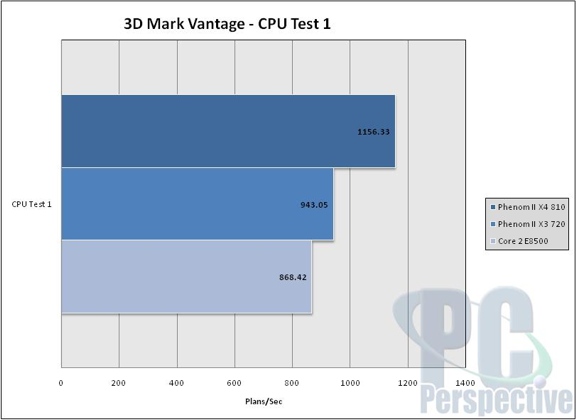 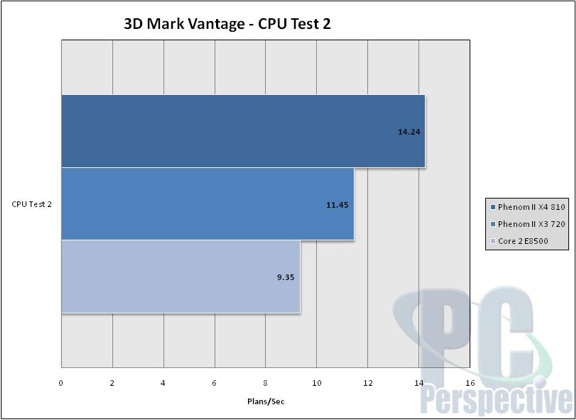 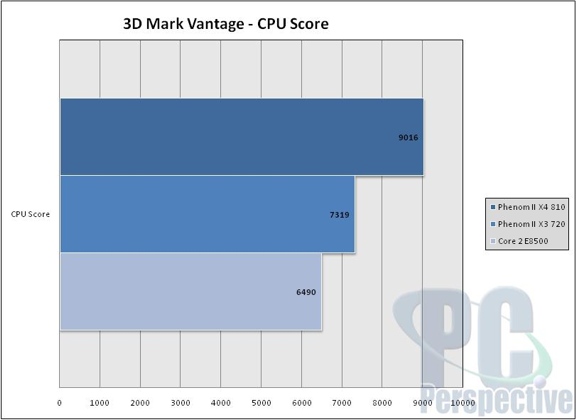 Once we get into the CPU bound tests the change is pretty dramatic.  The extra cores on the X3 and X4 are put to good use and give the E8500 a whallop.

This benchmark tests a whole host of applications that would be considered “common usage” by a good portion of users.  The whole thing takes about 1.5 hours to run, but it is pretty thorough in what it does. 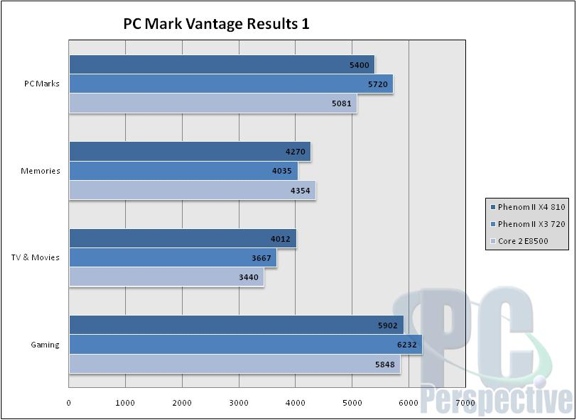 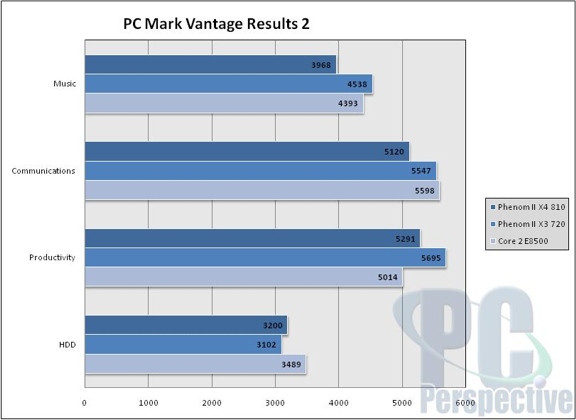 Nothing terribly exciting here.  Each processor has strengths and weaknesses, but the X3 720 takes the overall crown.  One extra core over the E8500, and 200 MHz of clockspeed and 2 extra MB of L2 cache seem to make it a pretty impressive part in this benchmark.

This classic rendering benchmark is able to show OpenGL performance as well as single and multi-threaded results in a pure CPU rendering situation. 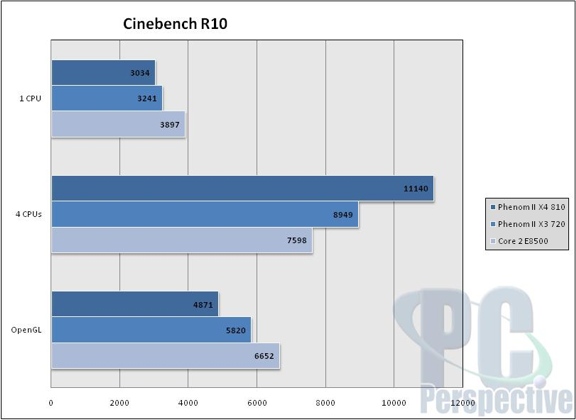 We again see the clockspeed and IPC advantage that the Core 2 architecture has over the Phenom IIs in this test, but once the max amount of threads available become used the Phenoms outperform the E8500 by a wide margin.  The OpenGL results still confuse me, as I used the same video card and drivers in each test bed.