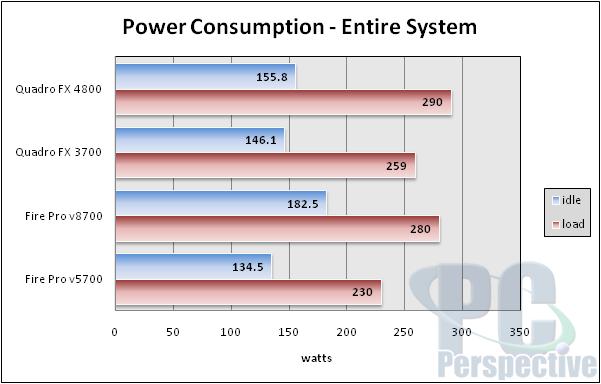 Though not usually as important for professionals using workstation class machines, power consumption is still a factor in the overall success of any graphics card.  In our testing the Quadro FX 4800 and 3700 used noticeably less power at idle than the AMD FirePro v8700; the v5700 was the lightest of all on power though at 134.5 watts.  When under a full load, the FX 4800 pulled the most of amount of juice – just about 10 watts more than the AMD offering.  And again, the FirePro v5700 used the least power of them all.

Evaluating performance of professional-level graphics cards like this really comes down to an application-by-application basis.  The OpenGL implementation for Cinema 4D used by Maxon in the CineBench 10 benchmark, for example, obviously favors AMD’s FirePro architecture as even the low-cost v5700 was able to best the top Quadro FX 4800 from NVIDIA.

Running the latest SPECapc benchmark on the 2009 version of 3d studio max however clearly showed NVIDIA’s Quadro architecture to be the most prolific.  In this case the lower cost FX 3700 card from NVIDIA was able to beat the more expensive FirePro v8700 GPU with twice as much on-board memory.

The SPECviewperf 10 results are obviously mixed between the two product lines and in fact, in some cases, it seems that all four of the cards we tested today have their own justifiable location in the product stack.  I would give the edge firmly to NVIDIA’s Quadro line of GPUs in four of the eight tests: CATIA-02, ENSIGHT-03, PROE-04 and SW-01; AMD gets the seal of approval on just two: TCVIS-01 and UGNX-01.  The remaining pair I would consider a split.  All this adds up to an edge for NVIDIA’s Quadro line over the AMD FirePro, unless of course you have a focus on the applications used in the two benchmarks AMD excelled at (UGS Teamcenter and UGX NX).

When it comes to physical features, the AMD FirePro cards have the advantage here since even the low-cost v5700 model sports three display connections including a pair of DisplayPort…ports.  Only the Quadro FX 4800 matches that while the FX 3700 comes with a pair of dual-link DVI outputs.  If you plan on using stereoscopic technology for your work, the Quadro series cards do have support for that built RIGHT into the back of the card which is nice.  Both series’ of card support multi-GPU technology and both support HDMI output if you need that as well. 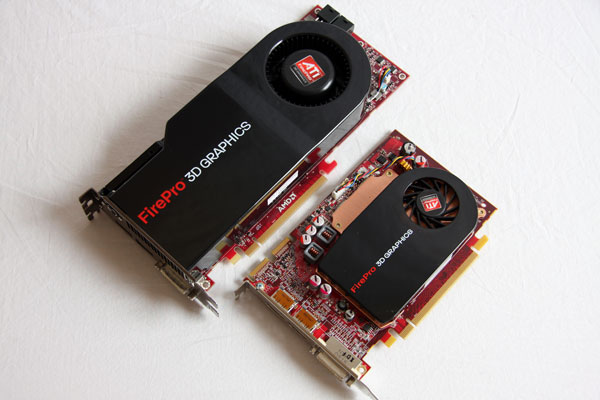 On a side note, I was curious to find out if the Quadro cards would support the 3D Vision technology released for consumers early this year.  It turns out it SHOULD work though support is not official from NVIDIA in that regards.  And it won’t use the 3D stereo port on the back of the Quadros for it – that is reserved for the much higher end (and orders of magnitude more expensive) professional 3D solutions.

This is the part where some of our regular users will probably gasp in for air: the prices on the professional level cards from NVIDIA and AMD are higher than their similar consumer parts.  Exactly what types of prices are we talking about here?

Starting with the NVIDIA offerings, the Quadro FX 4800 sells for about $1570 or so while the FX 3700 goes for a more reasonable $790 or so.  The AMD FirePro v8700 card sells for anywhere from $930 to $999 and the FirePro v5700 can be had for as little as $394.  What you see then is a progression in card cost: Quadro FX 4800, FirePro v8700, Quadro FX 3700 and then the FirePro v5700.  In some cases we also saw performance scale in a similar manner; sometimes not so much.   What you need to decide then is how valuable performance is for you in your particular application in comparison to the price tags on these GPUs.

Professional 3D developers are finally getting their hands on the latest GPU technology from NVIDIA and AMD in the form of updated Quadro and FirePro designs.  The price gap between the Quadro FX 4800 and the FirePro v8700 might be a little hard to justify for some professionals that don’t spend a lot of time using 3d studio max (where the Quadro really seems to shine) since in some other cases the v8700 will outperform the FX 4800.  The same might be said for comparing the Quadro FX 3700 to the FirePro v5700 though in that case the benchmark results are definitely more heavily weighted to NVIDIA’s solution.  The Quadro does offer features like integrated stereoscopic visual computing, CUDA support and arguably the better multi-GPU solution for OpenGL which could make the difference in a developer’s final purchase decision.


Be sure to use our pricing engine to find the best prices on professional graphics cards and anything else you might need: