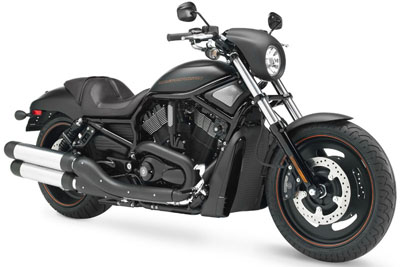 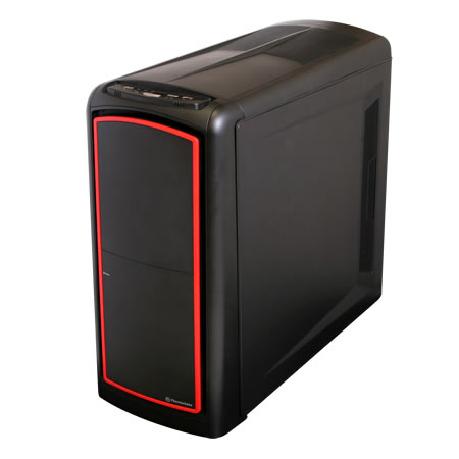 The matte black finish and other design elements used on the Element S remind me a lot of the 2009 Harley-Davidson VRSC Night Rod Special (see above). The minimalist, stealthy feel of the Element S’s exterior is quite appealing and definitely flips the script from most PC cases today that focus on tons of bright LEDs, large side panel windows, and other graphic elements that sometimes distract users from the actual architecture  and raw beauty of the case chassis. 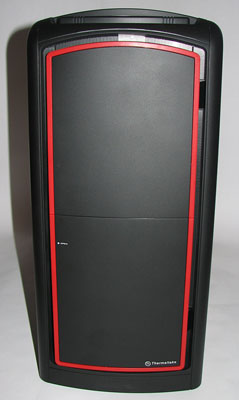 The front door panel of the Element S has a bright red trim that is pretty much the only bright color element used to complement the overall matte black theme. They also used a minimalist approach to their logo on this panel. On first glance, I thought the front door was cut in half so you could open the top and bottom independently. But, after further review, I found out the entire door swings open together. I think the crease in the middle of the door is a bit misleading and Thermaltake should re-consider its addition to the front panel. If I saw this case on the shelves of Frys Electronics or Best Buy, I would have assumed that the front panel was designed differently. 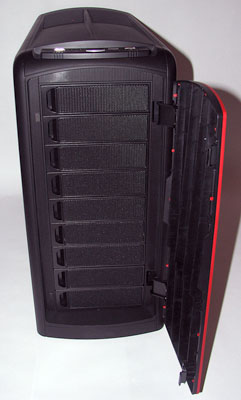 After opening the front panel, I was greeted with 9 optical bays that contained individual mesh covers to increase ventilation and air flow in the Element S. I’ve seen this design used more frequently over the past few years. Each bay cover is has a quick-release latch on the left side which really helps move things along during the installation process. 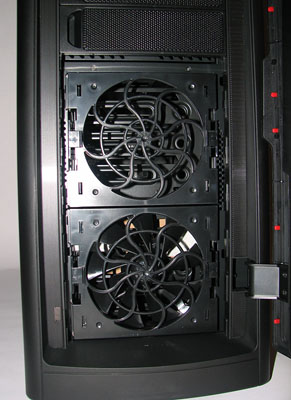 The bottom six optical bays on the front panel can house two 180mm fans. Thermaltake gets you started by including one of those fans with the case. I like having better air flow so I utilize the second fan option when it’s available. Each fan bracket can be easily removed and the best part of these brackets is that each 120mm fan just snaps into the back without screws. Pretty sweet I think. 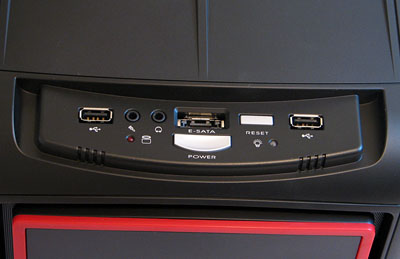 The Element S’s top panel includes two USB 2.0 ports, one e-SATA port, hard drive activity and power LEDs, and a reset and power button. This is a pretty standard layout, except for the addition of the E-SATA port. 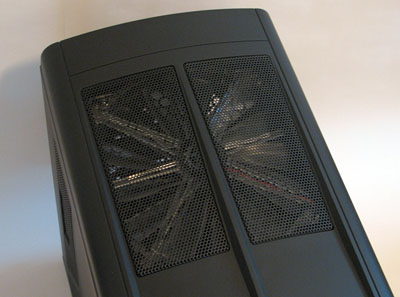 Another trend we’ve been tracking is the use of oversized “blow hole” fans in modern PC cases. The Element S features a 230mm red LED fan that quietly hums at 800 rpm. Old-school modders were the first to incorporate blow holes into their cases and it didn’t take long for mainstream computer companies to emulate their idea and market it to the masses. 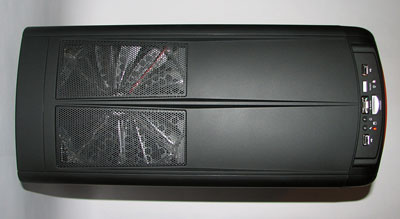 Here’s another shot of the top panel that shows the unique blow hole fan and top I/O panel. You can also see some three fins that add another dimension to the case as a whole. Even though I like the overall look of the fin design on the top of the case, I would have preferred a flat top so I can put an external drive there without worrying about it falling off because of the beveled edges on the fins. 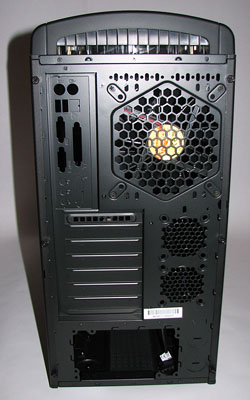 One of the first things I noticed when I took the Element S out of the box was that the back panel was the same color as the rest of the case. Most companies will match the front, top, and side panels to one theme, but leave the chassis and back panel a plain-old aluminum or steel color. Thermaltake went the extra mile and anodized the entire chassis matte black. The rest of the back panel includes mounts for two 60mm fans that can be used to help keep your video and PCI cards nice and cool during operation. The PSU also mounts on the bottom of the case, and there’s a small vent below the PSU to help with exhausting heat from the power supply. 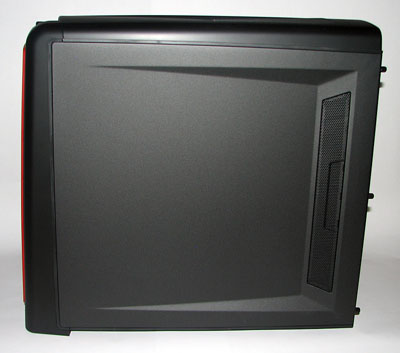 Here’s a quick shot of the left panel, which matches the matte black theme and includes a small vent toward the back of the case. Each side panel is fitted with anti-vibration and noise reduction material. 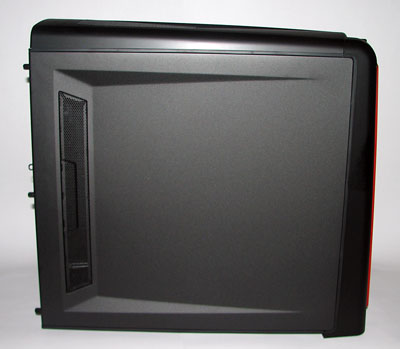 The right panel is identical to left panel in every way. 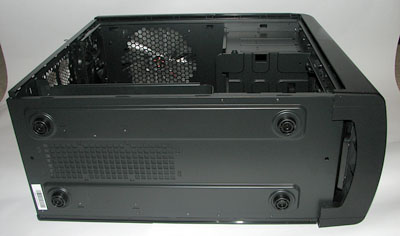 The bottom panel has four plastic feet and a small vent under the power supply. The vent is a great idea for those who have 120mm fans in their PSUs that can exhaust hot air out through the bottom of the case.

Zalman adds to their Reserator 1 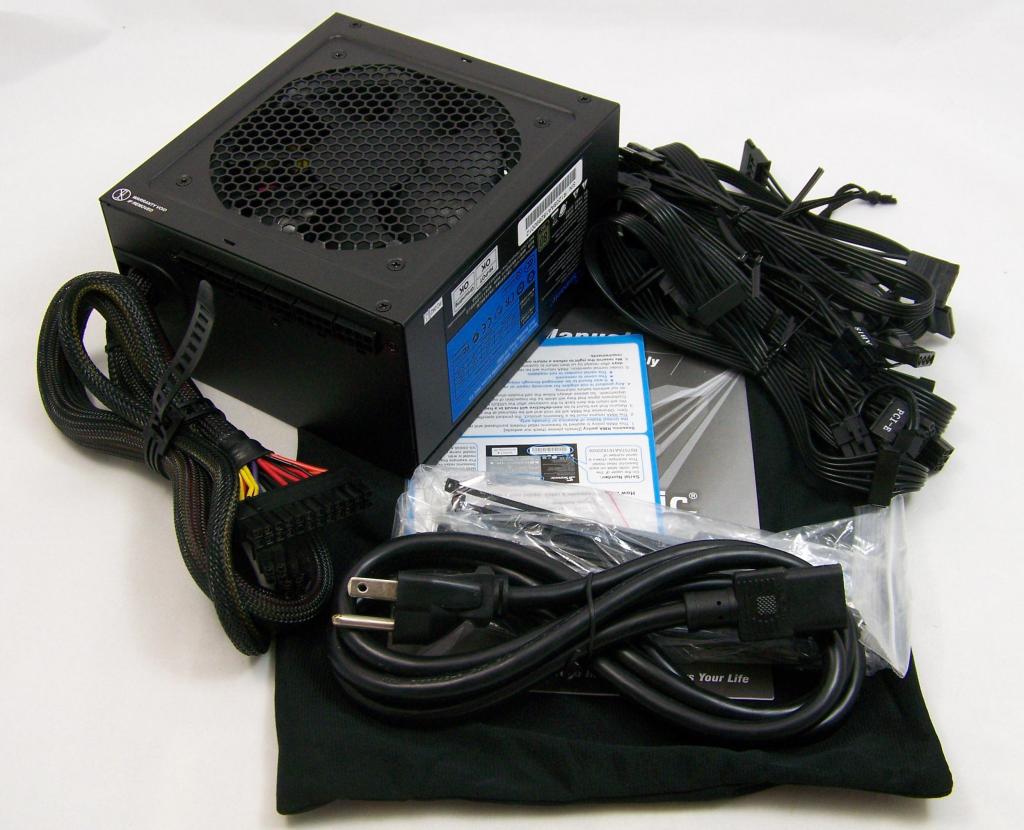