AMD has finally released their high end AM3 processor, and it certainly does not disappoint. While AM3 does not propel the X4 955 to new heights, there are certainly enough extra features and overclocking headroom to make this a exciting and desirable product.

Earlier this year AMD released the Phenom II X4 940, based on the Deneb core, and it marked a turning point in AMD’s efforts to be competitive with Intel in the desktop arena.  All was not roses with this launch, according to some detractors, and there were several pieces missing from the launch.  While the Deneb core would support DDR-3 memory, the first launch would be on AM2+ platforms only.  Another issue was that while the CPU cores ran at 3 GHz, the “uncore” part ran at 1.8 GHz.  While not a deal breaker, having the uncore portion at a full 2 GHz would have given a small, but noticeable performance boost to the product. 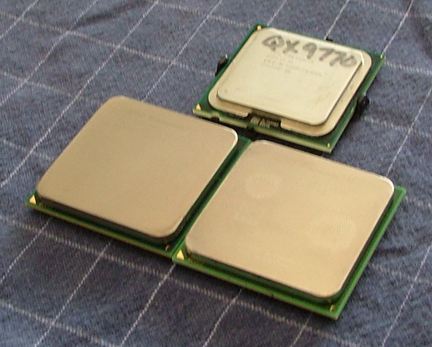 The three processors shown today.  Though you couldn’t tell it from this angle, the Phenom II on the left is the X4 955.


The second big launch this year was of the AM3 compatible X4 810 and X3 720 parts.  These are the first available AM3 parts that AMD is offering, but most reviewers were a little confused as to why AMD did not release a AM3 compatible X4 9xx series of chips.  The new AM3 parts had their innards tweaked a bit, so the uncore portion ran at the full 2 GHz.  This gives a small performance boost, and helps to improve memory and cache performance with these chips.  Unfortunately, the AM3 motherboards available at the time were pretty scarce, and their maturity was very much in question.  Still, the X3 720 became an overnight success, and proved to be an able performer and an excellent overclocker.  It also did provide enthusiasts with an avenue to open up the AM3 platform and DDR-3 use. 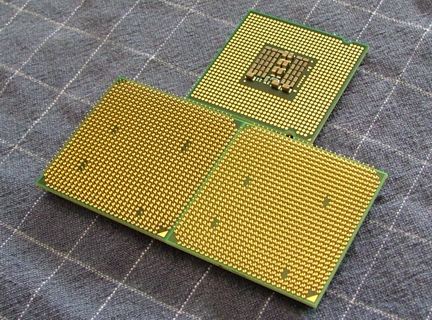 
One other positive advancement has made the AM3 platform a lot more attractive.  DDR-3 prices have been going down dramatically as of late.  It is now possible to buy 4 GB of good DDR-3 at a price about 30% more than comparable DDR-2 DIMMS.  This is a far cry from late last year where 4 GB of DDR-3 was often more than double that of DDR-2.  With AMD being more of the “value choice” it would have certainly hurt them to try to push the AM3 platform with memory prices so high.  So while the AM3 rollout was a slow affair, in hindsight it does seem as though AMD timed it about right. 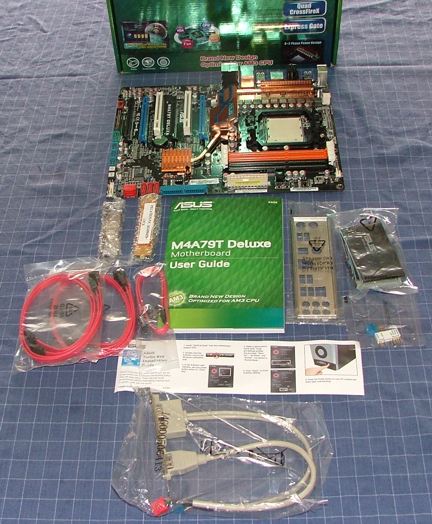 It is awfully hard to have a processor run without a motherboard.  The M4A79T Deluxe is a high priced board, but opening the box does not give one the impression of a $189 product.

Well it is about Time… Sorta

History is an interesting subject, but talking about it ad nauseum defeats the purpose of most reviews.  So let us skip forward to now, so that we can get a chance to see what AMD has on their plate today.  The release of the Phenom II X4 955 and X4 945 have been long awaited by enthusiasts hoping to get their hands on the hottest AMD processor on the latest platform.  Well, it has finally arrived, and I certainly think that the time was ripe for its release. 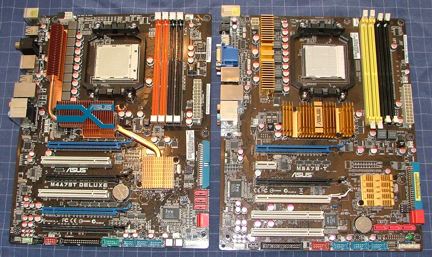 The M4A79T (left) compared to the M3A78T (right).  Better cooling, power, and layout distance the M4A from its older brethren.


The X4 955 is clocked at 3.2 GHz, and is now in a tie with the old X2 6400 as the highest clocked AMD processor ever.  The uncore portion runs at 2.0 GHz, which allows the CPU to communicate nicely with fast DDR-3 at official speeds up to 1333 MHz, and “overclocked” to 1600 MHz.  The processor is rated at a relatively modest 125 watt TDP, which is still a bit higher than the competitive Intel Core 2 Q9550, which is rated at 95 watts.  It is debatable whether Intel’s 95 watts is entirely comparable to AMD’s 125 watts, but the differences are relatively minimal (as we shall soon see).  The X4 945 is clocked at 3.0 GHz core, and 2.0 GHz uncore.  This product is almost identical to the X4 940, except of course for the faster uncore speed and the 938 pins that will allow the X4 945 to run in AM3 sockets.