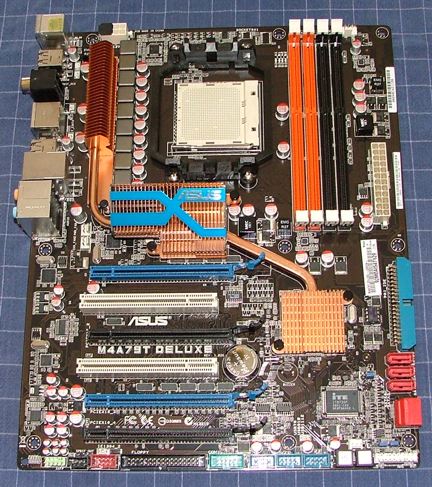 A closer look reveals the better spacing of the PEG slots, though in reality a user would want to stick to two or three graphics cards at once.  Buying 4 cards and trying to use them would be… disappointing.

AM3 motherboard support is now reaching the tipping stage, and we are seeing a variety of boards from multiple manufacturers that encompass prices from $109 to $199.  I am certain that there will soon be $99 boards, as well as more “boutique” style offerings above $200.  While AM3 is still not a value proposition as compared to AM2+ boards and DDR-2 memory, the ability of AMD to deliver a processor which can stand toe to toe with what Intel has at this particular price point is a good thing.  Add onto that a good measure of overclocking ability, and suddenly there is a rebirth of enthusiast interest in AMD parts. 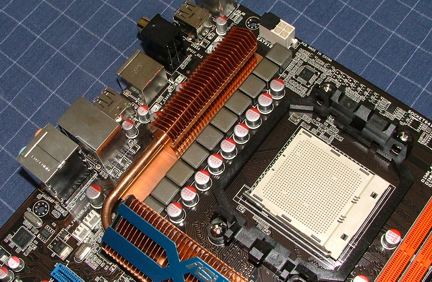 Though the extras in the box are not all that impression, the power delivery system on the Asus board certainly is.


The Phenom II X4 955 has a suggested list price of $245, while the X4 945 is sitting pretty at $225.  It is odd that AMD did price the AM3 version of this chip $40 higher than what the X4 940 is currently selling at (around $189 online).  Still, there will be a slight performance improvement due to the faster uncore speed, as well as the ability to run in both AM3 and AM2+ platforms.  We can directly compare the X4 955 to the Intel Core 2 Q9550, which runs around $270 online.  Not such a direct comparison can be made with the Intel Core i7 920, which sits at $279 or thereabouts online.  That particular part is still $34 more expensive than the 955, and only recently have X58 motherboards broached the $199 range.  Additionally DDR-3 memory needs to be installed in sets of 3 to extract the most performance out of the processor.  Once those extra  prices are figured in, the X4 955 usually runs around $100 less expensive (albeit with less memory) for a comparable i7 setup.  The X4 955 is an unlocked part, so it can very easily overclock by just changing the CPU multiplier.  Neither the i7 920 or the Q9550 feature that mechanism (though it is quite easy to overclock the i7 regardless).  The X4 945 is not unlocked, so it can only be overclocked by increasing the HT speed. 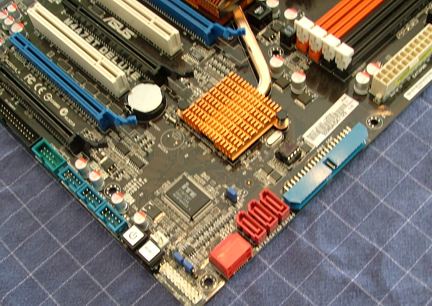 If there was a weakness to this board, it is that it only offers 5 SATA ports internally (plus 1 eSATA port on the backplane).  For those hoping for a RAID solution… you might look elsewhere.


AMD is certainly aiming this part for the high-midrange area, and their value proposition is certainly compelling.  A fully featured AM3 motherboard will cost around $179, but again products based on the 790 GX chipset are already as low as $109 for a decently kitted out board.  4 GB of 1333 or 1600 MHz DDR-3 memory will no longer require buyers to take out a second mortgage, and that is a big boost to this platform.

The real unsung hero of this story is AMD’s 45 nm process.  In the history of AMD, I do not remember a process that has come out as mature and performant as this one has.  If we consider that the 65 nm Phenom was a 450 million transistor part that ran at a max speed of 2.6 GHz, and pulled 140 watts (for the first generation of 2.6 GHz parts), it is pretty amazing what AMD has done.  The Deneb core is almost double the transistor count of the earlier 65 nm part, it clocks 600 MHz faster than its older brother, and still undercuts it in the thermal envelope department.  That is a tremendous accomplishment for the people who have developed AMD’s 45 nm process.  For it to be as mature and high performing as it is, even at the introduction of the first 45 nm parts, is really a watershed moment for AMD, and now Global Foundries. 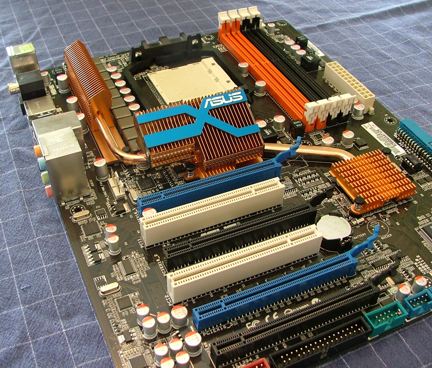 Overall, I can’t complain about the quality and features of the motherboard bundled for this review, but it is still not a “perfect” solution for those wanting more SATA connections.


Let us not forget one other portion of this launch, and it is the inclusion of the new Radeon HD 4890 video card which is based on the new RV790 graphics chip.  The increase in performance for a pretty minimal amount of wattage has been tremendous in allowing AMD to also compete with its arch nemesis in the graphics world, NVIDIA.  The $249 HD 4890 (and it is now lower priced after rebates and specials) has again put the pressure on the competition by offering excellent performance at a very manageable price.

The final release of this launch is the introduction of AMD OverDrive 3.0.  This tweaking application has been given a once over (again) and includes new features that will enable AM3 users to tweak their system in a variety of ways.  Combine this with some of AMD’s other bits of software, and users can downclock their machine for mundane tasks, and with a click of a button they can transform their machine into an overclocked-firebreathing monster which will tackle any and all games out there (or scientific, encoding, or rendering apps if that is your thing).  They are also including the new BEMP feature, which stands for “Black Edition Memory Profile”.  What this does is load up a memory profile which optimizes the latencies for a specific type/brand of DDR-3 memory.  The point of this is to get the lowest possible latencies that a manufacturer may not include in their ECP SPDs.