For this review I decided to use the X4 940 and the Core 2 Q9550 for comparative purposes.  The X4 940 is an AM2+ only part, and for added delight of our customers, I have tested the X4 955 in both AM2+ and AM3 boards so we can get an idea where performance scales with the newer memory technology.  The Q9550 was run on an X38 motherboard with DDR-2 memory at 1066 MHz.  As we have seen previously, the addition of DDR-3 has not really affected Core 2 performance in any significant way.  Core 2 with DDR-3 was meant more to help blaze the way for the i7 architecture which uses DDR-3 exclusively. 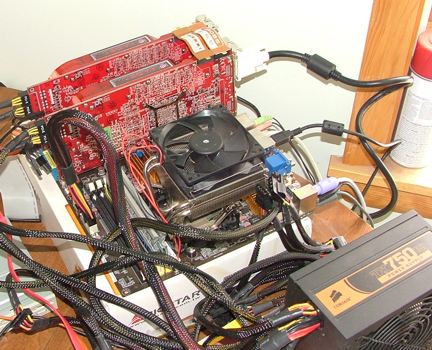 This is a pic of the X4 955 running on the AM2+ platform.  Note the higher end cooling that was used to get the 3.8 GHz overclock.

AMD sent along a pair of HD 4870s for a previous Dragon Platform review, so I am reusing them for this review.  I did not have access to the new HD 4890s, but that is of small consequence due to the type of testing that I am performing on these CPUs. 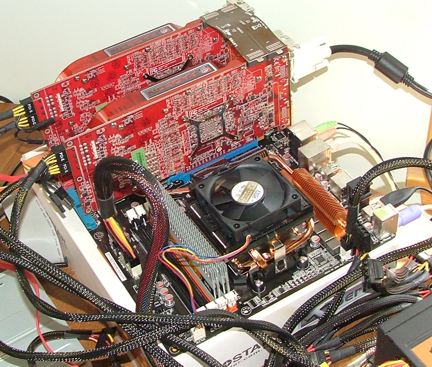 And here is the AM3 platform that the 955 is running on.  Note as well the PIB fan/heatsink that was utilized during this testing.  More on this combination later.

Three platforms and four CPUs will be making up the rest of this article, and hopefully we can get a bit clearer of an idea where performance will lie with the transition from DDR-2 to DDR-3 for AMD.  Just a warning… the socks will stay firmly attached to feet. 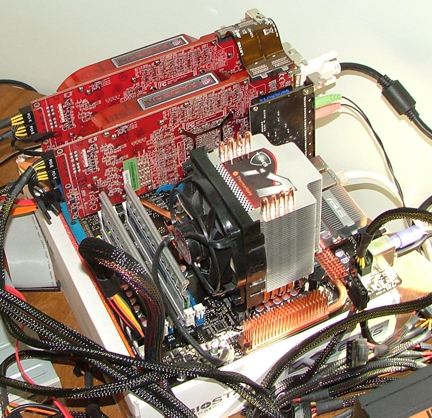 And finally the Core 2 Quad 9550 platform, based on the X38 chipset.  A fast, but slightly more power hungry, choice for the enthusiast.