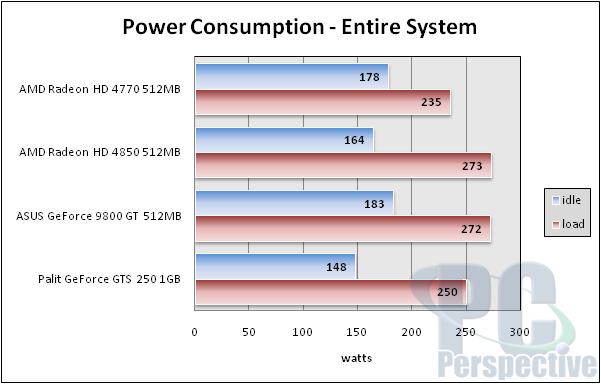 Because of those test configuration differences, we should only compare the Radeon HD 4770 512MB and the GeForce 9800 GT 512MB for our power results (though the HD 4850 and GTS 250 can be compared directly as well).  The idle power consumptions on the 9800 GT and HD 4770 are identical though the HD 4770 does have a big advantage in terms of peak power consumption the AMD card is 15% lower.

The gaming performance of the new AMD Radeon HD 4770 512MB graphics card is impressive.  For a $99 part (after mail-in rebate…) AMD has created a great product and for gamers that are looking to power a system with a 1920×1200 or 1600×1200 display, it should offer more than enough power to get through most titles.  In my testing, the HD 4770 was able to handle World in Conflict, Left 4 Dead, Call of Duty: World at War and even Crysis at top quality settings at 1600×1200 without issue.  Far Cry 2 was a bit more complicated – we tested the game at a quality level above what the GPU and memory buffer could really handle reliably and I feel that running the game at “High” quality would result in a great, and completely playable, experience. 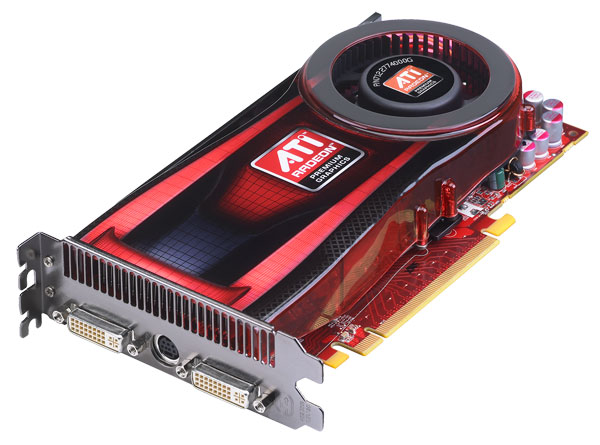 Let’s recap:
That is a lot of gaming performance in small window of budget and the decision could get complicated.  For me, the best/worst part of it really is the price on the HD 4850 – probably the best card of the bunch, if you can find it for the same $99 price as the HD 4770, it just makes NO sense to stick with the new card.  With price fluctuations and rebates the truth is by the time you read this it could be very different.

The Radeon HD 4770 512MB should be available starting this week.

Update: The Radeon HD 4770 is already showing up at Newegg:

The beauty of the Radeon HD 4770 512MB graphics card is that it brings another low price, high performance part to the market that will also potentially make AMD more money as the ramp up to 40nm technology at TSMC increases.  If prices stay stable (the $99 HD 4850 withstanding) then the HD 4770 is the best card you will find under $100.  If you are on a tight budget, you can’t go wrong with this offering and users that are comfortable in the 1600×1200 or 1920×1200 resolution with no plans to upgrade in the near future will find the HD 4770 more than capable of keeping up with their systems.