AMD and NVIDIA again have new graphics cards for us to throw into the GPU testing beast on our bench and see what comes of it. The new RV790-based HD 4890 card takes on the cut-in-half GTX 295 known as the GeForce GTX 275 in a battle for your hard earned $250.

The AMD RV770 architecture, known more commonly as the Radeon HD 4800-series of graphics cards, has to easily be one of the ATI team’s better accomplishments.  The design took a large risk in reality, stepping away from the goals of previous ATI designs and NVIDIA designs by going with a smaller, higher clocked die aimed at a lower price segment rather than starting with a larger, more complicated die and compressing it down for cheaper SKUs.  As it happened to turn out, though unlikely part of the company’s reasoning, the economic issues we are faced with today actually caused ATI’s gamble to pay off.  More and more gamers are looking for $150-$250 cards rather than the $599+ GPUs of previous years.

Rumors of the existence of RV790 had been swirling for some months and even our own Josh Walrath hypothesized what AMD was planning to do with the slightly updated GPU.  Some people sided with improved shaders units while others said it was a clock rate increase only.  It turns out both parties had it slightly off – the RV790 does in fact clock a lot higher thanks to some minor architecture changes and packaging adjustments. 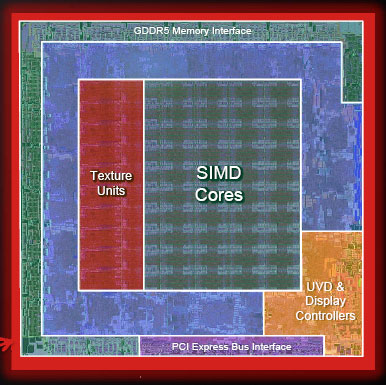 The primary logical architecture behind the RV790 remains completely unchanged from that of the RV770.  That means the performance per shader per clock will be consistent on the RV790 compared to the Radeon HD 4870.  What has changed is the physical layout of the chip (the GPU designers essentially spaced things out to better improve attributes like heat and timing) with what AMD calls the “decap ring.”  That ring, added along the outside of the RV790 GPU itself, helps to reduce leakage and voltage fluctuations allowing AMD and its partners to clock the core higher than the RV770 could go.

You want numbers?  We got numbers: 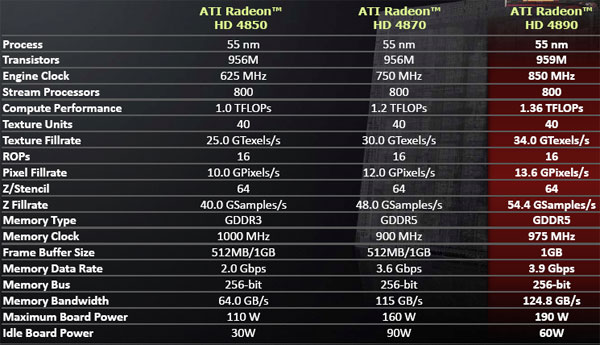 Total board power has increased by about 30 watts though idle power has actually be LOWERED thanks to some minor hardware tweaks. 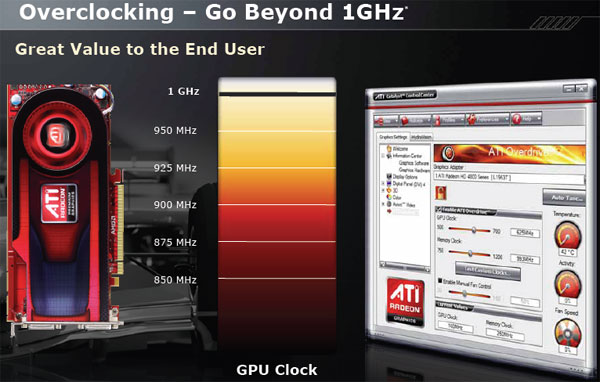 AMD was very interested in discussing overclocking with the RV790 – something that looks to be VERY interesting with the new design.  According to AMD directly, they have seen stock cards reach as high as 950 MHz on reference cooling and with better / louder fans speeds breaking the 1 GHz barrier on the GPU!  I unfortunately did not have time to test overclocking on my cards but will certainly do so when I get the chance to report.