The 8820 firmware has completely renewed my faith in the X25-M.  The weak link has been eradicated, and I’m thoroughly impressed with the renewed performance it will bring to all M series drive users.  I am also thoroughly pleased with Intel for being so open to feedback from the reviewers.

That said, there was a nagging thought in my mind throughout all of my testing.  If write speeds to the flash memory were constant at 80 MB/sec, how could it possibly shuffle around enough data to defragment those areas on a subsequent write pass while still accepting new data at full speed?  I’ve studied flash memory technology for some time now, and the math simply does not work.  I thought on it and my background in electronics kicked in a bit: The new write ‘waveform’ seemed clipped to 80 MB/sec.  The waveform appeared to be the lower 80 of a fragmented X25-E.  We did not have an E long enough to get accurate figures, but we do have this: 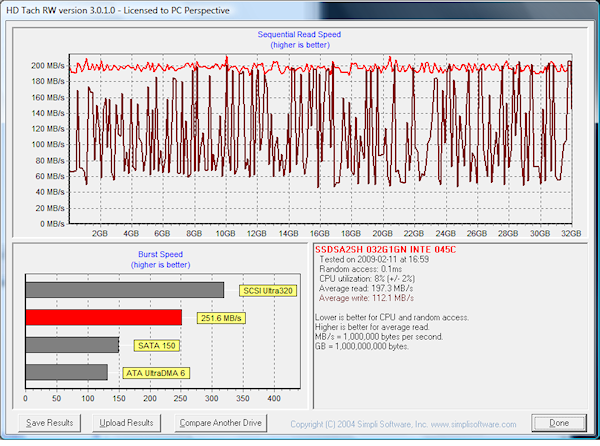 A fragmented X25-E for your perusal.


My Theory – It Can Write Faster

My own personal theory is that Intel got things *too right* with their custom controller.  The E series drives achieve similar IOPS with higher advertised write speed.  At similar price points, the E has a higher MTBF while the M sports higher capacity.  Looking past those differences, the write speeds are the main differentiator between the two lines.  After the X25-M went retail, many other SSD manufacturers played catch up with their own multichannel controllers.  Despite using MLC flash memory, competitors have broken the 200 MB/sec sequential write speed barrier, and have done so with only 4 channel controllers.  The X25-M talks to its flash across 10 parallel channels.  If the X25-M was truly flash speed limited at 80 MB/sec, other MLC flash would have to be over 6x as fast to achieve stated speeds over the fewer channels available.  Intel has been producing flash memory for quite some time now.  Somehow I doubt theirs is so much slower than the competition.

My hunch is they expected MLC write speeds to remain relatively low across the marketplace, and like many other products in similar chains, imposed a hard limit of 80 MB/sec to their M series drives.  While the idea of these kinds of limits can be annoying and frustrating, they are to some extent necessary for differentiating products of similar lines.  If an M series drive could write as fast as an E series drive, there would be considerably less market for the latter.

I’m not saying an X25-M can reach X25-E speeds.  I just think it can go faster than 80 MB/sec.  Remember, this is just an educated guess based on seeing what the new firmware is capable of.  I could be completely wrong.  There may be added ECC calculations required for MLC flash that slow things down, or some other timing / limits known only by Intel.  We may never know, but for the moment I say we enjoy what we’ve got.

Aside from sequential write speeds, the X25-M continues to dominate the SSD marketplace.  I have yet to see a 2.5” form factor SSD (SLC included) that holds a candle to its IOPS performance.  Intel has done a remarkable job with it’s new firmware, and with their SSD line overall.  While I used to be ‘on the fence’ about this one, I can now say I will be using an X25-M in all of my primary systems.  With the fragmentation effects minimized, the competition has that much more catching up to do.  Good job, Intel.

What… you’re still here?  Go grab the firmware yourself and flash it already!  Don’t forget to back up! 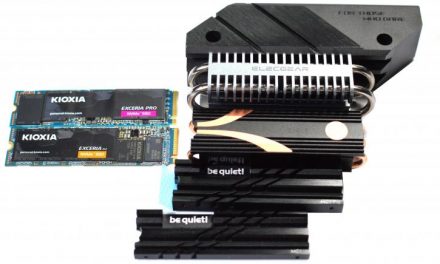