In what will likely be one of the biggest boons for the ION platform and the netbook/nettop market, NVIDIA and Adobe just announced a partnership for GPU-accelerated Flash content: both games and video. 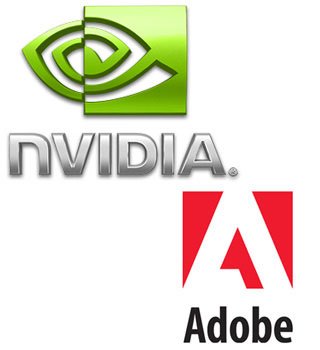 Details are short right now, but I have included the press release below.  I am heading out the door to a press event for NVIDIA in 30 minutes and I am sure I’ll have more to add after that.

UPDATE: Well the event was a bit of a let down as far as new information is concerned but I did find out that this particular announcement is really ONLY for the NVIDIA Tegra processors – the System-on-a-Chip design that the company is pushing into the mobile markets with.  Any news about GPU-acceleration for Flash on other platforms, like the one we are all interested in, ION, are still pending.

I would expect those updates to be sooner rather than later, but just not this week.

Computex – Taipei – June 2, 2009 – NVIDIA (Nasdaq:NVDA), the inventor of the GPU, and Adobe Systems
Incorporated (Nasdaq:ADBE) announced that they are collaborating as part of the Open Screen Project to optimize and enable Adobe Flash Player, a key component of the Adobe Flash Platform, to leverage GPU video and graphics
acceleration on a wide range of mobile Internet devices, including netbooks, tablets, mobile phones and other on-the-go media devices.

Adobe Flash Player will be accelerated across the range of NVIDIA processors, including NVIDIA Tegra, enabling users to enjoy uncompromised Web browsing, full H.264 video playback, and rich, consistent Flash technology based content any time, any place, and on any platform.

NVIDIA is also participating in the Open Screen Project, a broad initiative of 25 industry leaders to deliver a consistent runtime environment across devices. Led by Adobe, the Open Screen Project is dedicated to enable Web content and standalone applications across desktops, netbooks, mobile devices, televisions, and other consumer electronics that take advantage of Adobe Flash Platform capabilities. For more information, visit www.openscreenproject.org.

“NVIDIA’s unique expertise makes it an ideal partner for Adobe to integrate cutting-edge graphics and video acceleration into the Adobe Flash Platform, benefiting all types of devices,” said David Wadhwani, general manager and vice president, Platform Business Unit at Adobe. “Flash Player will leverage the power of the GPU to provide a rich, desktop-compatible Web experience on a wide range of devices.”

About Flash Platform
The Adobe Flash Platform is a complete system of integrated tools, frameworks, clients and servers for the development of web applications, content and video that runs consistently across operating systems and devices. Adobe Flash Player content reaches over 98 percent of Internet-enabled desktops, and Adobe Flash technology is the number one platform for video on the web. In addition, the mobile runtime has shipped and delivered Flash based content on close to 40 percent of all new mobile phones and devices in 2008. For more information about the Adobe Flash Platform visit www.adobe.com/flashplatform.

About Adobe Systems Incorporated
Adobe revolutionizes how the world engages with ideas and information – anytime, anywhere and through any medium.
For more information, visit www.adobe.com.

About NVIDIA
NVIDIA Corporation (Nasdaq: NVDA) is the world leader in visual computing technologies and the inventor of the GPU, a high-performance processor which generates breathtaking, interactive graphics on workstations, personal computers, game consoles and mobile devices. NVIDIA serves the entertainment and consumer market with its GeForce graphics products, the professional design and visualization market with its Quadro graphics products and the high-performance computing market with its Tesla computing solutions products. NVIDIA is headquartered in Santa Clara, Calif. and has offices throughout Asia, Europe and the Americas. For more information, visit www.nvidia.com.

A tough summit to scale