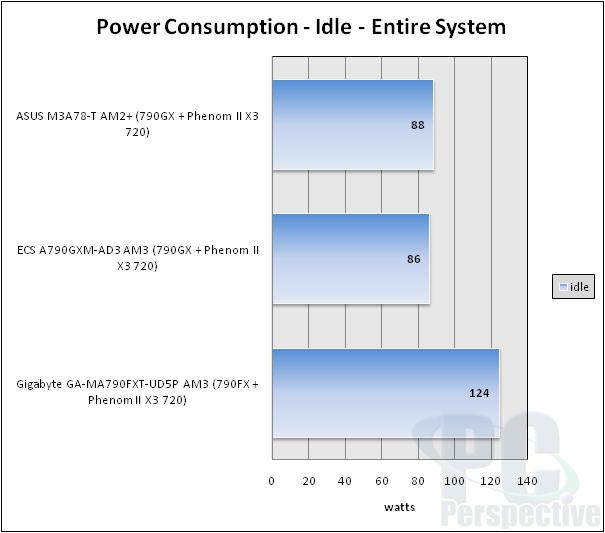 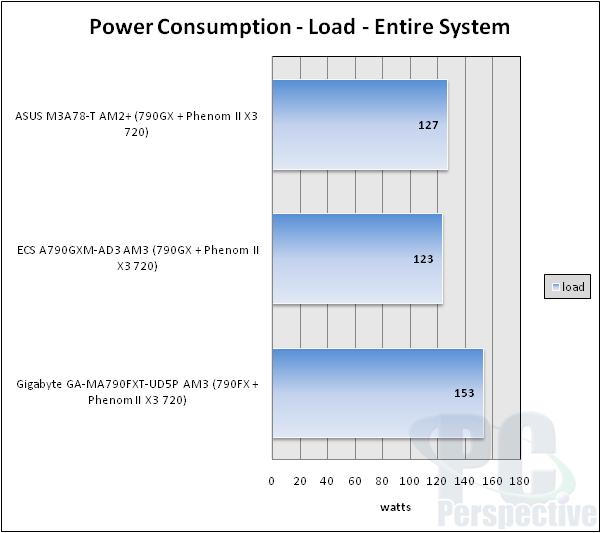 We noticed a huge jump in power with the Gigabyte board, but this was entirely due to the 9800GTX+ graphics card we installed for testing because this 790FX-based board did not have video available onboard. If we strip out the wattage consumed by the 9800GTX+ we can easily see all of these boards are very comparable and power efficient. Gigabyte uses their Easy Energy Saver technology to reach maximum system performance and save consumers a few bucks on their energy bills at the same time. 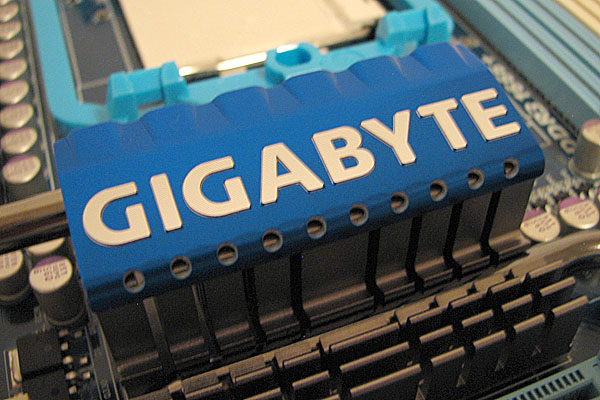 Our benchmark testing and overclocking results concluded that the Gigabyte GA-MA790FXT-UD5P is an exceptional overclocker and should give the budget overclocker and enthusiast every option to max out their AM3 CPUs. While the motherboard did record lower scores in our productivity and multimedia benchmarks, the differences between the other two competitors were minimal at best. Some other items to key in on were the DDR3 bandwidth numbers and single and multi-thread results during Cinebench testing that showed this board is on par with the competition in using multi-core, multi-threaded applications. 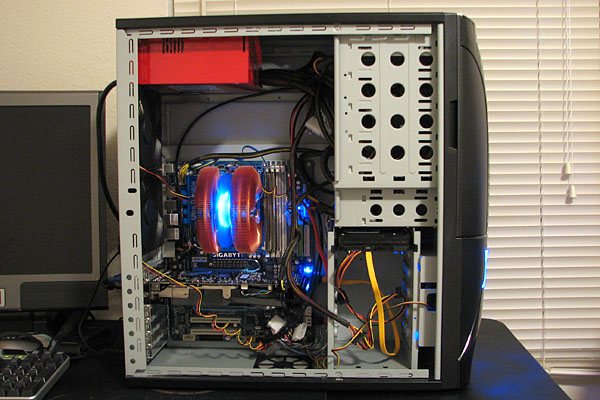 What’s not to like about x16 speeds on both PCI-E lanes and support for CrossFireX? Combine that with dual channel DDR3 1666+ support, dual Gigabit LAN jacks, a fully-loaded BIOS mastered for overclocking, and Gigabyte’s other custom improvements to the PCB itself and you have one unique, rock solid board that’s priced pretty close to where most enthusiasts can consider upgrading to the GA-MA790FXT-UD5P without breaking their wallets.

At the time of this review, the GA-MA790FXT-UD5P was currently priced around $179.99 at Newegg. A quick check at other popular online shopping websites like Buy.com and Tiger Direct indicated that this board was currently unavailable at all those websites. 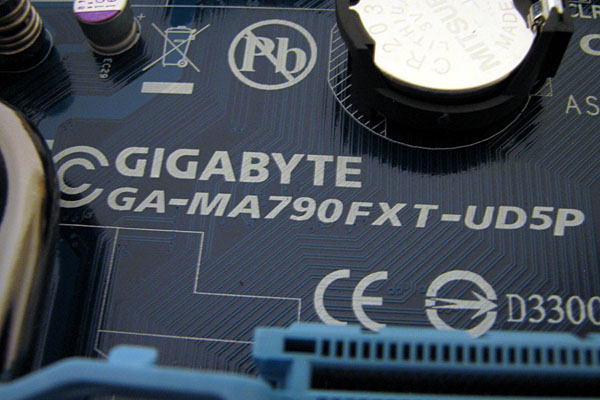 We’d like to thank Gigabyte for providing the GA-MA790FXT-UD5P for our review today. This was the first board we’ve tested with the 790FX chipset and it gave us a lot to think when compared to the 790GX chipset and other AM3 boards on the market.  Consumers might chose the 790GX-based boards for their onboard video capabilities, while other users might go with the 790FX boards for their gaming and overclocking prowess. The GA-MA790FXT-UD5P’s support for the latest AMD Phenom II processors, integrated DDR3 memory controller, and dual CrossFireX support with x16 speeds on both PCI-E lanes makes it a great mid-range board that should gain a lot of interest from consumers looking to upgrade from their current AM2+ systems and finally make the jump to DDR3.

In a strange series of events, both Steve and myself worked on reviewing this board.  While Steve did the majority of the work, I was able to participate with the introduction and my own thoughts on the board.

Like most reviewers, I have had my fair share of motherboards pass through my office.  The past few years for Gigabyte have been pretty exceptional though.  Their issues with bad caps, mediocre build quality, and more flash than substance with their boards have had a dramatic effect on the perception of users and enthusiasts.  Through a lot of hard work, good decisions, and a seeming philosophy of not skimping on even the lowest end part, Gigabyte has regained a lot of the respect that a couple of bad years cost them.  From the high end GA-MA790FX-DQ6 of last year, to this year’s GA-MA790T-UD5P, the support for the AMD platform has been pretty phenomenal (no pun intended).  While AMD’s products in the intervening time were overshadowed by the Core 2 products, and this past Fall’s release of the i7, they certainly have made back up some of that performance deficit with the latest AM3 based Phenom II parts.  Luckily for AMD, a motherboard like the UD5P is there to add another layer of value and features to the Phenom II product line.

The UD5P is really a tremendous product in many ways.  The layout is very good, the build quality is excellent, the performance is right where it should be, and the overclocking features have made this a favorite of many enthusiasts.  This is also the basis for a lot of the extreme overclocking with LN2 and now Helium, and the results from these boards have been outstanding (I believe it holds the world record still for the highest Phenom II overclock).

The one big thing that really still sticks out for me with this board is the 10 SATA ports.  When looking at competing products like the Asus M4A79T, which only feature 5 internal SATA connectors and the single eSATA, it is amazing how much more flexibility that gives a user.  For myself, I have 2 x Hard Drives and 2 x Optical drives in my main machine, but if I wanted to venture into RAID territory or add another pair of drives, I would be out of luck with the Asus board without some re-wiring from outside of the case.

The 8+2 power delivery system is another excellent feature that should provide a little extra stability and overclocking headroom.  The dual ethernet ports allow users to combine them into one virtual port with double the throughput.  The ALC889a, while still integrated sound, adds good features to the mix and a relatively clean signal.  There are only two real downsides to this design.  The first are the AHCI issues with the SB750 southbridge, which are well known and documented (and hopefully fixed in the upcoming SB800 series of chips).  The other potential issue is the use of 2 x 16X PCI-E slots, which will limit users to “only” two video cards in CrossFireX.  Other competing products from Asus and MSI allow for up to 4 video cards in CrossFireX.  Then again, the vast majority of users will use only one card, and a far smaller group will use two.  The percentage of folks using 3+ is obviously quite small, and the resultant performance increases for adding more than 2 cards are far smaller.  So skipping out on more than 2 cards should not cause many issues for Gigabyte at this time.  Unless of course a user has a x8 PCI-E RAID card already installed and wants to use CrossFireX.  Then there could be a problem.

Overall I was quite pleased by my time with the board.  The appearance of the board is quite pleasing, and the layout again cause very few issues with me.  The cooling system on the chips was also quite functional, and again was quite attractive in design.  The Ultra Durable 3 features also seem to add a lot of value and security, and I believe that they actually add real engineering value to the product.  It is simple physics that the thicker the copper, the less the resistance.  Less resistance means lower heat produced and less energy expended as waste.  Add into the equation that the board is less expensive than the slightly more limited Asus 790FX AM3 board, and users certainly have an attractive option at the high end for AM3 parts.

Some of my results diverged from Steve’s, but this could merely be a difference in BIOS revision and memory modules used.  I was able to achieve around 12.8 GB/sec of memory bandwidth in the Sandra tests while running at DDR-3 1333 speeds at fairly tight timings of 7.7.7.20 on a set of Corsair DIMMS.  I compared my board with the Asus M4A79T, which is their second top end AM3 board (the new CrossHair III is the very latest and most expensive from Asus).  Overall the Gigabyte board slightly lagged the Asus product, but the differences were often less than 2%.  About the only major difference I saw was that the Asus board was able to do USB writes 5% to 10% faster than the Gigabyte board, while the Gigabyte board was around 5% to 10% faster in USB reads.  Something of an odd outcome, but in the overall scheme of things the performance of the boards were nearly identical.  What was significant was that the Gigabyte board was able to run the memory at DDR-3 1600 speeds all day long without issues, at tight timings, while even with loose timings the Asus board would show instability in a handful of applications combined with decreased performance in others.

While the top end of the AM3 segment is still quite small, make no mistake that if I were to build a Phenom II based system as a budget enthusiast, this board would be my first choice.


You can pick up the Gigabyte GA-MA790FXT-UD5P at Newegg.com!