We revisit the OCZ Vertex and throw in the recently introduced Super Talent UltraDrive ME into the mix. Both drives are controlled by the ARM-based Indilinx CPU. We put these two against SSD’s with Samsung, Intel, and JMicron controllers, and even threw a few high end hard drives for fun. Evaluation of fragmentation slow downs and TRIM tool operation will also be addressed. Come on in and check ‘er out!

We first previewed the OCZ Vertex back in February.  Our tests were done with pre-release firmware and the drive, while a decent performer, was very rough around the edges.  Over the coming months we saw several updated firmwares released.  I put each release through a batch of thorough testing and even passed reports back to OCZ as to help work out some of the kinks.  I resisted putting out a full piece, even after the drive went ‘retail’, as I felt it simply was not ready for prime time.  Some early retail firmwares resulted in random bricking and data loss, and most of them resulted in severe fragmentation / performance degredation with continued use.  With each new firmware came some fixes, and some additional reasons to hold off on considering it a truly ‘retail’ product.

Late last month, Indilinx pushed out version 1571 of its firmware.  This was propagated out by the repsective manufacturers of SSD’s driven by their controller.  Today we will look at two such units, provided by OCZ and Super Talent. 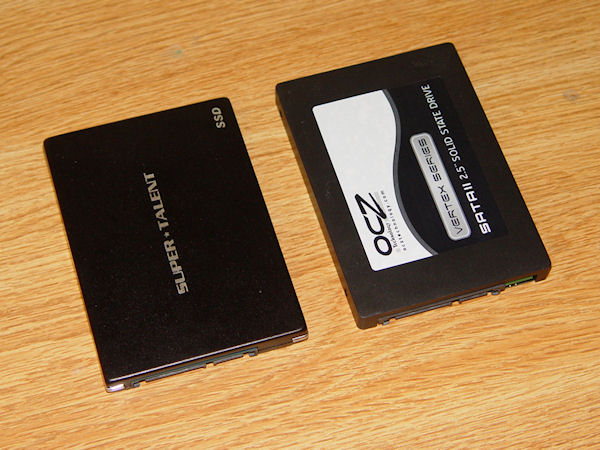 A pair of Indilinx driven SSD’s await the gauntlet.

The blue light at the end of the tunnel