TRIM to the rescue! (sort of)

Indilinx added proprietary TRIM support starting with firmware 1370.  It is proprietary because TRIM is not a final standard, and is not present in any operating system to date.  Windows 7, despite published info on the matter, does not yet(*see below*) implement it in beta or even the RC1, even though some seem to believe otherwise (working TRIM would result in a *much* bigger improvement).  The tool is not very well publicized by OCZ, primarily because it is rough around the edges and early versions of it caused data corruption.  There are also a bunch of disadvantages at the moment.

*EDIT* After speaking with a member of the team responsible for implementing TRIM in Windows 7, and upon further investigation, it appears the real issue is that Indilinx removed ATA TRIM support under 1571 / 1.30.  Nothing is said about this in the release notes, so I had to poke around a bit more on the OCZ forum to find something resembling a real answer.  So it appears the issue is not at the OS level, but with the Indilinx firmware.  The piece over at Hot Hardware would have been using 1.10 based on the published date, but the numbers they got suggest TRIM was not working in that version either.  The best TRIM gain seen in their testing was only ~10% – significantly smaller than the over 50% drop in write speeds we saw without TRIM at work.  ATA TRIM is rumored to be finalized and implemented by Indilinx this month, and I will revisit and retest once it is made available.


While Super Talent has the tool right on their web site, you must fish around the OCZ forum to find it.  Luckily you can simply use either tool, as they are both identical (and by identical I mean they have the same CRC/MD5 hashes).  The only difference is their names.  Super Talent renamed theirs to ‘PRT’, while OCZ stuck with the rather scary sounding ‘wiper.exe’ – named by Indilinx.  I don’t know about you, but I cringe at the very thought of running something called Wiper on my operating system drive.  I tried out the less scary sounding one on the fragged SSD: 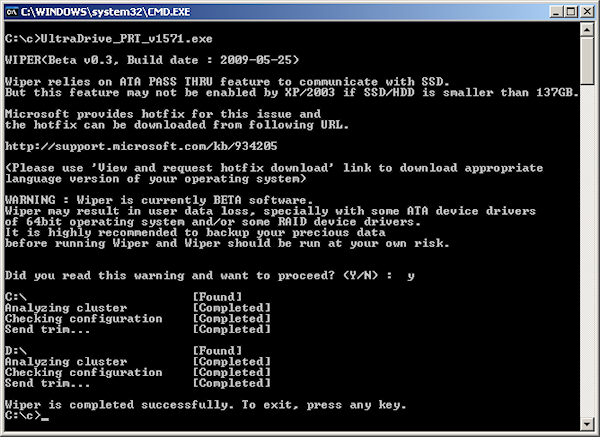 This first attempt was conducted with two partitions taking the first 30GB of the drive.  I then conducted two benchmark passes to verify the results:

The space consumed by the two partitions was cleared and restored to near-new performance.  Back at the beginning of these tests, that ripple pattern carried across the entire drive, and never got worse.  Let’s see what happens if we do additional sequential write passes with fragmentation present elsewhere on the drive:

Fragmentation present elsewhere on the drive seems to ‘re-infect’ the previously clean areas over time, meaning you would need to run the tool frequently in order to keep performance up.

I then switched the fragmented UltraDrive ME for a fragmented Vertex and re-ran the tool, this time with an OS partition spanning the entire drive:

Here we see write speeds have fully returned to initial values.  Bear in mind that our full pass tests wipe out the OS and any files present on the drive.  In the case where files were present, those files would remain in their fragmented state and possibly spread to cleaned areas with additional use.  From additional testing there seems to be a point at which fragmentation spreads or heals with additional use.  A rough guess puts that at around 30% fragmentation.