MSI punches up its newest flagship X58 motherboard called the Eclipse Plus with quad SLI, CrossFireX support, but how does it compare against its predecessors and a couple lower-priced X58 boards from other vendors? We run it through our benchmarks and take a detailed look at MSI’s latest motherboard to support the i7 platform. 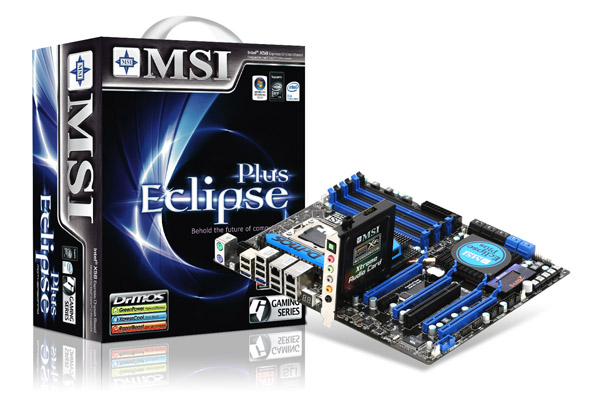 The only game in town that supports Intel’s i7 processors is still the X58 chipset and vendors have been coming up with creative ways to entice consumers to their latest and greatest versions that support this platform. While some lower and mid-range LGA 1366 boards are coming down in price, most companies like ASUS, Gigabyte, and MSI are keeping their flagship mobos close to the $400 mark. These high-end motherboards are usually reserved for the most hardcore and wealthy enthusiasts out there who have the cash to drop on these feature-packed components. 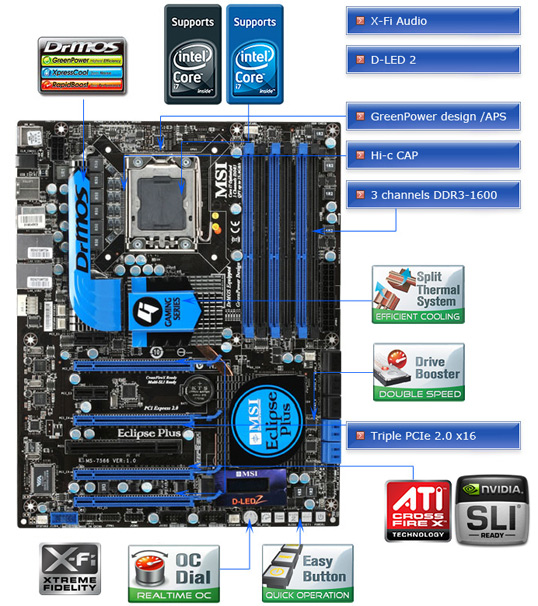 In April, MSI released their newest X58 motherboard called the Eclipse Plus. This board takes the reins as MSI’s top X58 board from the successful Eclipse SLI, which was a true performer and exceptional overclocker. MSI also upped the ante with this version by adding NVIDIA’s NF200 chip that supports true quad SLI and Quad CrossFireX in a unique 16/16/16/4 formation. There are only a handful of boards that have this chip and it’s typically reserved for the most elite motherboards that want to push high definition gaming and GPU computing as far as it can go.

To go with quad SLI and CrossFireX support, the Eclipse Plus also has a second generation, six-phase DrMOS power design and Active Phase Switching. Novice overclockers can also boost the performance of the MSI Eclipse Plus to higher levels with the help of MSI’s onboard OC Dial. This overclocking feature enables real-time overclocking and downclocking of the CPU clock speed manually.

MSI aims for simplicity with the P55-CD53