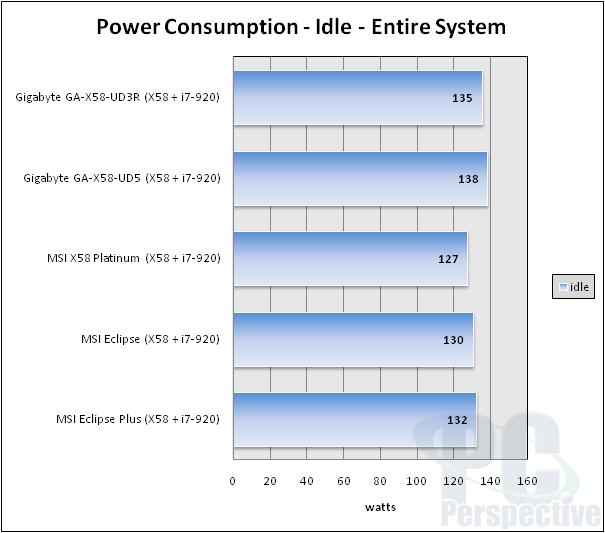 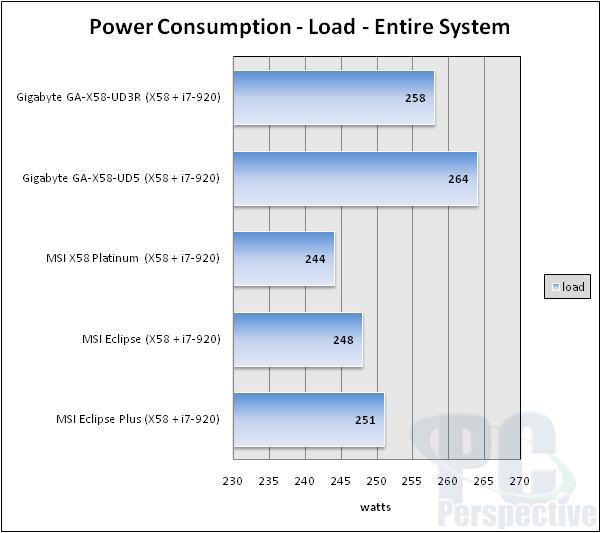 All our MSI boards experienced lower power consumption during load tests than its Gigabyte counterparts. This is due to the DrMOS and GreenPower technology built into MSI’s X58 boards. Features that focus on energy efficiency are some of the key improvements we are seeing in all areas of computer hardware.

The Eclipse Plus seems to fall right in line with our analysis of other MSI boards that have made their way across our test bench.  Our gaming benchmarks showed some performance improvements with the MSI Eclipse Plus, but lower performance scores in our media encoding and overall system benchmarks. When we moved onto overclocking, we were pleasantly surprised at this board’s range of overclocking options and potential. It seems to handle higher voltages a lot better than some others we’ve tested, and its stability was a strong factor in how we were able to reach 4GHz with ease. 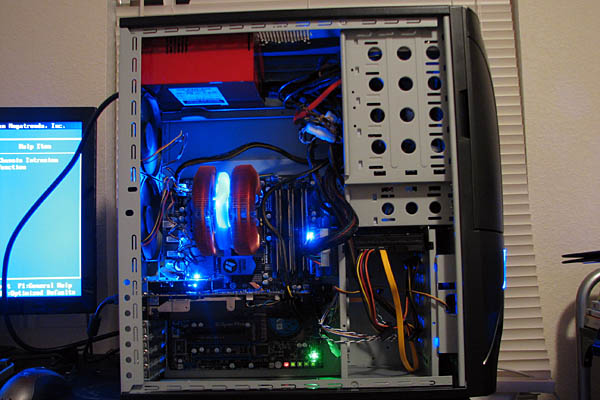 There was also a lot of headroom still left for more extreme overclocking with better cooling solutions. Those power users who are willing to lay down $389 for this board will most likely have the cash for a custom watercooling or phase change system. Either way, they will be more than happy with the voltage options and other CPU overclocking features available with the MSI Eclipse Plus.

A couple features that really stood out with the MSI Eclipse Plus was its ability to support quad CrossfireX and SLI video card configurations and having all three PCI-E slots capable of x16 speeds. This is fairly significant because most boards have that third PCI-E slot set at x8 or x4 speeds. The onboard OC dial and other buttons were a great addition, especially for those of us who swap out our hardware often. the OC dial seemed to work as advertised, but we did have a problem with stability when we tried to push it too far. It’s best just to use it for incremental adjustments and not for all your base clock configurations. 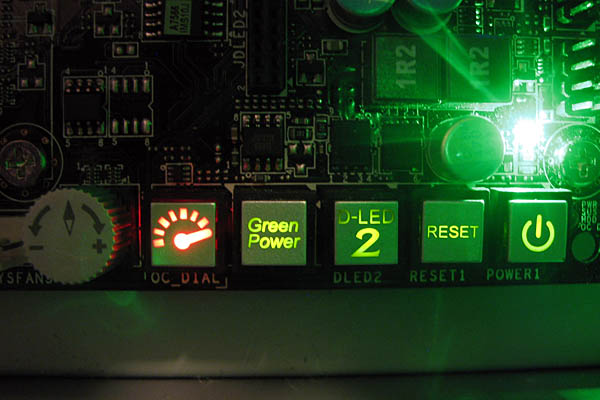 The DrMOS and GreenPower Genie really seemed to balance the amount of power our i7 system needed, which should be a huge selling point for MSI and consumers. When GreenPower was initialized, it shut down all non-critical system components including all the case fans, LEDs, and other resources that pulled juice that wasn’t related to keeping the PC running. This is an excellent option for those who need to keep their power bills down and just want maximum power when they are gaming or performing other highly-intensive computing tasks. 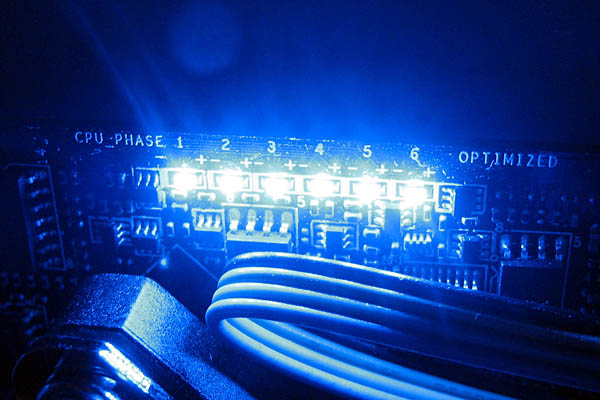 As a flagship motherboard, we expected the MSI Eclipse Plus to throw every new technology and feature available into it. The bundled accessories were all very useful, and the Creative X-Fi Xtreme sound card was another key improvement that will help gamers gain back a few FPS by offloading sound to this sound card instead of onboard audio. The DLED2 debug panel and GreenPower Genie hardware solution were very unique components that won’t be found with any other vendor except MSI. 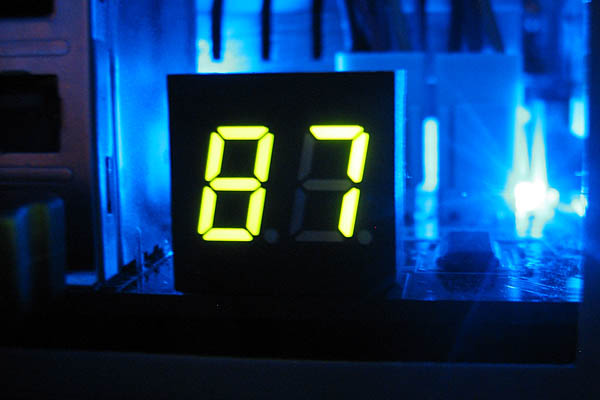 The absence of PATA support was something I commented on during my initial MSI Eclipse SLI review. I didn’t think ti was a necessary component to keep on board because most enthusiasts purchasing high-end components won’t have any PATA devices in their system. MSI still left on the PS/2 keyboard and mouse ports, but that’s understandable because they might be needed for troubleshooting issues.

Overall, we couldn’t have asked for any other features than what MSI provided with the Eclipse Plus. It supports all the latest i7 processors, can handle any NVIDIA SLI or ATI CrossFireX configurations, and triple-channel DRAM support rounds out the package. Bundling an external sound solution and other power-saving features only makes this board more attractive to the consumer.

At the time this review was written, prices for the MSI Eclipse Plus were around $389.99 at Newegg. That puts it squarely in the higher-end of the X58 motherboard market.

After analyzing all the data we gathered reviewing the Eclipse Plus motherboard, we have to say it’s one of the most unique X58 solutions available on the market. From the six-phase power design to quad SLI/CrossFireX support, we can’t say enough about how versatile this motherboard truly is. The overall layout and design is gorgeous and is organized in a way that’s easy to configure and use. Other key MSI-specific applications like HDDBackup, GreenPower, and MSI Drive Booster make this board full-body X58 solution that should drive many consumers to upgrading to the i7 platform. 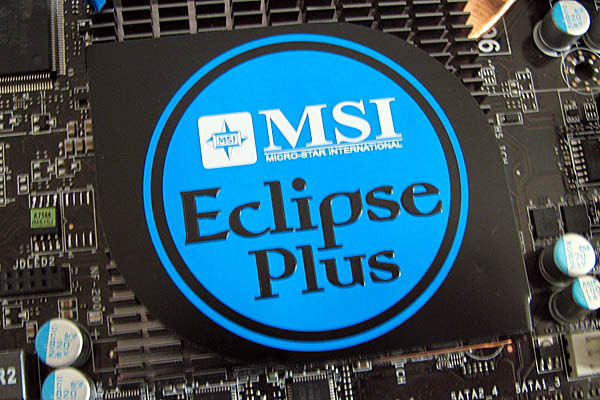 The price of the MSI Eclipse Plus might scare off some consumers, but hopefully they can weigh in the other factors that make this board attractive like bundled accessories and programs, multi GPU support, and extreme overclocking capabilities. All of these features make the price of this board well worth the investment. We would like to award the MSI Eclipse Plus with our PC Perspective Gold Award and we easily recommend this motherboard for any high-end gamer or overclocker’s next X58 upgrade.

You can pick up the MSI Eclipse Plus motherboard at Newegg.com!