MSI DrMOS and APS
For highest performance and power efficiency, MSI Eclipse Plus is equipped with the 2nd generation, true 6-phase MSI DrMOS power design and APS (Active Phase Switching). The board is very power efficient as MSI APS switches the phases of the CPU and also of the QPI, chipset and memory. Besides this it is the only OS independent power saving system on the market.

Hi-c CAP’s
For the best stability and longest lifespan, MSI Eclipse Plus is equipped with the next generation Solid Capacitor called Highly-conductive polymerized Capacitors (Hi-c caps). This features ensures high voltage derating and they resistant to high temperatures.

Split Thermal Design
The new heatpipe on the MSI Eclipse Plus is a split thermal cooling. This new cooling prevents the chipset to transfer any heat to the cool running DrMOS PWM. To emphasize the new special heatpipe design MSI Eclipse Plus has a new stunning colour scheme. Since the heat pipe is attached with metal screws to the PCB, it can be easy remove for the extreme liquid nitrogen overclockers.

Improved BIOS
MSI has improved its BIOS a lot with the help of renowned overclockers. New BIOS features have been added such as CPU Specification and M-Flash. MSI’s M-Flash is the world’s first BIOS feature allowing a second BIOS booting up from USB. Users can test-drive the new BIOS before actually flashing it.

MSI GreenPower Genie
MSI GreenPower Genie can be placed between the power supply and MSI Eclipse Plus mainboard. It is connected via the System Management Bus and can detect real-time 12V, 5V and 3.3V. The voltages are displayed in the BIOS, MSI GreenPower Center software and D-LED 2. It is the only system that real-time shows the true power values and system’s efficiency.

MSI Drive Booster
It is very easy to double your HDD performance with the all new MSI Drive Booster. This feature is OS independent too, which allows you to double improve the RAID speed. MSI Drive booster is easy to use, just plug & play. 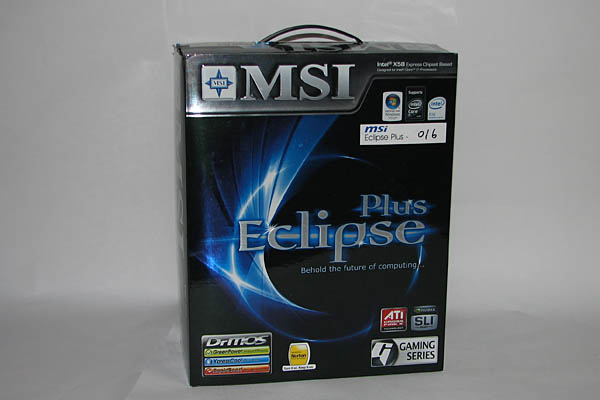 The Eclipse Plus is packaged in a large metallic blue and black retail box that showcases all the motherboard’s features. There isn’t a photo of the motherboard, but there is a front flap that opens up to display some of the board as well as some of the bundled items. 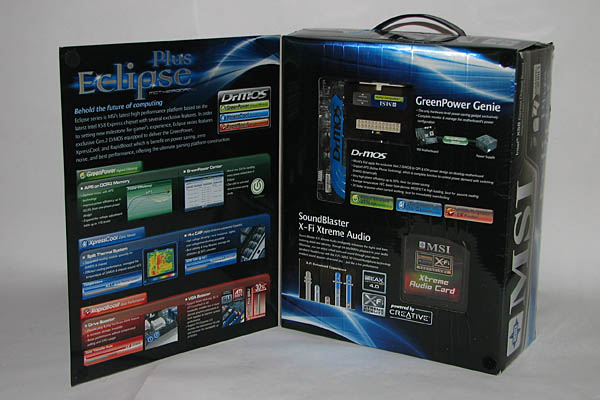 The front panel flips open to give consumers information on all the power-saving and overclocking features available on the Eclipse Plus as well as provides a few clear windows to see the actual Creative X-Fi Xtreme audio card and DrMOS heatsink. 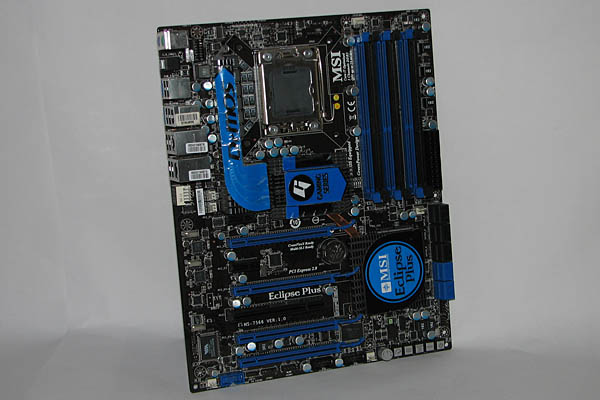 Here’s the MSI Eclipse Plus in all its glory. The color scheme of the board is midnight blue and black and this is consistently displayed throughout everything from the DIMMs to the PCI-E slots. One item consumers will key in on is there is no PATA support onboard. This shouldn’t be a problem for power users, but those who want to use legacy components with this board need not apply. 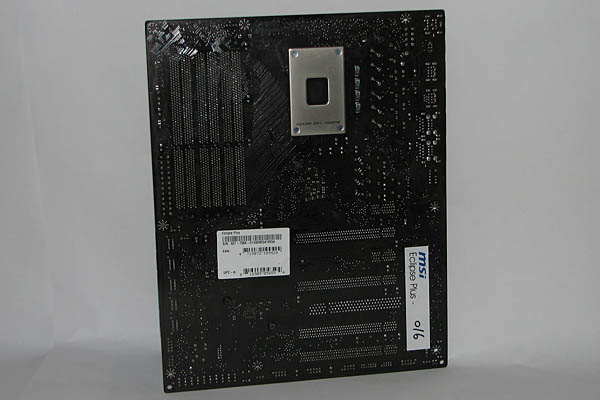 The back panel of the PCB is nothing special as usual. Just a simple aluminum backplate is placed behind the CPU. MSI also added a hand-written number that we assume is the production number associated with the board when it was manufactured. 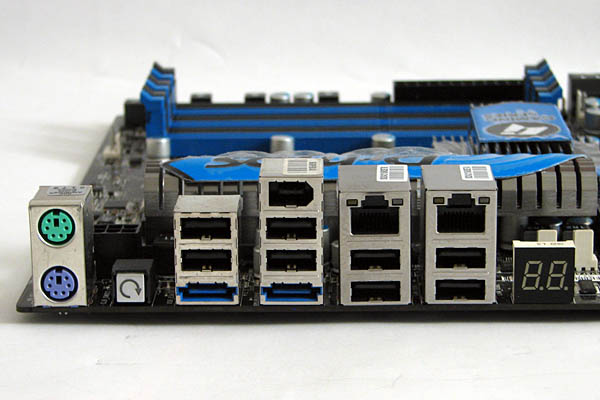 The back I/O panel has everything enthusiasts have asked for from vendors — eSATA support, Firewire, dual LAN, Clear CMOS button, post code LED display, and enough USB 2.0 ports to add external hard drives and other devices. The entire line-up on this I/O panel includes PS/2 keyboard and mouse ports, two eSATA ports, one Firewire 400 port, eight USB 2.0 ports, dual Gigabyte LAN jacks, and debug LED. The audio ports are available with the Creative XTreme sound card that MSI bundled with the Eclipse Plus. 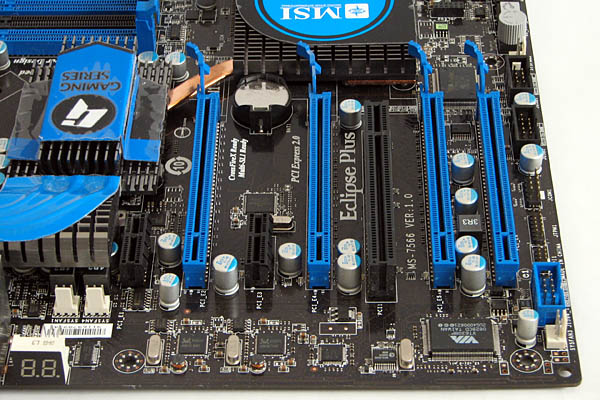 Here’s a great shot of the four PCI-E slots as well as the two PCI-E x1 slots and one PCI slot. The first three PCI-E slots are full x16, but the fourth slot runs at x4 speeds. This is one of only a handful of motherboards with triple PCI-E slots running at x16 speeds. There’s not much room for users to add extra PCI devices because of the focus on being able to use quad SLI or CrossFireX graphics cards so consumers should keep this in mind when weighing the pros and cons of purchasing this particular board. 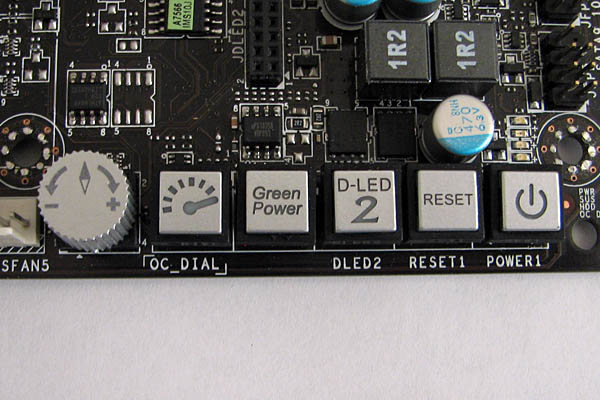 One of the main modifications MSI made to their Eclipse product line is adding onboard buttons for overclocking and other basic functions. They added a power button, reset button, DLED2 button, GreenPower button, and an overclocking dial to manually change the CPU clock speed on the fly without having to go into the BIOS or use MSI’s software-based OC utility. 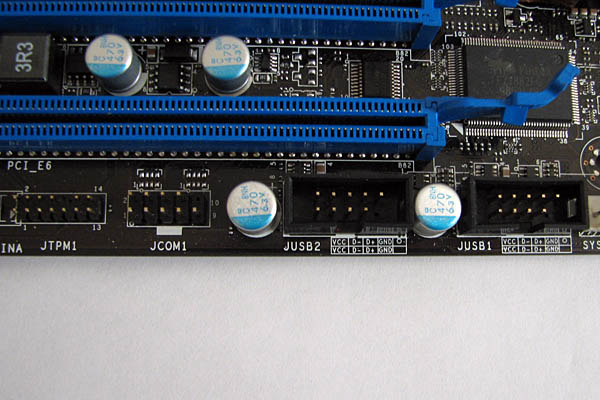 There are two USB 2.0 headers on board as well as a JCOM1 header that can be used to attach a serial device. The JTPM1 header connects an optional Trusted Platform . 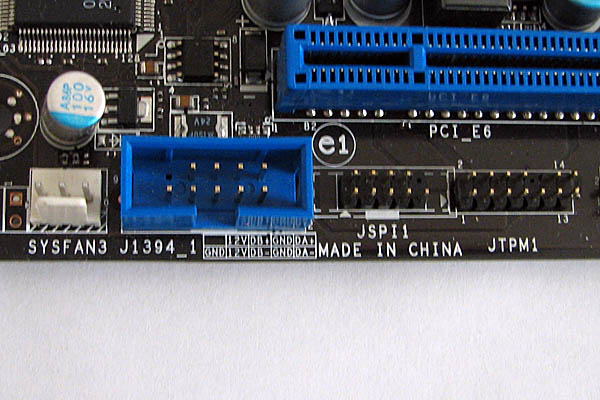 Users can also have an extra Firewire header to connect those legacy devices to the Eclipse Plus. 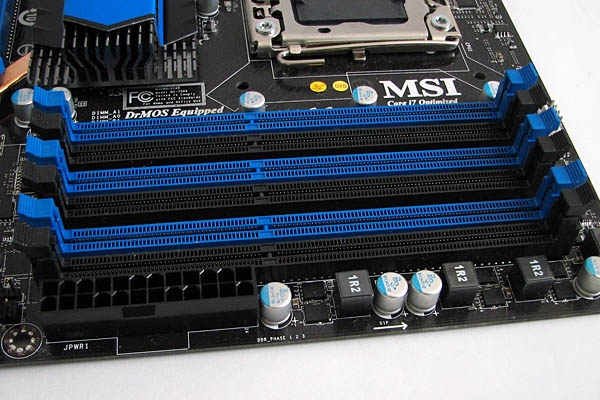 The Eclipse Plus supports six unbuffered DIMMs of DDR3 800/1066/1333/1600 SDRAM. It supports 1GB, 2GB, and 4GB memory modules in a triple channel configuration. This motherboard can utilize a max of 32GBs of RAM. 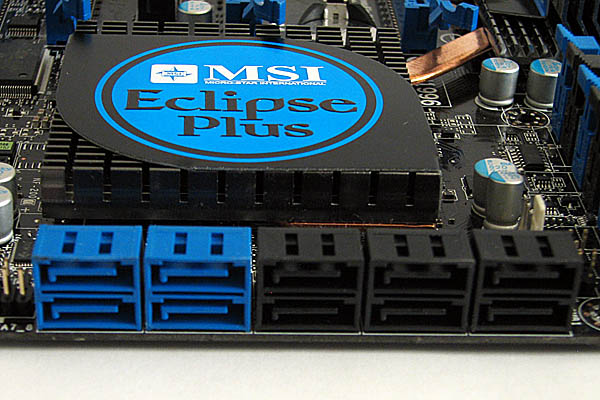 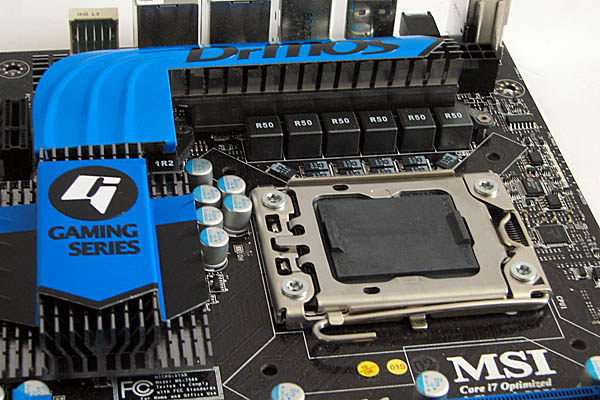 The six phase DrMOS power design is the centerpiece of this board’s “green” power properties. The only capacitors that can be seen close to the CPU are used by QPI, but other than that the layout is welcoming to those using third party air, water, liquid nitrogen, or phase change cooling systems. This board is equipped with solid capacitors called Highly-conductive polymerized Capacitors (Hi-c caps), which ensure high voltage derating and they resist high temperatures better.

Wow, that was a lot to cover, but the bottom line is this board is really geared toward elite enthusiasts who want to stay on the bleeding edge of technology. The missing PATA support is no fluke and I’m sure we’ll start seeing other legacy components being phased out on high-end motherboards in the very near future.