I measured the AC power input to the SilverStone Element ST70EF 700W PSU with the Extech power analyzer while the total DC load was found by adding all the individual +3.3V, +5V, +12V, -12V and +5VSB loads together. 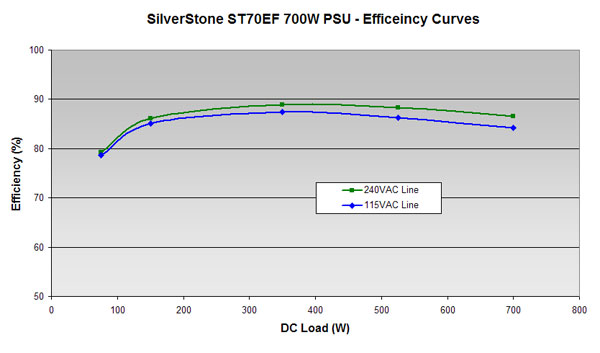 The overall efficiency of the SilverStone Element ST70EF 700W power supply is very good.  The efficiency appears to peak around 400W and remains consistently above 85% throughout most of the curve.

Earlier last year 80 Plus added three new certifications (Bronze, Silver, and Gold) to help differentiate and acknowledge PSUs that meet even higher efficiency specifications. The SilverStone Element ST70EF 700W is certified 80 Plus Silver, which means it should produce at least 85% efficiency while delivering between 20% and 100% load (140W to 700W) and at least 88% efficiency at 50% load (350W).

Spending a little more money up front to purchase a high efficiency power supply may very well pay for itself over the lifetime of the PC, especially when you are using this much power… 🙂
Differential Temperature and Noise Levels

To simulate real world operation the SilverStone Element ST70EF 700W power supply was mounted in a modified mid tower case (Lian Li PC60) during testing.  Some of the warm exhaust air from the PSU under test is recirculated back into the case, which allows the internal case air temperature to increase with load, just like it would in a real PC.

Below 400W output and 30°C inlet air temperature, the ST70EF 700W is very quiet thanks to its high efficiency and minimal waste heat.  As temperatures continue to build the load increases and the cooling fan eventually starts to speed up to where it becomes noticeable.  Note: I was not able to take SPL readings at the max load due to all the programmable DC load cooling fans running. 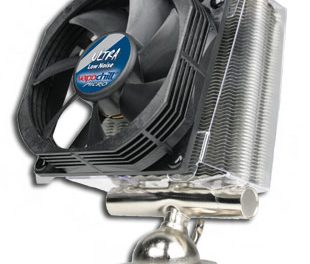